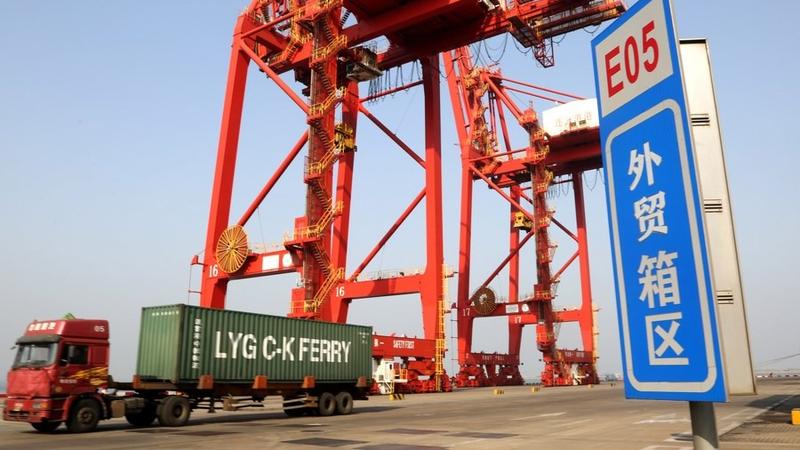 A container is being transported on a truck at the container terminal of the Lianyungang Port in Lianyungang city, east China's Jiangsu province, Jan 14, 2021. (PHOTO / XINHUA)

China's foreign trade will maintain upward momentum in the first half of 2021 after experiencing strong export performance between January and March, officials and experts said on Tuesday.

Driven by robust demand due to the rapid recovery in major economies, China's foreign trade amounted to 8.47 trillion yuan (US$1.29 trillion) in the first quarter of this year, up 29.2 percent year-on-year, according to the latest data released by the General Administration of Customs.

Thanks in part to the soaring demand for goods in markets in the European Union and the United States, there was significant growth in China's exports in the first quarter of 2021, with those to the EU rising 36.4% year-on-year and exports to the US surging 61.3% on a yearly basis

The substantial trade figures are partly due to the low base from the first quarter of last year, when China's foreign trade was hit by the COVID-19 pandemic, Customs spokesman Li Kuiwen said.

"Yet even compared with the same period in 2018 and 2019, the country's foreign trade in the first quarter still saw an increase of 25.3 percent and 20.5 percent, respectively," he said.

With the manufacturing purchasing managers index in major economies further improving in March, the official predicted that overseas economic recoveries will continue to accelerate and support China's exports.

Since the second quarter of last year, China's innovative foreign trade policies, in the face of the impact of pandemic, have continued to work. The government policies have played a vital role in cutting costs, preventing risks and expanding the market for its export-oriented companies, said Yu Yi, a spokesman for the Beijing-based China Council for the Promotion of International Trade.

Thanks in part to the soaring demand for goods in markets in the European Union and the United States－boosted by their governments' fiscal stimulus measures－there was significant growth in China's exports in the first quarter of 2021, with those to the EU rising 36.4 percent year-on-year and exports to the US surging 61.3 percent on a yearly basis.

The outlook for China's exports, advanced by vaccine availability and stimulus policies globally, will remain positive this year, with new business models such as cross-border e-commerce emerging as a new engine of the country's foreign trade, said Mei Xinyu, a researcher at the Chinese Academy of International Trade and Economic Cooperation in Beijing.

Experts said that while China's foreign trade will continue to climb in the second quarter, its overall growth rates could slow down. The recovery of overseas manufacturers, together with high global commodity and material prices, and the lagging effect of yuan appreciation, will put pressure on China's exports in the second quarter of this year.

With the easing of the pandemic and vaccinations becoming the norm throughout the world, overseas demand for medical supplies, daily necessities and work-at-home goods, such as laptops, will fall, while the recovery of other emerging economies' supply capacity will also affect China's exports and some orders may be diverted to other countries, said Zhang Yongjun, a researcher at the Beijing-based China Center for International Economic Exchanges.

China's trade with the Association of Southeast Asian Nations－its largest trading partner, jumped 26.1 percent year-on-year to 1.24 trillion yuan from January to March, while its exports and imports with 14 trade partners of the Regional Comprehensive Economic Partnership grew 22.9 percent year-on-year to 2.67 trillion yuan, accounting for 31.5 percent of its total foreign trade volume.