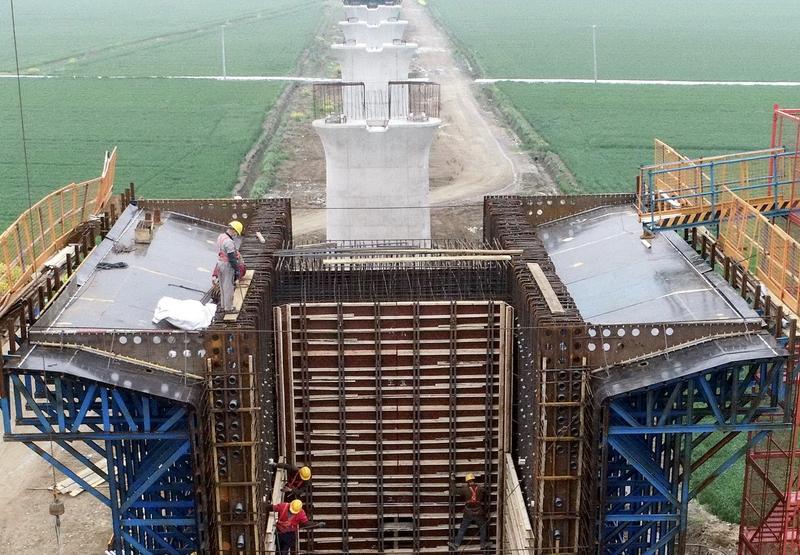 In this undated file photo, workers construct an intercity railway in Huai'an, Jiangsu province. The railway will connect the city with the provincial capital of Nanjing upon completion. (PHOTO BY ZHAO QIRUI / FOR CHINA DAILY)

China will speed up the planning and construction of intercity railway networks in key urban city and metropolis clusters, the country's top economic regulator said.

The government will accelerate interurban railway construction in the Beijing-Tianjin-Hebei region, the Yangtze River Delta region and the Guangdong-Hong Kong-Macao Greater Bay Area, according to the National Development and Reform Commission. Interurban railway is a type of electric railway, with streetcar-like electric self-propelled rail cars which run within and between cities or towns.

Industry experts said intercity railway development is advantageous for traditional as well as new infrastructure construction in the country while providing support for emerging industries of strategic importance including 5G, big data and artificial intelligence

Intercity rail transportation will be planned and constructed in city clusters to improve the comprehensive transport hubs in the country and create more integrated passenger transport hubs, it said.

Industry experts said intercity railway development is advantageous for traditional as well as new infrastructure construction in the country while providing support for emerging industries of strategic importance including 5G, big data and artificial intelligence.

Xie Xiaowen, a researcher with China Communications and Transportation Association, said the speeding up of intercity railway construction will improve the overall efficiency of urban transport and promote green development.

According to Song Jia, director of the machinery innovation center affiliated with the State-owned Assets Supervision and Administration Commission, intercity railway transportation, which is part of the new infrastructure construction, provides strong support for city cluster integration.

"One of the most important supporting measures for the coordinated development of the Beijing-Tianjin-Hebei region and the Yangtze River Delta region is rail traffic," he said.

"Intercity railways can not only support the integrated development of city clusters but also provide more room for application of emerging sectors of strategic importance."

The NDRC has also vowed to solve housing problems in big cities with various measures to stabilize the land price and housing price for the steady and healthy development of the real estate market.

It will further accelerate the development of the housing rental market, put existing housing resources to good use, vigorously and in an orderly way expand the supply of rental housing, improve the long-term rental housing policy and appropriately regulate rent levels, it said.