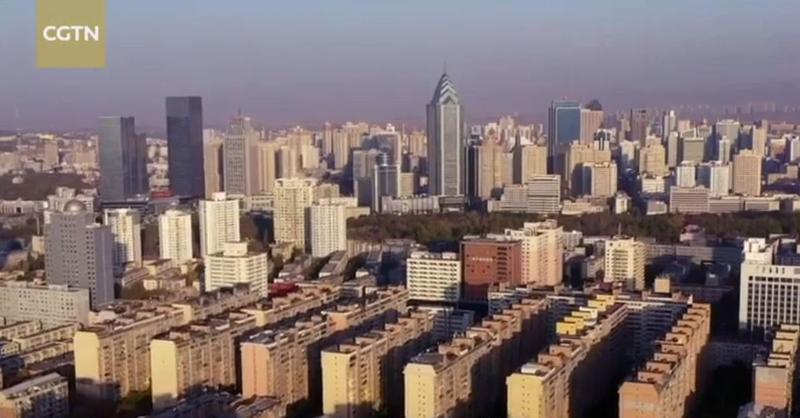 Screenshot from the documentary The War in the Shadows. (PHOTO / CGTN VIA CHINADAILY.COM.CN)

Chinese anti-terrorism and human rights scholars have voiced anger and called on the Western media and anti-China forces to recognize the tough and complicated anti-terrorism situation in the Xinjiang Uygur autonomous region, and to squarely face how local people have suffered when the region was frequently hit by bloody attacks.

While many people are shocked to see that certain former senior Xinjiang officials had secretly backed extremism, terrorism and separatism in the region, as a newly broadcast documentary shows, some Western media and anti-China forces have chosen to turn a blind eye to facts, and even labeled the documentary as China's latest move in a "propaganda campaign" to justify what they call "excessive anti-terrorism measures" in the region.

"They've deliberately ignored the facts that the 'two-faced people' have created big obstacles in fighting terrorist and extremist forces in the region, and caused great harm to the safety of Xinjiang people," said Shu Hongshui, deputy dean of Northwest University of Political Science and Law's anti-terrorism law department.

ALSO READ: Genocide in Xinjiang? Here are the facts

They've deliberately ignored the facts that the 'two-faced people' have created big obstacles in fighting terrorist and extremist forces in the region, and caused great harm to the safety of Xinjiang people.

People may find it unbelievable that some former Xinjiang officials could have the dream of establishing an independent state in Xinjiang, but that's only "the tip of the iceberg" when it comes to the region's complicated anti-terrorism situation, he added.

The War in the Shadows－a 55-minute documentary produced by China Global Television Network－has revealed how some officials hidden in government bodies backed the spread of extremism and terrorism in Xinjiang and collaborated with the East Turkestan Islamic Movement terrorist group. Such people are dubbed "two-faced people".

Since being broadcast on April 2, the documentary has drawn wide attention from home and abroad. According to CGTN, more than 323 media organizations from 39 countries and regions have reported on the documentary.

The documentary detailed how Shirzat secretly collaborated with extremists and even the East Turkestan Islamic Movement and backed their activities in Xinjiang. It also shows how Sattar controlled the compiling of the 2003 and 2009 Uygur-language textbooks for primary and middle schools in Xinjiang that even included the "national emblem" of so-called "East Turkestan".

Han Bing, the documentary's producer, said the documentary reveals the reasons behind terrorism and the fight against it from inside the region, which shows the region's determination in rooting out terrorism.

"It reveals things the outside may never have heard of or thought about. These factors are why the violent terrorism in Xinjiang was rampant and lasted so long. And why the Chinese government says the current security situation is only a preliminary victory," he wrote in his producer's notebook.

Xinjiang has long been the main battlefield against terrorism. Between 1990 and 2016, the region suffered thousands of terrorist attacks that killed a large number of innocent people and hundreds of police officers.

The spread of religious extremism from overseas had brought the seeds of terrorism, while poor education and a low employment rate in some rural areas had nurtured it, according to the regional government.

Identifying and removing "two-faced people" from inside government bodies is just a part of the measures introduced since 2014, when the region determined to root out terrorist attacks and ensure they would not spread to other parts of China.

Shu said it is apparent that Xinjiang's anti-extremism and anti-terrorism measures are working, because they have targeted the problems exposed straight on. No terrorist incident has taken place in Xinjiang for more than four years.

"The changes in Xinjiang's social stability situation have been tremendous in the past few years. People can now enjoy their lives in peace rather than living in constant fear of losing their loved ones," he said.

"Those Western media and anti-China forces are only denying the necessity and effectiveness of Xinjiang's anti-terrorism efforts because they want to stay biased, although the facts are right in front of their eyes."

Zeng Qingxiang, a professor at the Chinese Academy of Social Sciences' Institute of Journalism and Communication, said some Western media and politicians labeled the documentary as "propaganda", because they do not intend to report facts but only what is in line with their political agenda.

Foreign Ministry spokeswoman Hua Chunying said on April 2 that the documentary clearly showed that the region had suffered gravely from extremism and terrorism. She said Western countries have been fabricating lies, such as accusations of "genocide" and "forced labor", about Xinjiang to create turbulence and suppress China's development.

Xu Yao, a researcher at Nankai University's Institute of Human Rights Studies in Tianjin, said it is still too early to announce a victory in fighting extremism, terrorism and separatism in the region.

"Eliminating the negative impact brought to Xinjiang people by the long-term penetration of extremism and terrorism is a gradual process and takes time," Xu said. "Helping young people who were once influenced get back on track can be more challenging."