Phuket in mass vaccination drive ahead of the rest of Thailand 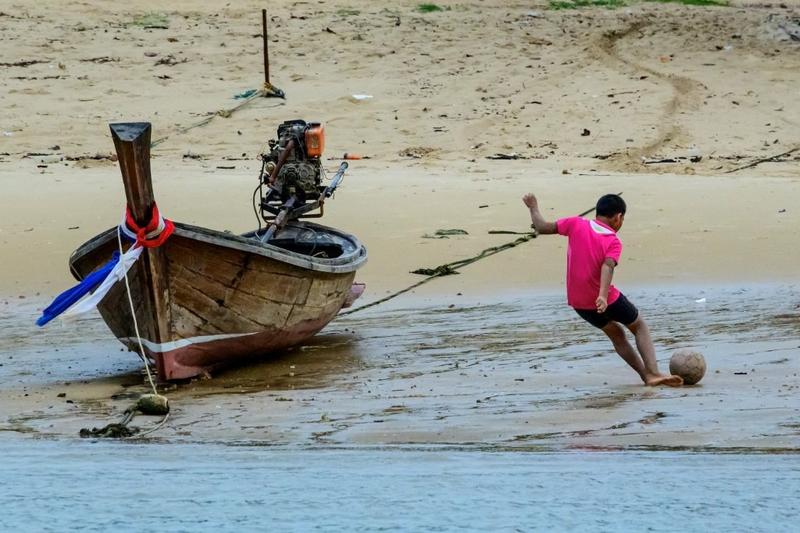 MUMBAI / KARACHI / JERUSALEM / PHUKET - In Thailand, it’s the all-important tourism sector that has jumped to the head of the COVID-19 vaccination line, with the country’s most popular resort island embarking on a mass inoculation programme two months ahead of the rest of the country.

The island of Phuket aims to deliver shots to at least 460,000 people - most of its population - as it gears up for July 1, when vaccinated overseas visitors will no longer be required to quarantine.

Phuket also has its own international airport and tourists would be able to roam the island freely without posing any coronavirus risk to the rest of Thailand’s population.

“If we can build immunity for 70-80 percent of the population on the island, we can receive foreign tourists who have been vaccinated without the need for quarantine,” Phuket’s Vice Governor Piyapong Choowong told Reuters.

Thailand’s Health Ministry plans measures to limit the spread of COVID-19 ahead of the Thai New Year holiday next week, after new clusters of infections were detected in night-entertainment venues around metro Bangkok.

“The situation has reached a critical level, with a 48 percent positivity rate from these nightclub clusters,” Deputy Prime Minister and Health Minister Anutin Charnvirakul said on Monday, adding that measures may include closures of clubs in districts that have reported new infections.

These new virus clusters are a repeat of outbreaks last year, when a high rate of infections were found among patrons and workers of bars and entertainment centers. Thailand reported 194 cases on Monday, a quarter of which were detected in Bangkok, the nation’s capital. The tally is also the highest single-day increase since March 23.

Cambodia on Monday confirmed 63 new local COVID-19 cases and one new death, the country's Ministry of Health (MoH) said in a statement.

Of the new infections, 31 were found in capital Phnom Penh, 22 in Svay Rieng province, six in Preah Sihanouk province, two in Kampong Chhnang province and two in Kandal and Prey Veng provinces, the statement said.

India added more than 100,000 coronavirus infections over the last 24-hours, a record increase that pushed its richest state to order offices to work from home and shut malls and restaurants through April.

Maharashtra, which houses financial hub Mumbai and contributes about 15 percent of national output, will halt all non-essential services from 8 p.m. on Monday. Private offices were asked to work from home, with some allowances for banks and stock exchanges.

The country reported 103,558 new infections, according to data from the federal Health Ministry Monday.

“There is an alarming rate of growth of COVID-19 cases and deaths in the country,” Prime Minister Narendra Modi’s federal government said in a statement over the weekend.

As infection numbers continue to spiral five Indian states are in the middle of local elections with thousands of people thronging to campaign rallies, while the northern Uttarakhand is marking the monthlong Hindu pilgrimage of the Kumbh Mela, which draws hundreds of thousands of people to the banks of the Ganges river.

Maharashtra is the epicenter of this fresh outbreak, which follows an unexplained lull in recent months that allowed businesses to re-open and fostered optimism among policy makers about a recovery in growth. The renewed restrictions will weigh on the central bank, whose officials meet Monday through Wednesday to decide monetary policy.

Brunei's Ministry of Health said that it's seeking cooperation from the public to wait for their turn and not to visit any vaccination centers at the moment. The ministry will inform the public on bookings for vaccination slots based on the stages of implementation.

Restrictions on people moving around the country will remain in place for two weeks starting April 6, a spokesperson for Indonesia’s Covid-19 task force said, with more areas included in this round.

The new cases included 1,527 in the capital Baghdad, 790 in Basra, 484 in Wasit, 433 in Sulaimaniyah, and 345 in Erbil, while the other cases were detected in other provinces, the ministry said in a statement.

The first consignment of vaccines allocated to Iran under the World Health Organization's COVID-19 Vaccines Global Access (COVAX) program has arrived in the country's capital, the country's Food and Drug Administration said on Monday.

The shipment, including over 700,000 doses of the Oxford/AstraZeneca COVID-19 vaccine, was shipped to Iran on Sunday night, Tasnim news agency reported, quoting Kianoush Jahanpour, the administration's spokesperson.

Iran's quota under the COVAX program amounts to 16.8 million doses, Jahanpour said, as Iranian cities are expecting another wave of COVID-19.

Iran's Minister of Industry, Trade and Commerce Ali Reza Razm-Hosseini has been infected with COVID-19, according to a report on Sunday.

Razm-Hosseini was expected to attend a meeting of the Iranian parliament's Economic Committee, but was absent due to his infection, said the spokesman of the committee Mehdi Toghyani, semi-official Mehr news agency reported.

The same day, Sima Sadat Lari, spokesperson for Iran's Ministry of Health and Medical Education, said at her daily briefing that 161 deaths from the coronavirus were registered in the past 24 hours in the country, taking the death toll in Iran to 63,160, according to the ministry's official website.

With Jerusalem emerging from COVID-19 curbs and the faithful flocking there again, Easter Sunday brought a message of renewal from the traditional site of Jesus’ death and resurrection.

Deserted a year ago after the pandemic hit, the Church of the Holy Sephulchre was attended by dozens of clergymen and worshippers, a turnout enabled by an Israeli vaccination campaign - the fastest in the world - that has driven down infections.

Israel's Ministry of Health reported 140 new COVID-19 cases on Sunday, raising the total confirmed cases in the country to 834,210.

The death toll from the virus rose by seven to 6,243, while the number of patients in serious condition decreased from 351 to 344, out of the 513 hospitalized patients.

This is the lowest number of patients in serious condition in Israel since Dec. 12, 2020 when it stood at 343.

The total recoveries in Israel rose to 822,615 with 867 newly recovered cases, while the number of active cases decreased to 5,352.

Japanese health authorities are concerned that variants of the coronavirus are driving a nascent fourth wave in the pandemic with just 109 days remaining until the Tokyo Olympics.

The variants appear to be more infectious and may be resistant to vaccines, which are still not widely available in Japan. The situation is worst in Osaka, where infections hit fresh records last week, prompting the regional government to start targeted lockdown measures for one month from Monday.

A mutant COVID-19 variant first discovered in Britain has taken hold in the Osaka region, spreading faster and filling up hospital beds with more serious cases than the original virus, according to Koji Wada, a government adviser on the pandemic.

The Kuwaiti Health Ministry reported on Sunday 1,203 new COVID-19 cases, bringing the total infections in the country to 237,192.

The ministry also announced 14 more fatalities, taking the death toll to 1,353, while the tally of recoveries rose by 1,422 to 221,943. A total of 13,896 coronavirus patients are receiving treatment, including 224 in the intensive care units.

The Kuwaiti government has decided to further shorten the curfew by one hour to last from 7 p.m. to 5 a.m. local time, and allow walk inside residential areas from 7 p.m. to 10 p.m. from April 8 to April 22.

Among the new cases, 123 were registered in the capital city of Bishkek, which remains the hardest-hit area in the country.

A total of 107 new recoveries and one more virus-related death were reported, bringing the total number of recoveries to 85,271 and the death toll to 1,507, according to the headquarters.

Lebanon has been fighting against the virus since Feb. 21, 2020.

A total of 9,804 COVID-19 tests were conducted across the country on Sunday, and 602 of them were positive, the NCCD said in a statement.

Myanmar reported 14 COVID-19 cases on Sunday, bringing the tally in the country to 142,511, according to a release from the Ministry of Health and Sports.

No new death was reported on Sunday, leaving the death toll at 3,206 in the country, the release said.

According to the ministry's figures, a total of 131,815 patients have been discharged from the hospitals and over 2.54 million samples have been tested for COVID-19 so far.

The Nepali government has decided to administer the COVID-19 vaccine donated by China on Wednesday amid resurging cases of novel coronavirus in the Himalayan country, an official of the Ministry of Health and Population said.

On March 29, a batch of Chinese COVID-19 vaccines developed by Sinopharm was delivered to Nepal.

"The Chinese vaccine will be inoculated among people starting from Wednesday," Jageshwor Gautam, spokesperson at the health ministry, told a press conference.

"Those involved in essential services, students studying in China under the Chinese government scholarship but are currently stuck in Nepal due to pandemic, Nepali students preparing to leave for China for the higher study and people involved in cross-border trade between Nepal and China will be inoculated with the Chinese vaccine."

First batch of the Sinopharm COVID-19 vaccines purchased from China arrived in Jordanian capital Amman on Sunday, as the kingdom's endeavor to strengthen its mass inoculation campaign against the pandemic.

Chinese Ambassador to Jordan Chen Chuandong said in a statement that China and Jordan have supported each other in combating the COVID-19 pandemic, which reflects the value of the Chinese-Jordanian strategic partnership and profound friendship between the two countries and their people.

Meanwhile, 2,038 people recovered during the past 72 hours, taking the overall recoveries to 146,677 while 31 deaths were reported, pushing the death toll up to 1,712, according to a ministry statement quoted by ONA. 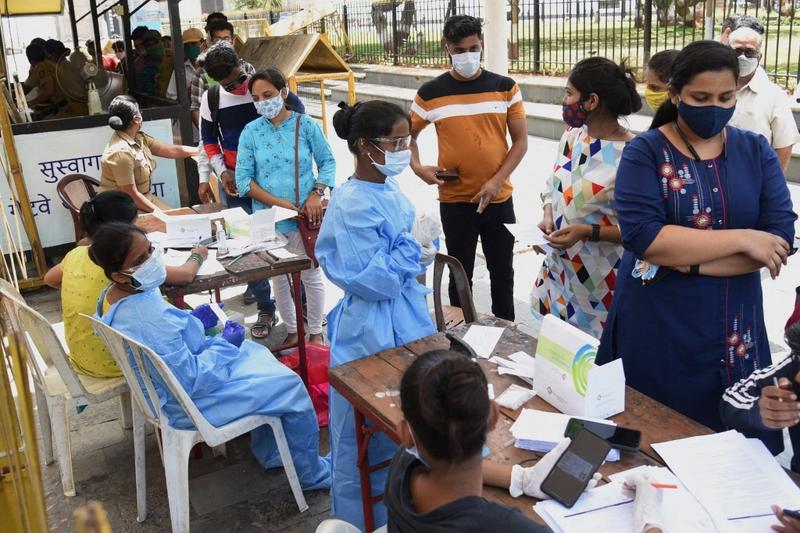 People register to get tested for a compulsory COVID-19 coronavirus test before visiting the getaway of India in Mumbai on April 3, 2021. (SUJIT JAISWAL / AFP)

Thousands of Pakistanis rushed to get inoculated in the first round of commercial sales of COVID-19 vaccines that began over the weekend, with vaccination sites in the southern city of Karachi saying on Sunday they had already sold out.

Pakistan is currently offering free vaccines to frontline healthcare workers and people over the age of 50, but the drive has thus far been slow, and last month the country allowed commercial imports by the private sector for the general public.

The first round saw the commercial sale of the two-shot Russian Sputnik V to the general public for about 12,000 Pakistani rupees (US$80) for a pack of two doses.

Despite the cost, a number of centres offering the shot reported long queues, with some in Karachi waiting in line for close to three hours. Most in the queue were young Pakistanis still not eligible for government’s free vaccination.

Meanwhile, 481 more recovered from the virus, bringing the overall recoveries to 165,952, while the fatalities increased by two to 303, according to a ministry statement quoted by QNA.

Singapore is maintaining its end-2021 schedule to vaccinate its population against coronavirus and plans to invite those under the age of 45 from June to get their first jab, Senior Minister of State at the Health Ministry Janil Puthucheary told parliament.

South Korea reported 473 more cases of COVID-19 as of midnight Sunday compared to 24 hours ago, raising the total number of infections to 105,752.

The daily caseload was down from 543 in the previous day, falling below 500 in six days amid fewer virus tests over the weekend.

The daily number of infections hovered in triple digits since Nov. 8 owing to small cluster infections in Seoul and its surrounding Gyeonggi province as well as imported cases.

The Philippines' Department of Health (DOH) reported on Monday 8,355 new COVID-19 infections, bringing the total number of confirmed cases in the Southeast Asian country to 803,398.

The death toll climbed to 13,435 after 10 more patients died from the viral disease, the DOH said.

The steady rise in cases prompted the government to reimpose a raft of strict lockdown restrictions in Metro Manila and four adjacent provinces to contain the spread of the virus. Metro Manila is still the epicenter of the outbreak, with the most active and new cases.

The Philippines, with a population of about 110 million, has tested over 9.7 million people since the outbreak in January 2020.