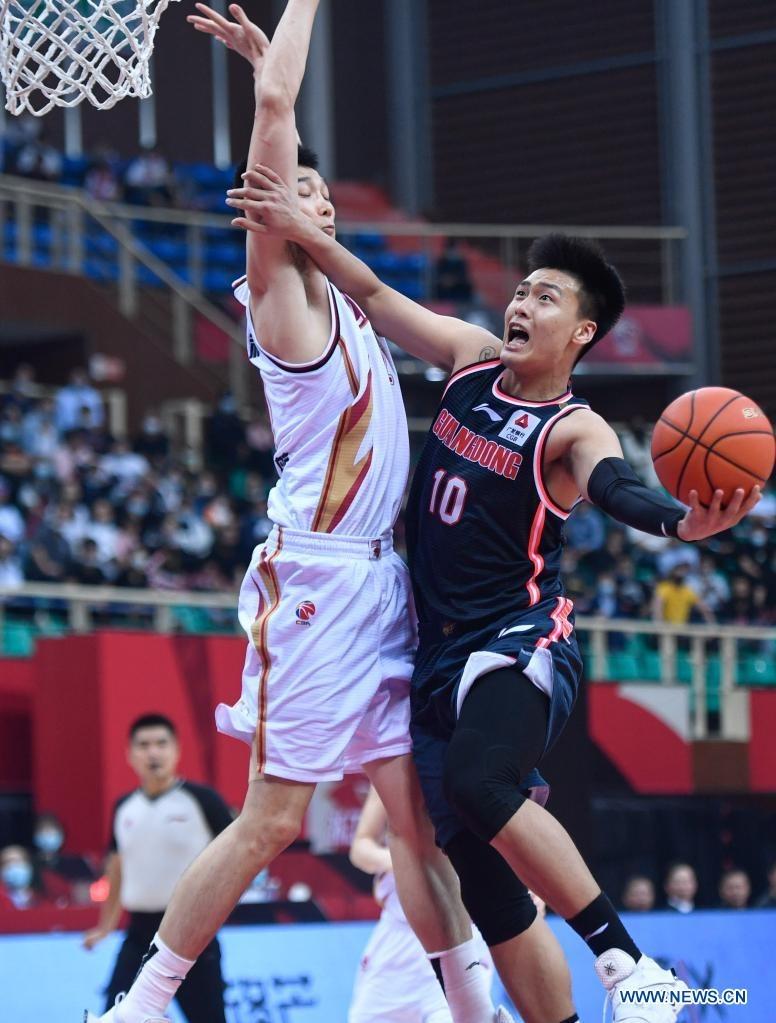 ZHUJI, China - Defending champion Guangdong Southern Tigers erased a double-digit deficit in a final-quarter comeback, beating the third-placed Zhejiang Golden Bulls 125-119 in the 50th round of the 2020-21 regular season of the Chinese Basketball Association here on Monday.

In another game, Robert Golden's triple-double along with Wang Zhelin's double-double lifted the Fujian Sturgeons to a win over the Shenzhen Aviators 114-102

The result of the matchup would make little difference in the standings as both the archrivals had already made it into the playoffs, but the game was still highly anticipated as the pair have a storied history. Zhejiang upset Guangdong 138-113 in the season's opening game, and Guangdong took revenge in the 11th round 133-125.

The defending champions trailed by as many as 11 points in the second quarter, during which Zhejiang's Zhu Xuhang shone from beyond the arc and led the first half with 22 points, including four three-pointers.

Guangdong went into the fourth quarter at 95-85, but a 12-2 run highlighted by three-pointers from Du Runwang and Sonny Weems soon tied the game for Guangdong. The teams were neck and neck before Weems stormed another spree and enlarged the gap to 119-112 with less than two minutes on the clock, sealing a comeback win for Guangdong.

Zhejiang's starting point guard Wu Qian picked up an injury at the beginning of the second half. It is still unclear if Wu will miss the rest of the season.

The other side from Zhejiang secured a victory earlier in the day. The Zhejiang Lions (Guangsha) led from start to finish and smashed the Beijing Ducks 116-93 thanks to excellent performances from Hu Jinqiu and Sun Minghui.

The fifth-placed Lions had some ups and downs after the Spring Festival, suffering five defeats in their previous nine games, while the Ducks had won eight out of their last ten games, moving up to the eighth place after getting rid of their early-season sluggishness. Neither team had assured a playoff berth before the encounter.

Sun's 10 points led Guangsha to a dream start with a 24-2 lead within eight minutes, and Hu's control in the paint helped Zhejiang manage to keep a 56-50 lead into the interval despite losing the second quarter 30-22.

The second half saw Hu finely-tuned as he only missed one shot, contributing 17 points and nine rebounds in the last two quarters. The game was over early as the gap was never less than 20 points in the latter phase of the final quarter.

In other games, Robert Golden's triple-double (42 points, 12 rebounds, and 11 assists) along with Wang Zhelin's double-double (21 points, 17 rebounds) lifted the Fujian Sturgeons to a win over the Shenzhen Aviators 114-102, and the Shanghai Sharks beat the Shanxi Loongs 103-93.

Five games remain to be played in the 50th round. The Jiangsu Dragons face the Beijing Royal Fighters, the Guangzhou Loong Lions take on the Jilin Northeast Tigers, the Qingdao Eagles battle the Nanjing Monkey Kings, the Shandong Heroes encounter the Tianjin Pioneers, and the Xinjiang Flying Tigers play the Liaoning Flying Leopards.