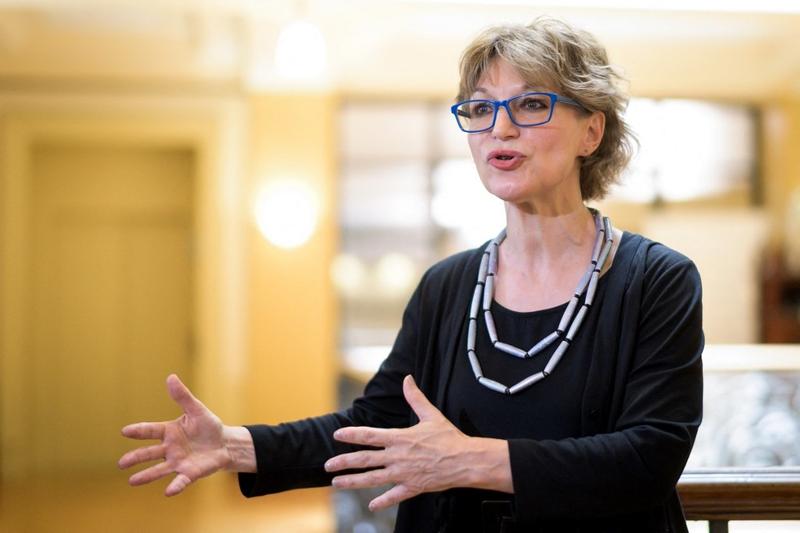 In this file photo taken on June 19, 2019, UN expert on summary skillings Agnes Callamard answers questions on a report of the killing of Saudi journalist Jamal Khashoggi in Geneva. A Saudi official on March 25, 2021 denied he threatened UN investigator Agnes Callamard following her probe into journalist Jamal Khashoggi's 2018 murder, after the UN confirmed she was issued a death threat. (FABRICE COFFRINI / AFP)

DUBAI - A senior Saudi official denied on Thursday he had threatened to harm the human rights expert who led the UN investigation into the murder of journalist Jamal Khashoggi, after the United Nations backed the expert’s account of the threat.

Agnes Callamard, the UN expert on summary killings, has said that a Saudi official threatened at a Jan 2020 meeting in Geneva that she would be “taken care of” if she was not reined in following her investigation into the journalist’s murder.

She said the remark was interpreted by UN officials as a “death threat”. The United Nations human rights office confirmed her account on Wednesday.

While I cannot recall the exact conversations, I never would have desired or threatened any harm upon a UN-appointed individual, or anyone for that matter.

Neither Callamard nor the United Nations has identified the Saudi official who made the remark. However, the head of Saudi Arabia’s human rights commission, Awwad Alawwad, identified himself as the official on Thursday, while denying he had intended any threat.

“It has come to my attention that Ms. Agnes Callamard ... and some UN officials believe I somehow made a veiled threat against her more than a year ago,” Alawwad tweeted.

“While I cannot recall the exact conversations, I never would have desired or threatened any harm upon a UN-appointed individual, or anyone for that matter,” he said.

He described himself as an advocate for human rights, and said: “I am disheartened that anything I have said could be interpreted as a threat.”

A Western diplomat in Geneva told Reuters the threat allegations should be investigated.

“The credible charges by UN officials that a senior Saudi government representative attempted to intimidate a UN human rights investigator with threats of physical violence raise grave concerns about Saudi Arabia’s commitment to protecting human rights and deserve a full investigation by proper UN authorities,” the diplomat said, asking not to be identified.

Callamard led a UN investigation into the October 2018 killing of US-based journalist Khashoggi by Saudi agents at the kingdom’s Istanbul consulate. She issued a report in 2019 concluding there was “credible evidence” that Saudi Crown Prince Mohammed bin Salman and senior Saudi officials were responsible.

Callamard’s allegation that she was threatened was first reported in the Guardian newspaper on Tuesday.

“A death threat. That was how it was understood,” Callamard told the newspaper. “People that were present, and also subsequently, made it clear to the Saudi delegation that this was absolutely inappropriate.”

UN human rights spokesman Rupert Colville said on Wednesday “the details in the Guardian story about the threat aimed at Agnes Callamard are accurate”. On Thursday, he provided additional detail, telling Reuters the Saudi official had made the remark interpreted as threatening twice.

“At one point he said: ‘I’m taking phone calls from people ready to take care of this if you don’t’,” Colville said. “And then later on essentially he repeated almost the same thing. He said: ‘I know some people who have offered to take care of the problem if you don’t.’ So to us the message was pretty clear.”

Callamard has called for sanctions against Prince Mohammed over the killing of Khashoggi. The prince denies any involvement but has said he bears ultimate responsibility as it happened under his watch.