Boycott of Xinjiang cotton use opposed

By Cui Jia and Zhao Yimeng 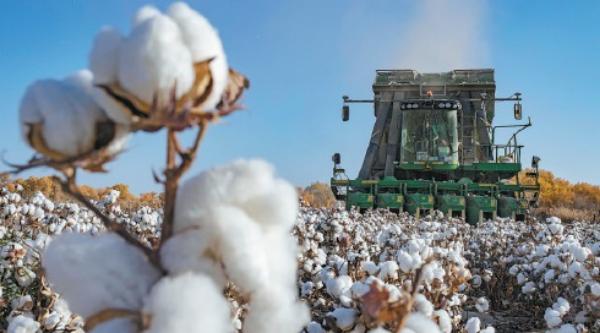 China firmly opposes any sanction imposed on individuals or entities based on the pretext of so-called human rights issues in the Xinjiang Uygur autonomous region, and companies involved should avoid politicizing business issues, a spokesman for the Ministry of Commerce said on Thursday.

The remarks came after the Chinese public voiced outrage upon finding out that some big international retail brands, including H&M and Nike, have chosen not to source cotton from Xinjiang over "forced labor" concerns

The remarks came after the Chinese public voiced outrage upon finding out that some big international retail brands, including H&M and Nike, have chosen not to source cotton from the region over "forced labor" concerns based on lies and false information.

"The so-called forced labor in Xinjiang is nonexistent and entirely imaginary. The spotless white Xinjiang cotton brooks no slander," Ministry of Commerce spokesman Gao Feng said on Thursday at a news conference in Beijing.

With regard to the so-called business decisions made by certain foreign companies based on erroneous information, Chinese consumers have responded with concrete actions, he said.

"We hope these companies will respect the law of the market, rectify their erroneous actions and avoid politicizing business issues," Gao said.

Chinese social media users began to call on Wednesday for a boycott of H&M, the world's second-largest clothing retailer, after the Swedish company said in a statement that it wouldn't work with any Xinjiang garment manufacturing factories, nor would it source products from the region, because the company was concerned about reports of accusations of forced labor in the region.

Although the company's statement was first posted on its website last year, it drew wide attention after some Chinese social media accounts reposted it on Wednesday. As of Wednesday evening, H&M products had been removed from all major Chinese e-commerce platforms, including Taobao and JD.

Furthermore, Chinese netizens have noticed that international companies including Nike, Adidas and Uniqlo had all issued similar statements about Xinjiang, which triggered calls for boycotts of those brands as well.

After Chinese consumers called for boycotts, many of the companies, including H&M and Nike, removed the statements on Thursday from their websites

After Chinese consumers called for boycotts, many of the companies, including H&M and Nike, removed the statements on Thursday from their websites. Many Chinese celebrities announced on Thursday that they will cut ties and stop commercial operations with the brands for their decisions on Xinjiang cotton.

The companies that issued the statements about a halt to sourcing cotton from Xinjiang are all members of the Better Cotton Initiative, a Switzerland-based organization.

On March 30 last year, the BCI announced that it would suspend cooperation with licensed farmers in Xinjiang during the 2020-21 cotton season over allegations of forced labor in the region.

However, the BCI's office in Shanghai issued a statement on March 1 this year, in response to inquiries about the situation in the region, saying that not a single case of forced labor had been found in Xinjiang.

Ryohin Keikaku Co Ltd, which operates the MUJI brand, also said in a statement on March 1 that the company had recently undertaken enhanced due diligence of factories in Xinjiang that are indirectly related through the supply chain. The statement said no significant issues were identified, and the only issues that were noted can be corrected by farms or ginning factories taking steps to make immediate improvements.

China is the world's second-largest cotton producer, and Xinjiang is the largest cotton-producing area in the country. The region is well known for its premium, long-fiber cotton, which is popular in domestic and global markets.

Xinjiang manufactured 5.2 million metric tons of cotton during the 2020-21 season－about 87 percent of the nation's total production. More than 50 percent of farmers in Xinjiang grow cotton, and over 70 percent of these farmers are members of ethnic minority groups including Uygur, Kazak and Hui.

The region's cotton and textile industry has created jobs for more than 600,000 local people, according to a statement released on Thursday by the China Cotton Association.

Since the quality of Xinjiang cotton ranks among the best in the world, the companies that choose not to use it are losing out, Foreign Ministry spokeswoman Hua Chunying said at a daily news briefing on Thursday. In addition, she said, accusations of "forced labor" in Xinjiang are fabricated by anti-China forces to contain China's development.

Although China is a key global cotton producer, it actually faces a cotton shortage. The country produced 5.95 million tons of cotton during the 2020-21 season, which ended in January, but the demand stood at about 7.8 million tons, the China Grain Reserves Group said in a statement on Wednesday.

To resolve the shortage, China needs to import about 2 million tons of cotton every year from countries including Brazil and India, it said.

H&M has about 400 stores around China. On Thursday afternoon, few people were seen at one of the biggest H&M outlets－a three-story store in the popular Sanlitun shopping area in Beijing's Chaoyang district.

The majority of more than a dozen customers randomly interviewed by China Daily in Sanlitun were aware of the calls for boycotts.

Fu Dan, who works in the computer chip industry, said he totally supports the move to pull H&M products from e-commerce platforms.

"It's an insult to our nation, as they make a profit from us while boycotting cotton made in Xinjiang. That is unacceptable," the 29-yearold said."We can substitute clothes and products, but our country is irreplaceable. We can buy domestic clothing brands in the future."

Shi Yi was among those shopping at the H&M store on Thursday afternoon."When I studied in Australia, I often heard news with false information about China. The locals really fell for rumors like that. Foreign countries do have misunderstandings about China. But I may keep buying H&M clothes," the 20-year-old said.

"It's only natural for the Chinese people to feel frustrated," Foreign Ministry spokeswoman Hua said. "The Chinese people are entitled to express their feelings. They also attach great importance to national dignity. It's not about nationalism but patriotism."

Gao, the Commerce Ministry spokesman, also made it clear that the Chinese government always welcomes and supports the normal business operations of transnational corporations in China and their efforts to build industrial and supply chains.

"We welcome foreign companies to come and visit Xinjiang themselves, and stand ready to provide support for companies from all countries to trade and invest in Xinjiang," he added.

Meanwhile, shares of Chinese sports brand Anta Sports Products Ltd jumped over 8 percent in Hong Kong on Thursday after the company issued a statement saying it will continue to use cotton from Xinjiang. Shares of China's Li Ning Co surged over 10 percent.

Shares of H&M had fallen by 4.16 percent in trading in Stockholm, Sweden, as of 9 pm on Thursday, with the company facing a storm of social media criticism in China.