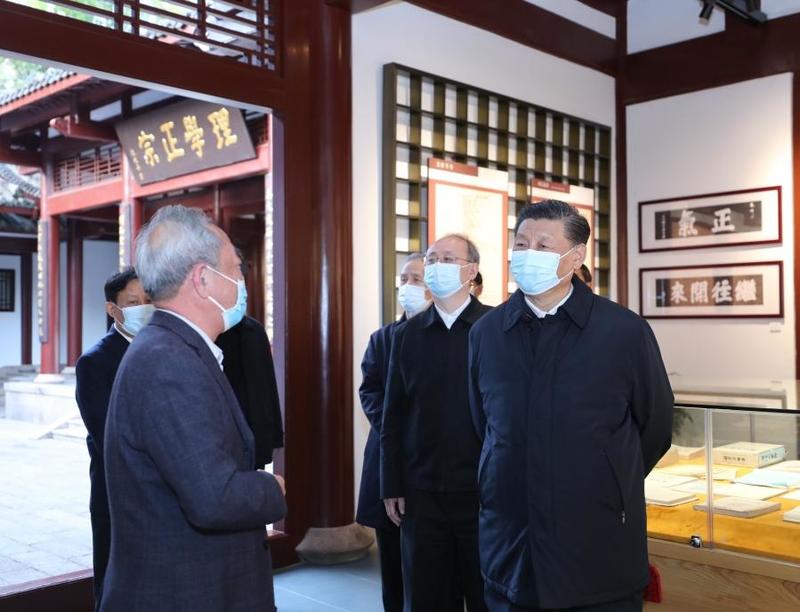 President Xi Jinping has highlighted cultural confidence and underlined the importance of carrying forward the nation's fine traditional culture, saying that the success of socialism with Chinese characteristics results from the 5,000-year-old Chinese civilization.

Xi made the remark when visiting a park dedicated to Zhu Xi, a renowned philosopher of the 12th century, during an inspection tour of Fujian province. Wuyishan, the city where the park is situated, was the first leg of the inspection, which started on Monday.

Xi made the remark when visiting a park dedicated to Zhu Xi, a renowned philosopher of the 12th century, during an inspection tour of Fujian province

During the visit, Xi learned of the achievements of Zhu Xi, who absorbed the merits of the ideologies of Confucius and later generations and developed neo-Confucianism－which is considered an outstanding representative of Confucian culture. The ancient philosopher put forward concepts such as "the people are the foundation of a nation", embodying the people-centered philosophy in ancient China.

While taking the path of socialism with Chinese characteristics, China must continue to adapt Marxism to its actual conditions, he stressed.

Xi called for special attention to be paid to exploring the essence of the fine traditional Chinese culture and integrating it with the Marxist stance, viewpoint and methodology, and unswervingly following the path of socialism with Chinese characteristics.

On Monday afternoon, Xi also visited an intelligent management center in Wuyishan National Park and an eco-friendly tea plantation, where he learned about local efforts to promote environmental protection and develop the tea industry.

Xi worked in Fujian in various posts between 1985 and 2002, and he knows very well how important it is to develop the tea industry in the province. Its tea production is considered to be one of the most important in the world in terms of both its high quality and varieties.

While visiting the tea plantation in Xingcun township, he was delighted to learn that the quality of tea has improved and farmers' incomes have increased as eco-friendly methods have been adopted over the years under the guidance of technical professionals.

The time-honored tea culture, a suitable climate for growing tea, rich tea resources and technological support have contributed to the thriving of the tea industry, Xi said.

"In the past, the tea industry was a pillar in your fight against poverty, and it should become a pillar industry of rural vitalization in the future," Xi said.

He called for coordinated efforts to promote the tea culture, the development of the tea industry and the use of technology in the sector.