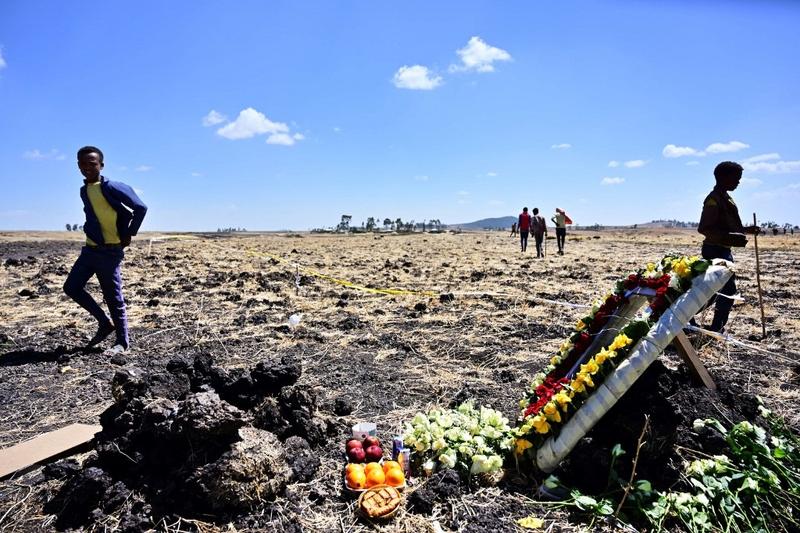 People walk by a commemorative wreath and fruits left by relatives of victims at the crash site of an Ethiopian airways operated Boeing 737 MAX aircraft on March 16, 2019 at Hama Quntushele village near Bishoftu in Oromia region, Ethiopia. (TONY KARUMBA / AFP)

Families of victims of the deadly 2019 Ethiopian Airlines jet crash may obtain as soon as Thursday Boeing’s reports to US regulators that helped keep its 737 MAX flying after a prior disaster with the same jet in Indonesia five months earlier.

The National Transportation Safety Board (NTSB), an independent US government investigative agency, told Boeing Co in a letter on Monday it should turn over nearly 2,000 documents to lawyers representing families who want to determine what the company knew about its flight systems after the Indonesian crash on Lion Air.

Any evidence showing that Boeing executives were aware of the 737 MAX problems could expose Boeing to huge punitive damages, which are unusual in air transportation accidents because planes rarely fly with a known deadly defect

The agency said international rules mandate the release of the documents after two years from the crash date, even though Ethiopia has yet to produce a final crash report which the agency cited in blocking the documents until now, according to the letter reviewed by Reuters.

Boeing said it plans to produce the investigation-related information to the plaintiffs beginning today following the NTSB guidance that, at the second anniversary of the Ethiopian accident, the restrictions would be lifted.

The plaintiffs lawyers said they expect the papers to show what Boeing executives knew of defects in the flight system of the newly designed aircraft following the Indonesian crash. An automated flight-control system called MCAS has been implicated in both crashes, which together killed 346 people.

The plane continued to fly until the Ethiopian crash prompted a global grounding.

“What we want to see are the documents upon which Boeing resisted the grounding of the airplane and based its assertion to its customers that the airplane was safe,” plaintiffs’ attorney Justin Green told Reuters.

Any evidence showing that Boeing executives were aware of the 737 MAX problems could expose Boeing to huge punitive damages, which are unusual in air transportation accidents because planes rarely fly with a known deadly defect.

Boeing has already provided plaintiffs 112,587 documents encompassing millions of pages, Greene said, but the records under pursuit are believed to be an important part of the case.

Boeing has said it has implemented changes that ensure accidents like the ones in Indonesia and Ethiopia never happen again, and numerous aviation regulators have re-approved the plane for flight.

The company resolved a 737 MAX criminal probe in January with a US$2.5 billion Department of Justice settlement and has mostly settled the Lion Air crash litigation. 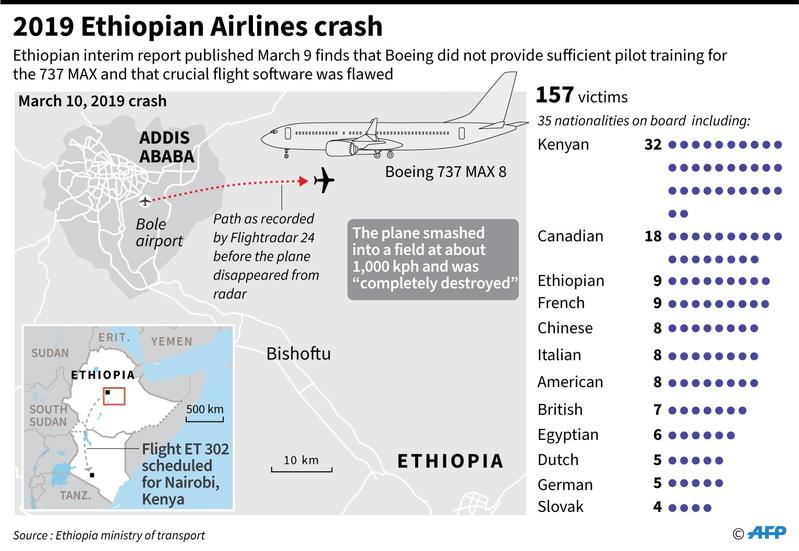 It still faces an investor lawsuit in Delaware against its board and around 140 lawsuits by families of the Ethiopian crash.

In the DOJ settlement Boeing admitted that two of its 737 MAX technical pilots, who are still under criminal investigation, had deceived the US Federal Aviation Administration (FAA) about MCAS.

While the settlement exonerated Boeing’s senior managers, legal experts said it bolsters one part of the plaintiffs’ punitive claim that Boeing intended to defraud the FAA and succeeded.

However, the experts said punitive damages are rarely awarded in aircraft crash cases, in part because they are difficult to prove.

Boeing could argue, for example, that the Ethiopian Airlines’ pilots were informed after the Lion Air crash about the steps to follow in the event of an MCAS failure, said Kenneth Quinn of International Aviation Law.

Still, Boeing will likely work hard to settle the cases and avoid a jury trial, a path followed by most companies involved in crash lawsuits, according to Gary Kennedy, former general counsel for American Airlines.

“From the company’s perspective, the worst thing is a headline that relives the final moments of someone’s life onboard that aircraft,” said Kennedy, who was with American during litigation stemming from the Sept. 11, 2001 attacks and a separate deadly crash in New York two months later.