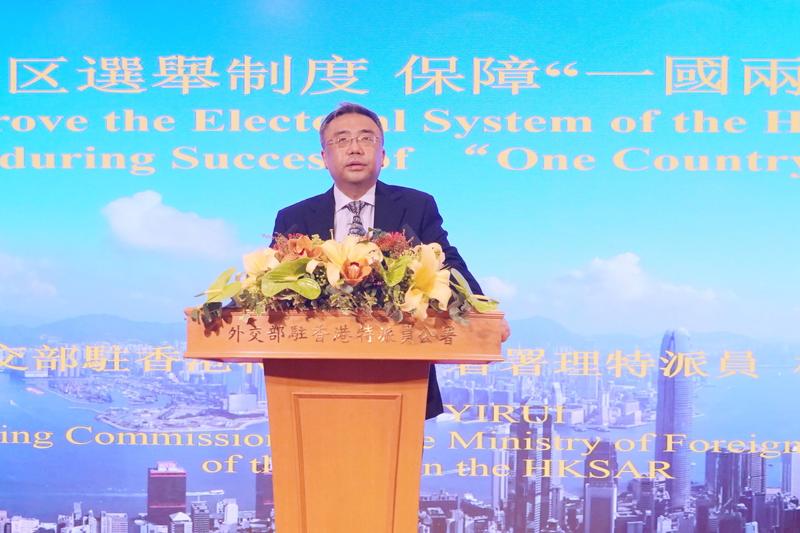 HONG KONG - The loopholes in the electoral system of Hong Kong must be closed with the utmost urgency to fundamentally resolve the problems in the Hong Kong Special Administrative Region, Acting Commissioner of the Ministry of Foreign Affairs of China in the HKSAR Yang Yirui said Monday.

Yang made the statement during a briefing he hosted on the improvement of the electoral system of the HKSAR for the consular corps in Hong Kong. Heads or representatives from consulates-general of 59 countries and the European Union Office to Hong Kong attended the event.

If the chaos in the elections were left unchecked and anti-China troublemakers were allowed to worm their way into the governance structure and unscrupulously endanger national security and Hong Kong's prosperity and stability, the city would be plunged into violence, with its status as an international financial, shipping and trading center under threat, and the interests of the international community here in peril, Yang said.

If the chaos in the elections were left unchecked, the city would be plunged into violence, with its status as an international financial, shipping and trading center under threat, and the interests of the international community here in peril

He said the deliberation of the draft decision on improving the HKSAR's electoral system at the fourth session of the 13th National People's Congress (NPC) is to carry out the "patriots administering Hong Kong" principle and the original mission of "one country, two systems" in the electoral system of Hong Kong, and is legitimate, reasonable and necessary.

Yang emphasized that it is a common constitutional arrangement and political practice in unitary states that the central government determines local electoral systems.

It is also a universal political principle that those who govern shall meet rigorous standards of patriotism in order to be eligible. The decision to improve the electoral system of the HKSAR made by the NPC, the highest organ of state power, is in line with the Constitution, the Basic Law and international norms and has solid political and legal foundation, he said.

Yang said that the implementation of the "patriots administering Hong Kong" principle and the improvement of the electoral system of the HKSAR will help to stop destabilizing forces from obstructing Hong Kong's development at the legislature, improve the relationship between the executive and legislative branches, and enhance the capacity and efficacy of governance.

It will help to bridge differences and build consensus, channel resources into the top priority of boosting economy and improving people's livelihood, and strengthen Hong Kong's role as an international financial, trading and shipping center, Yang said.

He said it will also help to develop a democratic electoral system suited to Hong Kong's reality and reflecting the overall interests of the community, and ensure broad and balanced political participation of Hong Kong compatriots in accordance with the law.

The central government of China stays firmly committed to implementing the policies of "one country, two systems" and "Hong Kong people administering Hong Kong" with a high degree of autonomy, Yang said.

The Chinese side hopes the consular corps in Hong Kong and the international community at large will abide by the principle of non-interference, a basic norm of international relations, he added.

Yang also said that the Chinese side hopes the international community would fully and accurately understand "one country, two systems", view the central government's improvement of the electoral system of the HKSAR in an objective and rational manner, and together work for a prosperous and stable Hong Kong.

In response to a question about China's take on the remarks by a very few countries expressing "concerns" about the electoral reform and threatening with further actions, Yang pointed out that Hong Kong affairs are China's internal affairs and are crucial to China's core interests.

China's policies and measures on Hong Kong issues have gained understanding and support among the majority of the international community. Facts speak louder than words, and justice will always prevail, he said.

For instance, 70 countries made a joint statement and more than 20 other countries spoke separately at the 46th session of the United Nations Human Rights Council in support of China's stance on Hong Kong, he added.

Yang said that while a very few countries, driven by political motives and ideological bias, have made irresponsible remarks and even threats to meddle with the central government's decision to improve Hong Kong's electoral system, their attempts are doomed to be futile.

Such interference will not reverse the historical trend of the restoration of stability in Hong Kong and the enduring success of "one country, two systems", nor will it undermine China's determination to fully and faithfully implement this principle, Yang said.

On the contrary, it will only further unite the Chinese people, including Hong Kong compatriots, in an effort to safeguard national sovereignty, security and development interests, he added.