Japan's green future requires returning to its nuclear past 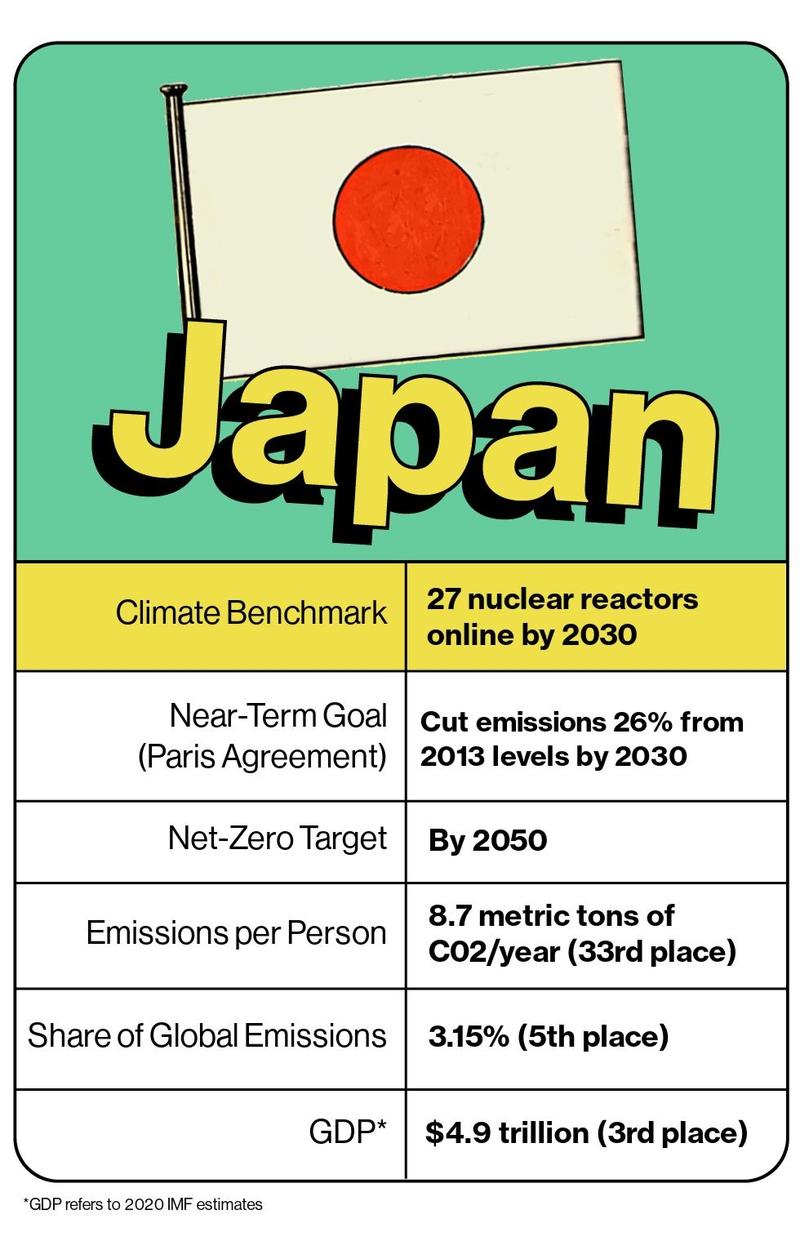 About once a month, the same group of two dozen Japanese government officials, company executives and professors file into a bland white and beige conference room at the nation's economy, trade and industry ministry to plot its long-term energy future.

Each has a printed agenda, tablet computer and carton of green tea neatly laid out before them, and politely flips over a rectangular name card to request a turn to speak. Beneath the rigid formality, there’s an increasingly divisive debate: what’s the role of nuclear energy a decade after the Fukushima disaster.

Since Japan pledged in October to become carbon neutral by 2050, many among the advisory group have reached the same conclusion. To meet its global climate commitments, the country will need to restart almost every nuclear reactor it shuttered in the aftermath of the 2011 meltdowns, and then build more.

Nuclear now accounts for about 6 percent of Japan’s energy mix, down from roughly 30 percent of the Fukushima disaster

That’s a daunting technical challenge that’ll require the nation to rapidly accelerate the resumption of idled operations and find a permanent solution to the meddlesome problem of storing radioactive waste. Equally difficult for Prime Minister Yoshihide Suga’s government will be persuading wary regulators and a wide sweep of Japan’s public who harbor deep concerns over safety.

“We had better hurry and rebuild trust in nuclear power,” said Masakazu Toyoda, a member of the 24-strong government panel that’s devising new policies. “This is a matter of energy security.”

Japan must have 27 of its remaining 36 reactors online by 2030 to hit its obligations under the Paris climate accord, according to Toyoda. Other estimates put that figure at closer to 30. So far, only 9 units have been fired back up since a program of restarts began in 2015.

Nuclear now accounts for about 6 percent of Japan’s energy mix, down from roughly 30 percent of the Fukushima disaster. In the immediate aftermath, Japan closed all its 54 reactors, around a third of which were permanently scrapped.

More than 160,000 people were evacuated from the region surrounding the Fukushima Dai-Ichi plant after a magnitude 9 earthquake in March 2011, the biggest ever recorded to hit Japan, caused a massive tsunami that overwhelmed the facility, shut off power to cooling systems and led to meltdowns of three reactor cores.

The incident convinced some governments that nuclear power’s risks far outweighed its benefits, and prompted some including Germany to set deadlines to close down their fleets of plants.  Mammoth costs of building new facilities, and frequent delays, have since served as other deterrents to the fuel’s revival.

China plans to have 70 gigawatts of nuclear generation capacity by 2025 as it aims to zero out emissions by 2060.

Still, China plans to have 70 gigawatts of nuclear generation capacity by 2025 as it aims to zero out emissions by 2060. That’s the equivalent of adding about 20 new reactors.

Nuclear energy produces about 10 percent of the world’s electricity, down from a peak of 18 percent in the mid-1990s, and the construction of new plants lags far behind the pace of closures, according to the International Energy Agency.

On many fronts, nuclear power remains an almost perfect solution for a resource-poor island nation like Japan: it requires minimal overseas fuel, takes up little land—unlike solar and onshore wind—and produces carbon-free power around the clock. In fact, the government was targeting atomic energy to eventually be its main source of electricity right up until the Fukushima disaster.

Yet some 39 percent of Japanese people want all nuclear plants closed, according to a February survey. Many local, prefecture-level governments—which must sign off on reactor restart plans—have been reluctant to wave through approvals, while courts have supported requests to temporarily shut some operating reactors.

That opposition is problematic for a Japanese government that’s promised to lower emissions 26 percent by 2030 from 2013 levels under its Paris commitments, and is slated to review those targets this year and potentially make them stricter. “Japan will change its attitude toward nuclear builds somewhere on the road toward net-zero emissions,” said Frank Yu, an analyst at Wood Mackenzie.

Carbon dioxide intensity in Japan’s power sector surged in the years after the Fukushima incident as the nation turned to more polluting alternatives, according to IEA data. Today, fossil fuels such as liquefied natural gas and coal are used to generate most of Japan’s electricity.

Meeting the Paris goals alone will need Japan, the world’s fifth-largest greenhouse gas emitter, to hit an existing target for nuclear power to make up 20 percent to 22 percent of its energy mix by 2030

Meeting the Paris goals alone will need Japan, the world’s fifth-largest greenhouse gas emitter, to hit an existing target for nuclear power to make up 20 percent to 22 percent of its energy mix by 2030. The more ambitious pledge for 2050 may require atomic power to claim an even greater share.

“Utilizing a certain amount of nuclear will be necessary for Japan to become carbon neutral,” Tomoaki Kobayakawa, president of Tokyo Electric Power Co. Holdings Inc., owner of the crippled Fukushima plant, said in an interview.

How far Japan should go in building out a large nuclear sector, and how feasible that would be, is a current source of disagreement among the government’s advisory group. It will recommend new targets this year.

“No one believes the 2030 goal is attainable,” said Takeo Kikkawa, a professor at International University of Japan and a member of the panel who’s skeptical on the prospects for nuclear energy. “The industry doesn’t believe it is possible, but they won’t admit it.” Nuclear is likely to account for 15 percent of Japan’s energy, at most, in 2030, he says.

So far, utilities have applied to restart 27 reactors—25 of which are operable, while 2 are currently under construction. Toyoda says that, at the very least, those 27 units must be online if there is a chance to hit the 2030 goal.

In December, the economy ministry said nuclear energy and thermal facilities with carbon capture and storage technology may represent 30 percent to 40 percent of combined power generation in 2050, without offering specific details.

It means that Japan should already be preparing to build new reactors over the next three decades, Akio Mimura, chairman of the Japan Chamber of Commerce and Industry, told the government panel last month. Based on a 60-year lifespan, Japan will have 23 reactors in 2050 and 8 by 2060, according to a government presentation in December.

“The government must clarify its position,” Mimura told the advisory group. “If we don’t start planning this now, we won’t have enough nuclear power capacity by 2050.”