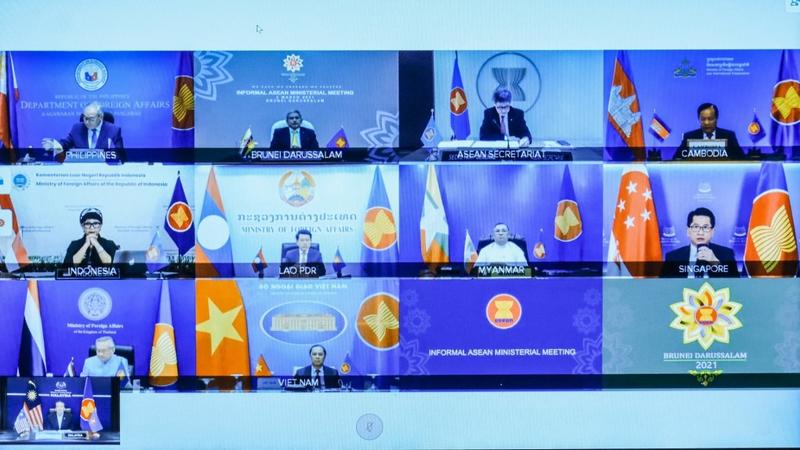 This handout photo taken and released on March 2, 2021 by H2O Images shows foreign ministers and representatives of countries in the Association of Southeast Asian Nations (ASEAN) pictured on a screen during a virtual meeting in Putrajaya, outside Kuala Lumpur. (HANDOUT / H2O IMAGES / AFP)

The Association of Southeast Asian Nations is seeking peaceful and constructive approaches to political stability in Myanmar which is facing troubles amid continuing protests against the new military administration.

In a statement issued on March 2,

ASEAN said it is ready to assist Myanmar in a positive, peaceful and constructive manner.

“We expressed our concern on the situation in Myanmar and called on all parties to refrain from instigating further violence, and for all sides to exercise utmost restraint as well as flexibility,” the regional organization said after an Informal ASEAN Ministerial Meeting.

“We also called on all parties concerned to seek a peaceful solution, through constructive dialogue and practical reconciliation in the interests of the people and their livelihood.”

The statement said the bloc has been closely following the developments in the region, and that political stability in all the member states is essential to achieving a collective peaceful, stable and prosperous ASEAN community.

“We underscored the need to maintain our unity, centrality, and relevance in the region and to collectively address common challenges,” it said.

The balanced approach to the situation in Myanmar meets the principle of noninterference and is aimed at a peaceful resolution of the country’s issues, experts said.

Yang Razali Kassim, senior fellow with the S. Rajaratnam School of International Studies at Nanyang Technological University in Singapore, said a statement from the 10-nation bloc is the latest manifestation of its policy of constructive engagement, which means a balance between noninterference and engagement.

“ASEAN’s approach in dealing with Myanmar, or any troubled fellow member-state, has always been different from that of Western countries because of their different political cultures,” Kassim said.

“While the West would take a firm interventionist stance, ASEAN’s position has always been more calculated, guided by the doctrine of noninterference.”

Chheang Vannarith, president of Asian Vision Institute, a think tank in Phnom Penh, said the ASEAN statement “reflects the collective political will to restore democracy, rule of law, and human rights in Myanmar”.

“It is a diplomatic and political message to the military leaders in Myanmar,” he said, noting that it is important to put the interests and well-being of the people at the front and center of political reconciliation and nation building.

Kassim said the statement, despite the diplomatic wording, reflects ASEAN’s growing concern over the worsening conflict in Myanmar. “In the past, such internal ASEAN discussions would be held behind closed doors.”

Kavi Chongkittavorn, senior fellow at the Institute of Security and International Studies in Bangkok’s Chulalongkorn University, said ASEAN is facing some existential challenges and that the group “has to work it out as one family”.

“It is important to build trust among all parties concerned before any useful and fruitful (progress) can start,” Kavi said.

Kavi said Thailand, which shares a 2,400-kilometer border with Myanmar, has a lot at stake in the stability of Myanmar, as it hosts more than 2 million workers from there.

Hosted by current ASEAN chair Brunei, the online informal meeting was the first gathering among ministers involving all 10 countries in the bloc. The participants included Myanmar’s new foreign minister, U Wunna Maung Lwin, who took charge after the military takeover in February.

Dozens of people have reportedly died during civilian protests that defy bans of the new administration. A report from Myanmar Now website said at least 18 people died and more were injured on March 3 in towns and cities across the country despite a state of emergency.

Meanwhile, Myanmar reported 19 more COVID-19 confirmed cases on the same day, bringing the tally in the country to 141,984, according to a release from the Ministry of Health and Sports. The death toll from the pandemic stood unchanged at 3,199 in the country, the ministry said.