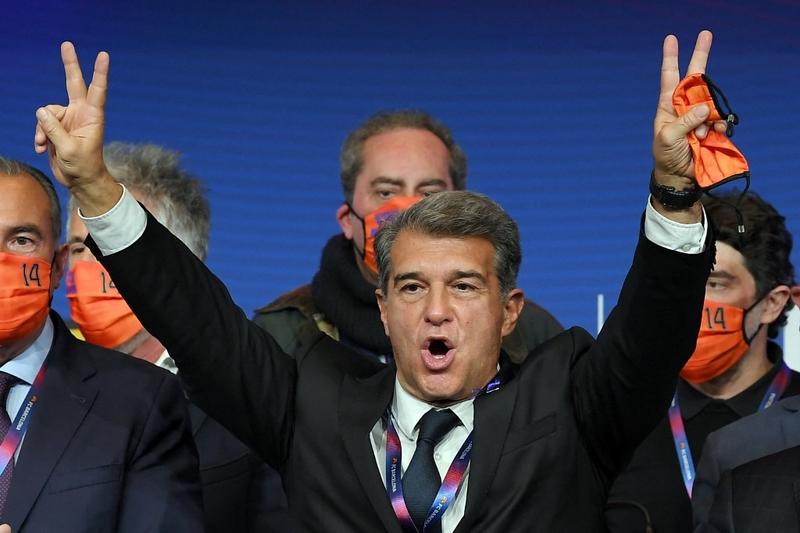 Spanish lawyer Joan Laporta celebrates his victory at the auditorium of the Camp Nou complex after winning the election for the FC Barcelona presidency on March 7, 2021 in Barcelona. (PHOTO / AFP)

MADRID - Joan Laporta was elected president of FC Barcelona for a second time after a vote of the club's membership on Sunday.

The relatively high turnout came despite the problems posed by the ongoing COVID-19 pandemic, which led to over 20,000 club members using their right to a postal vote.

58-year-old Laporta returns to the presidency he held between 2003 and 2010 in a period which saw the club overtake Real Madrid in the dominance of La Liga, thanks to the signing of Ronaldinho and the emergence of Pep Guardiola as head coach, with a team containing players such as Lionel Messi, Andres Iniesta, Xavi Hernandez, Gerard Pique and Samuel Eto'o.

Laporta's two main problems on taking over will be to try and convince Messi, whose contract is due to expire at the end of June, to sign a new deal that the club can afford.

His second problem will be how to resolve a debt of around 1,170 million euros, which will severely limit Barca's ability to operate effectively in the transfer market to replace aging players such as Sergio Busquets, Gerard Pique and Jordi Alba, although the progression of youngsters such as Illax Moriba, Pedri, Ansu Fati, Oscar Mingueza and Riqui Puig could give the club the basis of a competitive squad for the future.