Vice-Premier Han says HK must be administered by patriots 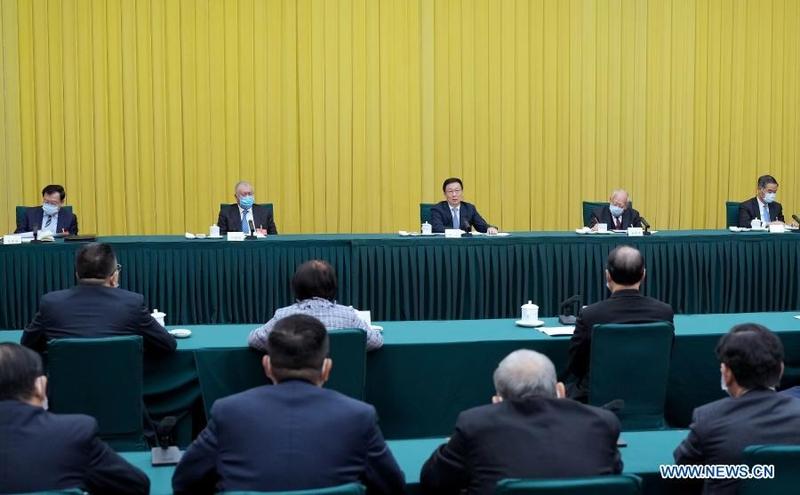 Vice-Premier Han Zheng (center), also a member of the Standing Committee of the Political Bureau of the Communist Party of China Central Committee, visits national political advisers from Hong Kong and Macao special administrative regions and joins a group discussion with them at the fourth session of the 13th National Committee of the Chinese People's Political Consultative Conference in Beijing on March 6, 2021. (XINHUA / LIU BIN)

Vice-Premier Han Zheng called for the principle of "patriots administering Hong Kong" to be implemented as he joined a panel discussion with members from the Hong Kong and Macao delegation to the fourth session of the 13th National Committee of the Chinese People's Political Consultative Conference in Beijing on Saturday.

The meeting came a day after lawmakers began deliberating a draft decision on improving the electoral system of the Hong Kong Special Administrative Region during the fourth session of the 13th National People's Congress.

Han urged the CPPCC members to uphold the full implementation of the fundamental principles of "one country, two systems," and "the people of Hong Kong administering Hong Kong with a high degree of autonomy."

The vice-premier also called for improvements in Hong Kong's electoral system under the framework of the Constitution and the Basic Law so as to safeguard the constitutional order of the HKSAR.

He acknowledged the work done by the Hong Kong and Macao members and encouraged them to step up efforts to contribute more.