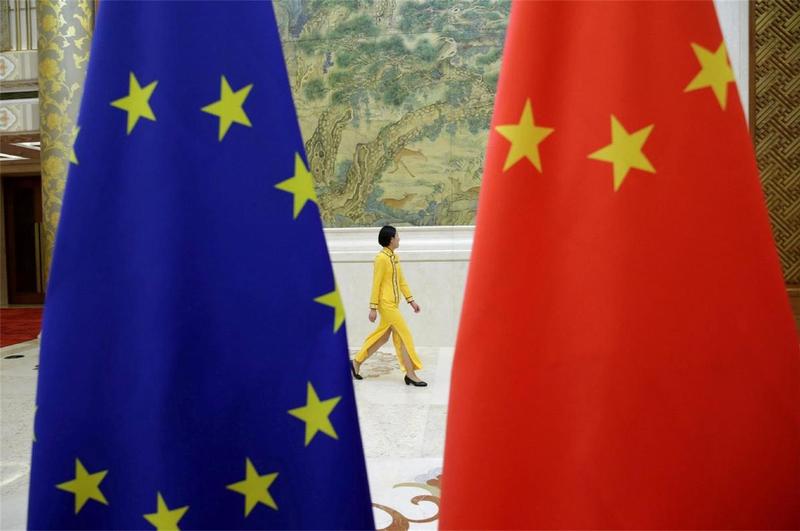 An attendant walks past EU and China flags ahead of the EU-China High-level Economic Dialogue at Diaoyutai State Guesthouse in Beijing, on June 25, 2018. (PHOTO / AGENCIES VIA CHINADAILY.COM.CN)

To Shada Islam, a longtime observer of European Union-Asia affairs, EU-China relations have demonstrated strong resilience in the past year despite challenges and geopolitical headwinds.

As head of the Brussels-based global strategic and advisory firm New Horizons Project, Islam noticed that high-level contacts between the two sides have "intensified and become even more frequent than ever".

While EU leaders feel relieved that Joe Biden is now in the White House, Islam said that the EU has also learned harsh lessons about over-reliance on the US

She was referring to the three video conferences with EU leaders attended by Chinese President Xi Jinping in 2020. In addition, there were many meetings between other senior officials and ministers, and a trip to five European nations by State Councilor and Foreign Minister Wang Yi in late August.

She described the exchanges as "signaling China's continuing interest in the EU as a strategic partner".

Islam praised China and the EU for launching their new high-level dialogues on the environment, climate and the digital sector, subjects that will also be high on the agenda of the annual sessions of the National People's Congress and the Chinese People's Political Consultative Conference National Committee.

"In the future, I see intensified discussions on climate change and digital networks as well as connectivity, including in Africa, and efforts to reinforce fragilized multilateral cooperation," she told China Daily ahead of the two sessions.

She added that it's important for the two sides to talk and discuss difficult issues and areas where they disagree to make the relationship work better.

Islam, a noted commentator in Brussels, said the EU-China Comprehensive Agreement on Investment, which concluded on Dec 30, "marks a constructive geostrategic moment" and shows their economic interdependence.

"The deal sends a strong message to the world that countries can compete in some areas but can also act together, both for their own interests and for the broader global interest," she said.

She believes that the EU hopes the agreement, once ratified, will help spur further opening-up of the Chinese economy in much the same way that China's WTO membership did in 2001.

Islam said the EU is becoming a more confident and self-assured global actor in concluding the deal despite criticism, and the investment deal, along with several others the EU has concluded in the region, means that the EU has become "part and parcel of a vibrant, dynamic and expanding Asia-Pacific economic area".

She stressed that both the EU and China grappled in the past year with the COVID-19 pandemic and its impact on their health structure and economy.

"Despite difficult geopolitical headwinds, the EU-China relationship showed its resilience in difficult times," she said.

While EU leaders feel relieved that Joe Biden is now in the White House, Islam said that the EU has also learned harsh lessons about over-reliance on the US.

With German Chancellor Angela Merkel and French President Emmanuel Macron in the driver's seat, the EU is pushing ahead with plans for open strategic autonomy, according to Islam.

She said it was the EU "no longer walking in America's shadow and being able to act independently from Washington and about putting European interests first".

She believes that the four years of the Trump administration have damaged European trust in the US, its leadership and its priorities, and there is this abiding concern in Europe that Trump's legacy will live on.

"Europeans are more aware than many in America of the fact that the world has changed and that demand for 'US leadership' is not strong," she said.

"The world is in transition. And like many other countries, Europeans don't like being offered a binary choice between the US and China," she said.