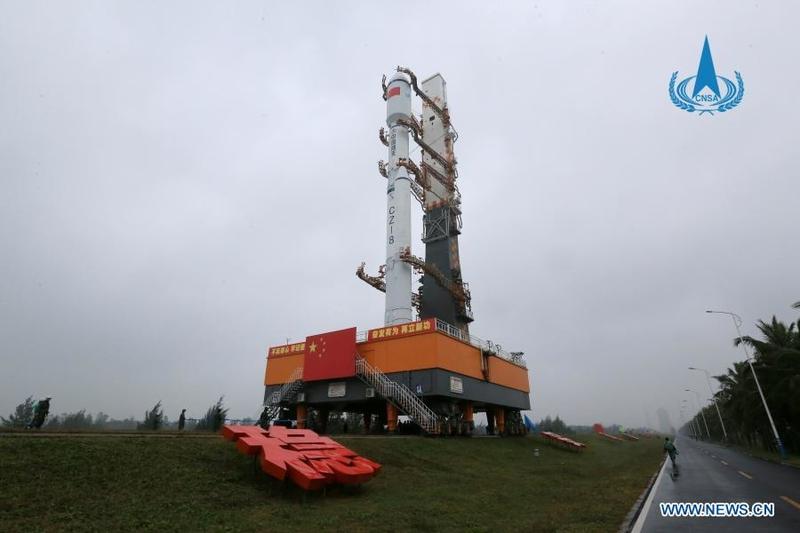 Jiang Jie, an expert at the academy and a member of the Chinese Academy of Sciences, said on Wednesday that research and development of the reusable variant of the Long March 8 rocket was proceeding well and designers plan to conduct the first test to verify key vertical landing technologies before the end of this year.

Instead of breaking up and falling back to Earth like the first stages of all previous Chinese rockets, the new core and side boosters will stay together and make a powered landing on a preset landing site or a recovery platform at sea

"The new model will feature highly integrated equipment, autonomous technologies and convenient pre-launch preparations," said Jiang, a member of China's top political advisory body, one day ahead of the opening of the fourth session of the 13th National Committee of the Chinese People's Political Consultative Conference.

Designers are developing an integrated first stage for the reusable variant, she said. This new first stage will consist of a core booster and two side boosters. Instead of breaking up and falling back to Earth like the first stages of all previous Chinese rockets, the new core and side boosters will stay together and make a powered landing on a preset landing site or a recovery platform at sea.

The expert noted that designers are focusing on several crucial subsystems such as low-speed landing navigation and guidance apparatus and a foldable landing buffer.

The Long March 8, the latest addition to China's Long March launch vehicle fleet, flew its first mission in December from a coastal launchpad at the Wenchang Space Launch Center in Hainan province.

The 50.3-meter rocket reached a sun-synchronous orbit at an altitude of 512 kilometers and then deployed the New Technology Demonstrator 7 experimental satellite and four small private satellites.

Designed and built by the China Academy of Launch Vehicle Technology, a subsidiary of China Aerospace Science and Technology Corp, the Long March 8 has two core stages and two side boosters. It has six engines propelled by liquid oxygen, liquid hydrogen and kerosene.

With a liftoff weight of 356 metric tons, it is capable of sending payloads weighing 4.5 tons to a sun-synchronous orbit 700 km above the Earth or satellites

with a combined weight of 2.8 tons to a geostationary transfer orbit, according to the academy.

The Long March 8 is capable of transporting various types of spacecraft to multiple types of orbit, but its main task is to place satellites in sun-synchronous orbit to meet the surging demand for launch services from commercial satellite companies at home and abroad, said Song Zhengyu, chief designer of the Long March 8.

The best-known reusable rocket is SpaceX's Falcon Heavy, which had its maiden launch in February 2018. All of the boosters on the US rocket's first stage can be recovered and reused as they separate from each other and perform controlled reentry and landing.