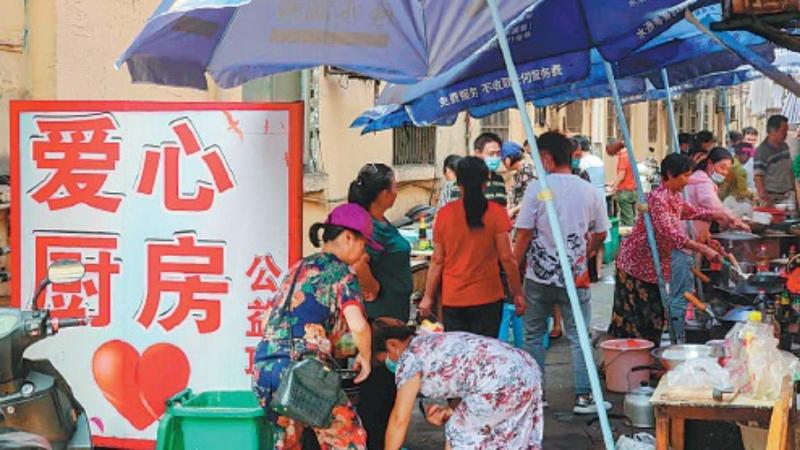 People use free kitchen services provided by Wan Zuocheng and Xiong Gengxiang to cook meals in an alleyway next to the Jiangxi Cancer Hospital in Nanchang, Jiangxi province, in Aug. (PHOTO / CHINA DAILY)

An elderly couple who have been providing free kitchen services to families of cancer patients for nearly 20 years have been honored as "People Who Moved China in 2020" for their kindheartedness.

Wan Zuocheng and his wife, Xiong Gengxiang, opened a restaurant near a cancer hospital in Nanchang, capital of Jiangxi province, in 1993. They set up a breakfast stall in the alleyway after the restaurant was demolished some years later in a road renovation program.

In 2003, a woman whose child was receiving treatment for bone cancer in the nearby Jiangxi Cancer Hospital went to their stall, asking to borrow their stove to cook food. She said the child wanted to eat food cooked by her.

Feeling sympathetic, Wan did not hesitate to agree to her request.

Since then, more and more families of patients began coming to their stall to cook.

The couple has been allowing people to use their cooking utensils and condiments free of charge. To meet the growing demand, they have even added more stoves and cooking utensils to their stall.

Their generosity was costly－spending on water, electricity and coal multiplied over the years. With costs rising, those who borrowed their stoves started paying the couple. However, Wan and Xiong have only been accepting 1 yuan (15 cents) per dish, which is barely enough to cover the costs.

Every day, Wan gets up before 5 am, and ignites the stoves and boils hot water, getting everything ready for people who come to the "cancer kitchen". At noon, when the last kitchen user leaves, the couple cleans up.

Their son once tried to persuade them to stop helping the families, worrying that doing so was exhausting them and would affect their health. But they insisted that "helping the patients made them happy".

Wan and Xiong know well the hardships of families with cancer patients. The prolonged treatments exhaust their energy, strength and money bit by bit over time.

"Many of those coming here are cancer patients and their families who are going through tough times," Wan said.

The annual TV program People Who Moved China, launched by China Central Television in 2003, selects the country's 10 most inspiring individuals or groups every year

Wan and Xiong said they hope the food cooked in the "cancer kitchen" can provide some comfort to those suffering physically and help relieve some financial burden on their families.

Fang Zhihong, whose wife is receiving treatment for liver and lymphoma cancers, said, "We can save some money by cooking here, and the nutrition is better."

Many of them become friends with the couple. Some come to say goodbye when they leave.

A man in his 50s once spent three years in the cancer hospital, and he talked with Wan in the "cancer kitchen" every day. Later, when the man's condition became terminal, he was told to go back home.

Before leaving, he insisted on seeing Wan. The two hugged each other and cried.

Having witnessed numerous deaths over the years, the couple have learned the meaning of life.

"We and the patients are inseparable now. For us, without the patients, we would feel lonely, and for the patients, they would encounter difficulties without us," Wan said. "I will help them as long as I am able to do."

In 2019, the local government funded the renovation of the "cancer kitchen", moving it indoors and equipping it with more than 20 cooking positions and ventilators.

Wan and Xiong missed the award ceremony for the "People Who Moved China in 2020" on Feb 17 because they wanted to keep providing kitchen services to the patients during this year's Spring Festival holiday.

The annual TV program People Who Moved China, launched by China Central Television in 2003, selects the country's 10 most inspiring individuals or groups every year.