NZ's Auckland back to lockdown after case with unknown source 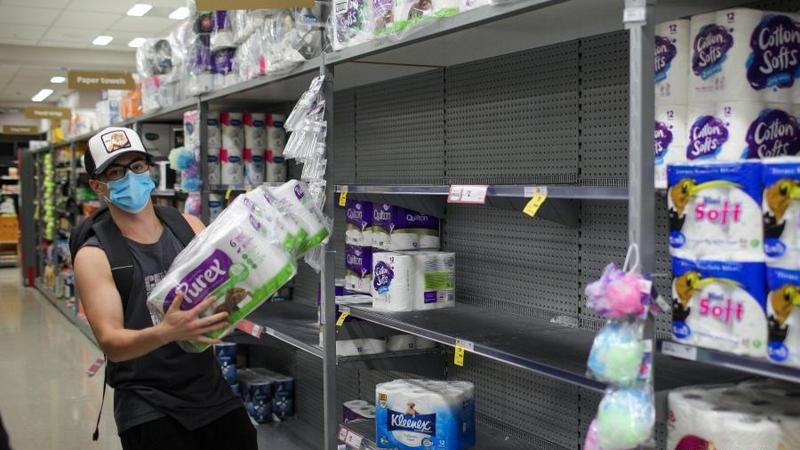 A man wearing a face mask shops for toilet rolls at a supermarket in Auckland, New Zealand, Feb 14, 2021, as the city went into a snap lockdown. (ZHAO GANG / XINHUA)

ANKARA / DUBAI / JERUSALEM - New Zealand’s Prime Minister Jacinda Ardern said on Saturday that the country’s biggest city, Auckland, will be put into a seven-day lockdown from Sunday after a coronavirus community case of unknown origin was recorded.

The rest of New Zealand will be put into Level 2 restrictions that limit public gatherings, among others, she told a news conference.

In mid-February, Auckland’s nearly 2 million residents were plunged into a snap three-day lockdown after a family of three were diagnosed with the more transmissible UK variant of COVID-19.

The three states, home to nearly two-thirds of Australia’s 25 million people, recorded no community transmissions on Saturday of the new coronavirus that causes COVID-19. For New South Wales, the most populous state, it was 41st straight day without a local case.

The state, in addition to allowing up to 30 people to dance at weddings, eased further restrictions on the number of visitors at home. South Australia state allowed some club dancing from Friday.

People in Victoria, which this month imposed a five-day strict lockdown after a small outbreak of the coronavirus, woke up on Saturday to rules allowing stadiums to seat 50 percent of capacity for sporting events.

The new cases were found in capital Phnom Penh and southwestern Preah Sihanouk province, MoH's secretary of state and spokeswoman Or Vandine said in the statement, adding that they were all related to the third community outbreak on Feb. 20.

The patients are currently receiving treatment at various designated COVID-19 hospitals, she said.

India on Friday extended the deadline of the existing guidelines for surveillance, containment of COVID-19 and caution regarding the pandemic to remain in force up to March 31.

The federal Home (internal affairs) Ministry issued an order saying that while there has been a substantial decline in the active and new COVID-19 cases, "there is a need to maintain surveillance, containment and caution so as to fully overcome the pandemic".

The states have also been advised to speed up the vaccination of the target population so as to break the chain of transmission and overcome the pandemic.

According to the official data, the death toll mounted to 156,938 as 113 COVID-19 patients died since Friday morning.

There are still 159,590 active cases in the country, while 10,763,451 people have been discharged so far from hospitals after medical treatment.

There was a decrease of 3,604 active cases during the previous 24 hours. The number of active cases in India had seen a rise over the past few days. 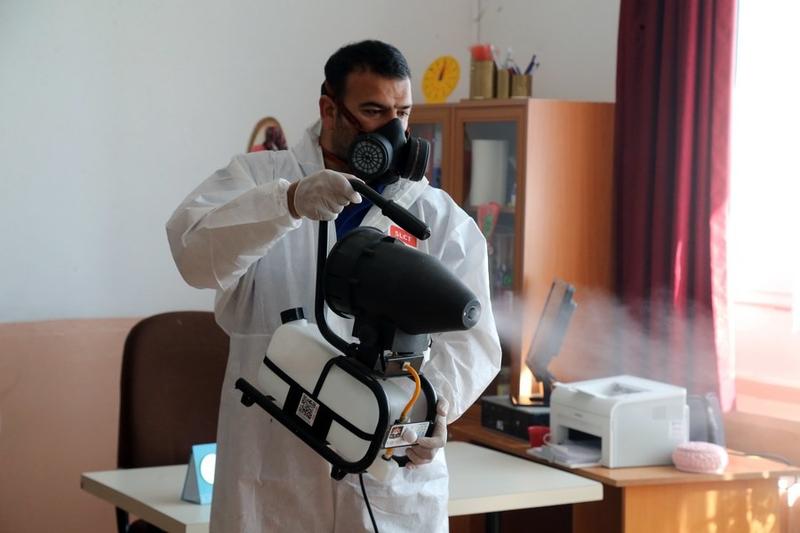 The Iranian health minister said on Friday that Iran will turn into a major COVID-19 vaccine producer by spring, starting with vaccinating the vulnerable groups.

"With the continual efforts of the Iranian youth, we will become one of the largest (COVID-19) vaccine hubs in the world in the next spring," said Iranian Health Minister Saeed Namaki.

"We will hopefully be able to control the situation by utmost observance of health guidelines," he added.

The pandemic has so far claimed 59,899 lives in Iran, up by 69 in the past 24 hours, said Sima Sadat Lari, spokeswoman for Iranian Ministry of Health and Medical Education, during her daily briefing.

Haider Majeed, spokesman of the General Secretariat for the Council of Ministers, told the official Iraqi News Agency that the Ministry of Health assigned 52 hospitals and 506 health centers across the country to vaccinate the citizens.

The Iraqi health authorities expect to receive the first batch of coronavirus vaccines in a few days, as the Iraqi National Board for Selection of Drugs has approved the emergency use of China's Sinopharm and Britain's AstraZeneca vaccines to contain the spread of COVID-19 in the country.

The death toll from the COVID-19 in Israel reached 5,694 after nine new fatalities were added, while the number of patients in serious condition decreased from 751 to 738.

Kuwait reported on Friday 1,022 new COVID-19 cases, bringing the total confirmed number in the country to 189,046.

The Kuwaiti Health Ministry also announced five more deaths, taking the death toll to 1,072. The tally of recoveries in Kuwait rose by 1,114 to 177,133, while 10,841 coronavirus-related patients were receiving treatment.

Mongolia reported 35 new COVID-19 cases in the past 24 hours, bringing its national tally to 2,866, said the country's National Center for Communicable Diseases on Saturday.

"A total of 15,155 polymerase chain reaction tests for COVID-19 were conducted across Mongolia yesterday and 35 of them were positive," said Amarjargal Ambaselmaa, head of the center's surveillance department, at a press conference.

The latest cases were locally transmitted and detected in the country's capital Ulan Bator, said Ambaselmaa.

Meanwhile, 33 more COVID-19 patients have recovered from the disease, bringing the total recoveries to 2,183, she added.

Myanmar's Foreign Affairs Ministry on Friday announced the extension of temporary entry restrictions for all travellers until March 31 to continue curbing the spread of the virus.

The extension will also be applied to temporary suspension of all types of visas including social visit visas and visa exemption services, the ministry's announcement said.

The Central Committee on Prevention, Control and Treatment for COVID-19 also issued an announcement of extending the period of preventive measures against the COVID-19 until March 31.

In Palestine, 660 new cases and 10 deaths were reported on Tuesday, raising the total number of infections in the West Bank, the Gaza Strip and East Jerusalem to 176,076 and the death toll to 1,977.

As the first among the Gulf countries to report COVID-19 cases, the United Arab Emirates (UAE) on Friday confirmed 3,498 new COVID-19 cases, bringing the total cases in the country to 385,160.

Meanwhile, 480 more recovered from the virus, bringing the overall recoveries to 152,807, while the death toll remained at 257 for the fifth day running, according to a ministry statement quoted by QNA.

Singapore's Ministry of Health (MOH) reported 13 new COVID-19 cases on Friday, bringing the total number of confirmed cases in the country to 59,913.

South Korea said 18,489 people received their first doses of AstraZeneca PLC’s vaccine by midnight on Friday as it launched an ambitious COVID-19 inoculation campaign, and will begin using Pfizer/BioNTech vaccines on Saturday.

The first to receive the shots are healthcare workers, staffers at assisted care facilities and other high-risk people, with a goal of vaccinating 32 million to 36 million people - some 60 percent to 70 percent of the population - by September.

The government hopes to reach herd immunity, defined as at least a 70 percent vaccine take-up, by November, as health authorities remain on alert for signs of sporadic infections.

The first AstraZeneca vaccines are to be administered to 289,000 people, while about 55,000 healthcare workers in coronavirus treatment facilities will receive first batch of the vaccine developed by Pfizer Inc and BioNTech SE supplied through the COVAX global vaccine-sharing programme.

Thailand on Saturday confirmed 72 more cases of COVID-19, mostly domestic, according to a report of the Center for the COVID-19 Situation Administration (CCSA).

Of Saturday's new cases, 63 were domestic infections while nine others referred to imported cases, the CCSA report said.

Those domestic cases included 37 in Samut Sakhon, 14 in Pathum Thani and five in Bangkok, among other provinces, the report said.

Philippine President Rodrigo Duterte has extended partial coronavirus curbs in the capital until the end of March, as the country awaits the arrival of vaccines, the presidential spokesman said on Saturday.

With southeast Asia’s second-highest tally of infections and deaths, the Philippines has suffered lengthy, strict lockdowns in Manila and provinces, hitting an economy that was among Asia’s fastest growing before the pandemic.

Curbs will stay for another month in Manila, which accounts for 40 percent of national economic output, the spokesman, Harry Roque, said in a statement. Also under partial curbs are Duterte’s southern home city of Davao, and the northern city of Baguio.

The decision follows a report of 2,651 new virus infections, the highest daily increase in more than four months.

The Philippines will get its first shipment of COVID-19 vaccines on Sunday, allowing the nation to kickstart an inoculation effort weeks after some of its neighbors started theirs.

The 600,000 doses will come from Sinovac Biotech Ltd., presidential spokesman Harry Roque said in a statement on Friday, adding that the government is confident “many” health care workers would use the vaccine from the Chinese company.

The local Food and Drug Administration has said it’s against the use of Sinovac vaccine for health care workers, citing its low efficacy to those frequently exposed to the virus. Still, the health department said Friday that a panel of its own experts declared the vaccine beneficial and added it would leave health workers to decide if they want to take the shots.

In Turkey, local authorities in the northwestern province of Sakarya banned all activities of sports facilities for 15 days starting March 1, the CNN Turk broadcaster reported.

In Bodrum, one of the most popular international tourist destinations in the southwestern Turkish province of Mugla, picnic activities were forbidden in beaches, parks, and other recreation areas.

The Black Sea provinces of Rize and Tokat as well as a district in the northwestern province of Edirne also imposed similar restrictions to contain the spread of the coronavirus.

The death toll from the virus in Turkey, arguably the hardest hit country in the Middle East, rose by 74 to 28,432, while the total number of recoveries climbed to 2,556,785 after 10,282 more recovered in the last 24 hours, according to the country's health ministry.

The rate of pneumonia in COVID-19 patients in Turkey stands at 4.2 percent and the number of seriously ill patients is 1,195, said the ministry.

Turkey started mass COVID-19 vaccination on Jan. 14 after the authorities approved the emergency use of China's CoronaVac vaccine.

The Yemeni Health Ministry announced on Friday that it had approved the emergency use of the British AstraZeneca COVID-19 vaccine in the country's war-torn provinces, saying "the first round of vaccination campaign is expected to be launched within a month."