US Republicans grappling with legacy of ex-leader 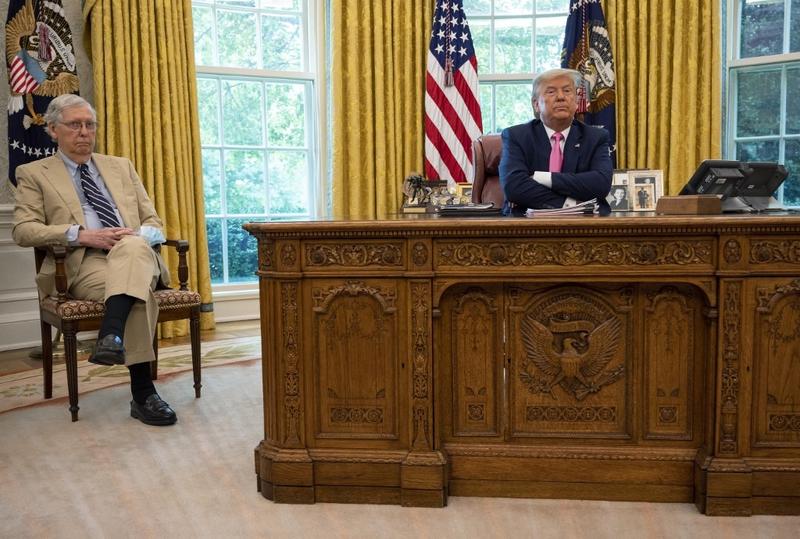 This July 20, 2020 photo shows then US President Donald Trump (right) and then Senate Majority Leader Mitch McConnell during a meeting in the Oval Office at the White House in Washington, DC. ( JIM WATSON / AFP)

Republicans fight Democrats while Democrats battle each other.

That's the way it has been in US politics for decades, but now the party of Abraham Lincoln is the party of Donald Trump, and infighting among Republicans is showing widening fissures in the party. And some are violating Ronald Reagan's so-called Eleventh Commandment: "Thou shalt not speak ill of any fellow Republican."

Chief among them are two "formers": the former president and the former Senate majority leader Mitch McConnell.

"Mitch is a dour, sullen, and unsmiling political hack," said Trump after McConnell voted to acquit him at his second impeachment trial on Feb 6 but then blamed Trump for the Jan 6 riot at the US Capitol.

"There's no question, none, that president Trump is practically and morally responsible for provoking the events of the day. No question about it," said McConnell in a speech on the floor of the Senate, where he is now the GOP minority leader.

In a Feb 15 op-ed article in The Wall Street Journal, McConnell wrote: "His supporters stormed the Capitol because of the unhinged falsehoods he shouted into the world's largest megaphone. His behavior during and after the chaos was also unconscionable."

Now, state GOP parties - along with Trump - are retaliating against the 10 Republicans in the House who voted to impeach the ex-president and the seven in the Senate who voted to convict him of inciting the attack on the Capitol.

They are using votes of censure or vows of putting up alternative candidates in primaries against them. State party leaders have defended the punitive moves, which display a groundswell of outrage from grassroots conservatives.

"Censures from the state parties are just a reflection of where the party is at," one former Trump adviser who wasn't named told The Hill website. "When these senators voted against Trump, they knew exactly what the fallout would be."

The vote by Senator Bill Cassidy to convict Trump was one of the biggest surprises of the impeachment trial. Cassidy won reelection in November 2020 by running close to Trump. Hours after his vote to convict, the executive committee of the state GOP voted unanimously to censure him.

Senator Lisa Murkowski is the only GOP senator facing reelection in 2022 who voted to convict Trump. Her allies say a primary challenge for her is all but assured.

Back to political spotlight

Trump will seek to return to the political spotlight in an address to a major meeting of conservatives, a source familiar with his plans said on Saturday. Trump plans to speak to the Conservative Political Action Conference in Orlando, Florida, on Feb 28, the source told Reuters on condition of anonymity.

"He'll be talking about the future of the Republican Party and the conservative movement," the source said.

Many of the 10 Republican House members who voted to impeach Trump last month have been rebuked by local party organizations. Michigan Representative Peter Meijer has been called a "traitor". State parties have censured representatives Liz Cheney and Tom Rice.

As for Trump, he has floated the possibility of a 2024 bid for the White House and after he avoided conviction in his second impeachment trial, he declared the "movement to Make America Great Again has only just begun".