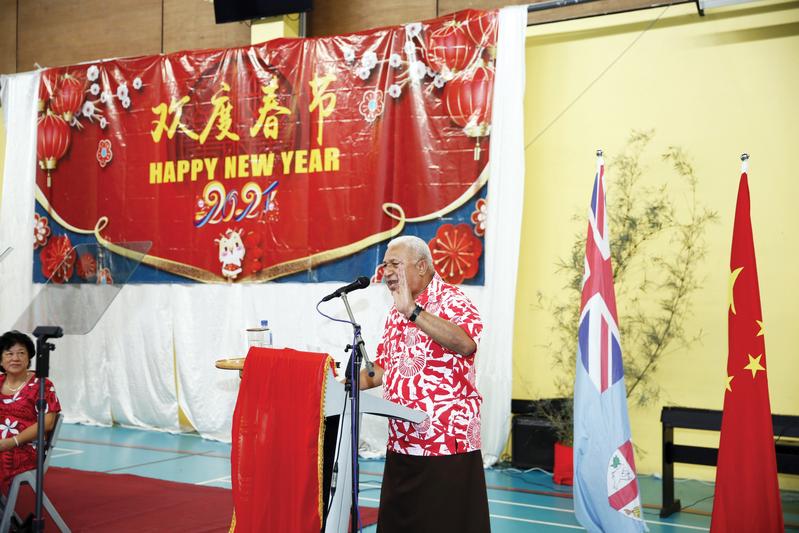 Fiji Prime Minister Josaia Voreqe Bainimarama officiates at a celebration of the Chinese New Year of the Ox at the Yat Sen School Hall in Suva, the capital, on Feb 14. (ZHANG YONGXING / XINHUA)

United Nations Secretary-General Antonio Guterres delivered a happy surprise to Chinese people around the world just before the arrival of Chinese New Year.

Guterres was just one of several leaders from international organizations and various countries who delivered festival greetings as China welcomed the Spring Festival on Feb 12.

Quite a few them spoke in Mandarin to the delight of many.

“I send my best wishes to everyone celebrating the Lunar New Year,” said Guterres, who was born in the Year of the Ox. “The ox symbolizes energy, strength, and courage. These qualities are what the world needs now.”

The COVID-19 pandemic brought great uncertainty and disruption, he noted, stressing that “in 2021, we must stand together to fight the virus, take climate action and build a strong recovery from the pandemic”.

Also greeting “Chun jie kuai le!” was Pakistan President Arif Alvi. He said the best a person can wish another — especially their friends in China — is prosperity, happiness, joy, health, safety, and having a good life. He then added “niu nian da ji” (Good luck in the Year of Ox).

President Xi Jinping took a phone call from his United States counterpart Joe Biden on the eve of the Lunar New Year. The two presidents wished each other good fortune in the Year of the Ox. Biden conveyed festive greetings to the Chinese people and wished them a happy and prosperous New Year.

Sri Lanka Prime Minister Mahinda Rajapaksa extended best wishes to President Xi, Premier Li Keqiang, and the people of China for the Chinese New Year. “The long-standing friendship and cooperation between Sri Lanka and China continue to grow stronger in these challenging times as we join efforts to fight the coronavirus pandemic,” he said.

Serbian President Aleksandar Vucic delivered his very special message to Chinese people: “We appreciate you, we respect you; we are profoundly grateful to you for everything you did and for our friendship and we will do our best to keep this friendship. You can count on Serbian people.”

Giving her new-year greetings, Bulgarian Deputy Prime Minister Mariyana Nikolova praised China and its people. “The solidarity and resilience of the Chinese people and nation teach us that global challenges can only be overcome, only by joint efforts, unity and cooperation,” she said.

In his greetings, Zimbabwean President Emmerson Mnangagwa said on Feb 11: “A happy new year to the government and the people of China. May this year bring health, happiness, prosperity and success to our friends in China, to the people of Zimbabwe and to humanity as a whole.”

“Ethiopia will continue to build on its existing bilateral relations and cooperation with China in the Year of the Ox,” Ahmed said in his message to the Chinese people and government via Twitter.

Liberian President George Weah extended Spring Festival wishes to the Chinese people on Feb 17, hoping for closer ties between the two countries in the coming year.

Maltese President George Vella on Feb 12 welcomed the Chinese New Year of the Ox and said he expects both countries to enhance bilateral cooperation in the New Year.

“Happy New Year to all the people of the People’s Republic of China and in particular to the community living in Argentina. May the Year of the Ox bring prosperity to all,” Sola tweeted.

Around the world, Spring Festival celebrations such as traditional Chinese lion dances, festive Chinese foods and lantern shows have become an opportunity to boost local cultural diversity, tourism and business.

The Chinese Embassy in Malaysia hosted a number of colorful activities during the Lunar New Year and also distributed Spring Festival packages for Chinese international students in Malaysia. On Feb 14, the 2021 Malaysian “Happy Spring Festival” performance was premiered on the social media accounts of the embassy, adding a cultural feast to local audiences.

In New Zealand, thousands of people crowded the streets and waterfronts in Wellington on the afternoon of Feb 14 to watch the annual Chinese New Year parade, with Wellington Mayor Andy Foster leading the way.

The capital streets were filled with joy and gaiety. Dragon and lion dancers put on performances as a wish for people’s health and good fortune in the coming year.

In South Australia’s Adelaide, musicians from a local art school joined others in a concert for Spring Festival.

In Japan, traditional Chinese and Japanese arts were displayed on the same stage. In Russia, students from primary and secondary schools, as well as kindergartens, in St. Petersburg put on a series of shows which included the singing of Chinese songs and performing martial arts in an online celebration.

To ring in the Year of the Ox, the Scottish capital of Edinburgh organized a long list of outdoor and online events, including an online concert and shopping opportunities. Edinburgh Castle, one of the most iconic tourist attractions in Scotland, was illuminated in the color of “Chinese Red” to observe the special occasion.