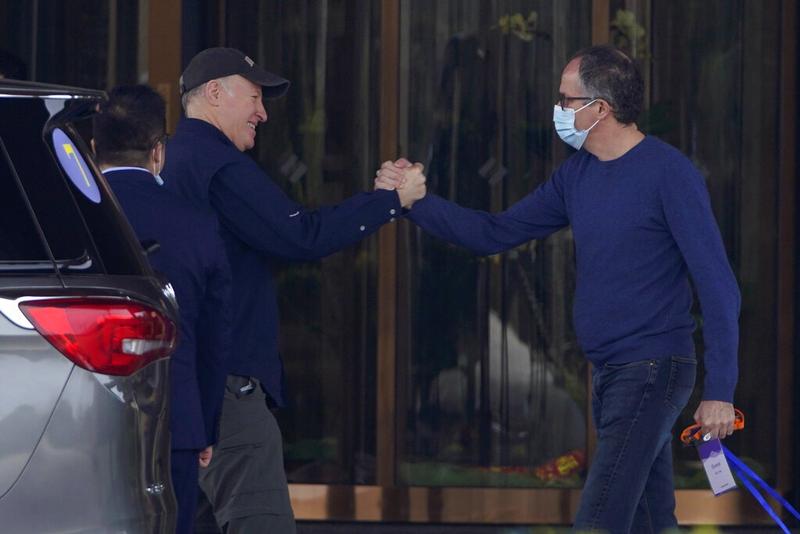 Peter Daszak (left) and Peter Ben Embarek of a World Health Organization team say farewell outside their hotel at the end of their WHO mission to investigate the origins of the coronavirus pandemic in Wuhan in central China's Hubei province, Feb 10, 2021. (NG HAN GUAN / AP)

‘Shame on you @nytimes!”

This rare burst of indignation from British zoologist Peter Daszak on Twitter came in response to misinformation by The New York Times in covering the independent research of a team of international experts who had been seeking to trace the origin of the COVID-19 virus.

The zoologist and some other scientists in the team, which traveled to China recently on a field trip, said the US newspaper on Feb 12 “selectively misquoted” them and “twisted” their remarks, so as to “fit a narrative that was prescribed before the work began”.

Quite in tune with US politicians’ criticism of the World Health Organization and China, the report accused Chinese scientists of refusing to share important data about the early days of the pandemic, citing independent investigators for WHO. A similar report was also found in the London-based newspaper The Times.

“This was NOT my experience on@WHO mission. As lead of animal/environment working group I found trust & openness w/my China counterparts. We DID get access to critical new data throughout. We DID increase our understanding of likely spillover pathways,” Daszak wrote on Twitter after he was quoted by NYT.

Thea K. Fischer, a Danish epidemiologist on the team, also immediately rebutted the report, which she said “intendedly twisted” the interviewees’ remarks and cast “shadows over important scientific work”.

“This was NOT my experience either on the Epi-side. We DID build up a good relationship in the Chinese/Int Epi-team! Allowing for heated arguments reflects a deep level of engagement in the room,” she wrote on Twitter.

Daszak, also president of EcoHealth Alliance — a global nonprofit involved in research on the links between human, animal and environmental health — in New York, tweeted in a reply note: “Hear! Hear! It’s disappointing to spend time w/journalists explaining key findings of our exhausting monthlong work in China, to see our colleagues selectively misquoted to fit a narrative that was prescribed before the work began. Shame on you @nytimes!”

A Feb 16 article by Xinhua urged NYT to “stop distorting facts to suit own anti-China agenda”.

About a century ago, Walter Lippmann, known by many as the “Father of Modern Journalism”, criticized The New York Times for distorting reports on Russia and “seeing not what was, but what men wished to see”.

While the Times’ tradition to push a narrative instead of presenting the facts has long predated its highly biased reporting on China’s fight against COVID-19, its latest step to twist facts to suit its anti-China agenda represents a new low for the daily, said the Xinhua article.

The international team that finished its weeks of field study in Wuhan on Feb 9 was comprised of 17 experts from Australia, Denmark, Germany, Japan, the Netherlands, Qatar, Russia, Britain, the United States and Vietnam. The team also included experts from the Food and Agriculture Organization of the United Nations and the World Organization for Animal Health.

Other health experts also voiced their opinion on the incident, calling for mutual trust and respect for international cooperation on COVID-19 research.

“Collaboration is all about mutual trust and respect. If you don’t have that, no one is going to share data with you. As EID scientists, we urgently need to jettison the political crap. Hopefully there is enough enduring personal goodwill for us to effectively proceed ...” tweeted Hume Field, a science and policy adviser of EcoHealth Alliance in New York.

“As lead of animal environment working group, I found trust & openness w/ my China counterparts,” Daszak wrote on Twitter on the weekend in response to what he believed was a selectively misquoted report by NYT. The NYT issued no apology to the scientists but published a condensed transcription of an interview with Daszak on Feb 13.

In the interview recount, instead of the NYT’s claim that “On W.H.O. Trip, China Refused to Hand Over Important Data,” Daszak called what the Chinese counterparts did “extremely useful”. Daszak reaffirmed Chinese scientists’ efforts to find out what was going on since a Wuhan food market reported novel coronavirus cases and closed on Dec 31, 2019.

“It was a very extensive study, swabbing every surface of this place,” he said, while in the meantime regretting that few reports have revealed what the Chinese group had done.

“There was not really much information publicly about what had been done … They’d actually done over 900 swabs in the end, a huge amount of work,” according to the interview transcription.

Daszak again refuted the lab conspiracy theory regarding the origin of the COVID-19 virus. Both the team and their Chinese counterparts largely agreed on the hypotheses of the “pathway (of) wildlife, through a domesticated wildlife link, into Wuhan”, he said.

Earlier, Daszak also tweeted: “Please don’t rely too much on US intel: increasingly disengaged under Trump & frankly wrong on many aspects.”

Peter Ben Embarek, head of the independent team of medical professionals from a wide range of sectors, said at a virtual news conference from Geneva on Feb 12 that the Wuhan trip was “successful in many ways”. The Danish food scientist said the team has gained a better understanding of the start of the event, about what happened in December of 2019, and where it is believed to have originated.

“We have also much better understanding that there was no widespread, no large clusters of the disease in Wuhan, or in elsewhere around Wuhan, in the months prior to December 2019,” he said, calling the trip a good start.

He explained it was not possible to go there in February 2020, during Wuhan’s lockdown, which lasted two-and-a-half months. In the summer, planning started on assembling international experts and Chinese experts, as well as making working plans.

He praised the thousands of Chinese researchers working on the subject over the past year.

Experts will still continue to look for answers on this point as “there’s not a clear candidate for intermediates or hosts yet,” said virologist Marion Koopmans, a member of the team, at a news conference.

The international team presented their initial findings at a news conference on Feb 9 in Wuhan, discounting the hypothesis that the virus escaped from a laboratory in the city.

The team’s month-long field study in Wuhan concluded that it is “extremely unlikely” the novel coronavirus spread to humans through a laboratory leak, among other findings. The 17-member international team also said future studies into the origin of the virus will head “wherever indicated” and not be “geographically bound”.

At a news briefing on Feb 15, the WHO affirmed that the international expert team on the COVID-19 origin-tracing mission in Wuhan was “independent” and had no affiliation.

“So many times I hear that this is a WHO study or investigation. It’s not,” WHO Director-General Tedros Adhanom Ghebreyesus told a virtual news conference from Geneva, stressing that it was an independent study composed of independent individuals from 10 institutions.

On Feb 12, he told reporters: “We have always said that this mission would not find all the answers, but it has added important information that takes us closer to understanding the origins of the virus.”

Ben Embarek at the same occasion said, “The international teams and the Chinese counterparts have already agreed on the summary reports.”

He said that longer studies would be needed to “explore some of the hypotheses and advance our understanding about the origin of the virus”.

In this respect, Mike Ryan, executive director of the WHO Health Emergencies Program, warned at the news conference of the difficulty of finding complete consensus.

Chen Weihua in Brussels and Su Qiang in New York contributed to this story.