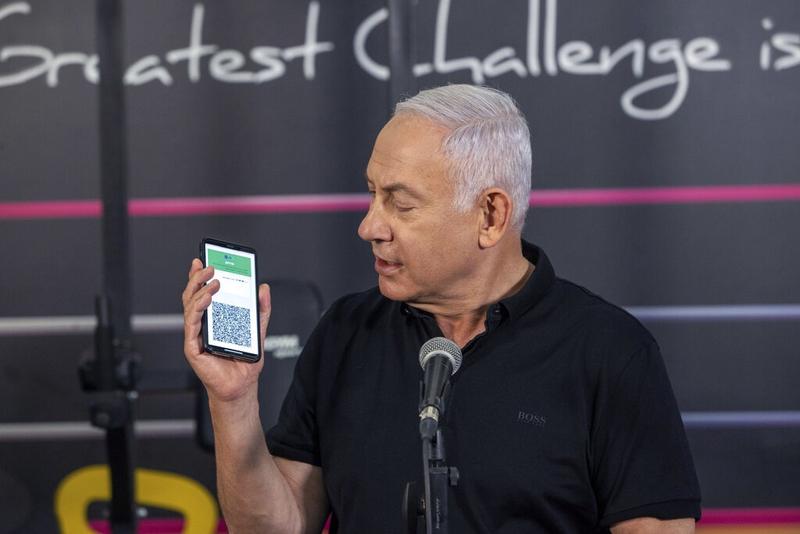 Israeli Prime Minister Benjamin Netanyahu talks to the media during a visit to the Fitness gym ahead of the re-opening of the branch in Petah Tikva, Israel, on Feb 20, 2021. (PHOTO / AP)

SYDNEY / WELLINGTON - Israel reopened swathes of its economy including malls and leisure facilities on Sunday, with the government saying the start of a return to routine was enabled by COVID-19 vaccines administered to almost half the population.

Shops were open to all. But access to gyms, hotels and theatres was limited to people with a “Green Pass”: those who have had both doses of the vaccine more than a week prior, or recovered from the disease with presumed immunity.

Pass-holders could prove their status by presenting a vaccination certificate or downloading a Health Ministry app linked to their medical files.

Coming exactly a year after Israel’s first documented coronavirus case, Sunday’s easing of curbs was part of a government plan to open the economy more widely next month, when Prime Minister Benjamin Netanyahu is up for reelection.

“We are the first country in the world that is reviving itself thanks to the millions of vaccines we brought in,” he tweeted. “Vaccinated? Get the Green Pass and get back to life.”

Mask-wearing and social-distancing were still in force. Dancing was barred at banquet halls. Synagogues, mosques or churches were required to halve their normal congregation sizes.

Elementary schoolchildren and pupils in the last two years of high school resumed classes in towns with contagion rates under control. Middle-school pupils were still home-learning, however, prompting some to stage a sit-down protest in a mall.

“I haven’t been in school in a year,” said 14-year-old demonstrator Rotem Bachar. “How does it make sense to open malls up to crowds, while we can’t attend class if even they are capped at 15 to 20 pupils and have other precautions?”

Israel has administered at least one dose of the Pfizer Inc vaccine to more than 46% of its 9 million population, the Health Ministry says. The ministry said on Saturday that the risk of illness from COVID-19 dropped 95.8% among people who received both shots.

Israel has logged more than 740,000 cases and 5,500 deaths from COVID-19, drawing criticism of Netanyahu’s sometimes patchy enforcement of three national lockdowns. The government has pledged that there will not be a fourth.

But Nachman Ash, a physician in charge of the country’s pandemic response, told Army Radio that another lockdown “is still possible ... Half of the population is still not immune.”

Malaysia moved up its COVID-19 inoculation drive by two days as the first batch of vaccines arrived in the Southeast Asian nation on Sunday.

Malaysia aims to vaccinate at least 80% of its 32 million people within a year as it pushes to revive an economy that, slammed by coronavirus-related curbs, recorded its worst slump in over two decades in 2020.

It has imposed more lockdowns this year amid a fresh wave of coronavirus infections. The country has recorded 280,272 cases and 1,051 deaths.

A total of 312,390 doses of the Pfizer-BioNTech vaccine were delivered to Malaysia on Sunday morning, with more expected in coming weeks.

“The second delivery will be made on Feb. 26, and we will continue to receive (Pfizer) deliveries every two weeks until it is completed,” Science Minister Khairy Jamaluddin said in a virtual news conference.

Malaysia has secured 32 million doses from Pfizer and BioNTech.

Vaccine doses from China’s Sinovac Biotech are scheduled to be delivered in bulk on Feb. 27, pending approval from local regulators, Khairy said.

Pfizer’s vaccine will be used to inoculate medical personnel from Saturday, a day after enough supplies to treat 117,000 people are due to arrive in the country, he said.

Australian Prime Minister Scott Morrison was injected on Sunday with the first dose of a COVID-19 vaccine jointly developed by Pfizer Inc and BioNTech, as the nation started its inoculation program a day ahead of schedule.

Up to 4 million Australians are expected to receive a COVID-19 vaccine voluntarily by March, with Morrison and Paul Kelly, the country’s chief medical officer, among a small group of Australians receiving the first inoculations.

“We’re here making some very important points,” Morrison said moments before cameras captured the first person being injected at a medical centre in Sydney. “That it is safe, that it’s important, and we need to start with those who are most vulnerable and on the frontline.”

Doses of the Pfizer inoculations, which need to be kept at temperatures well below freezing, were still being distributed to 16 vaccine hubs around Australia in preparation for the broader rollout of the vaccines on Monday.

A small number of older Australians at the Castle Hill Medical Centre in the western part of Sydney, aged-care staff, and frontline nurses and workers were among the group injected on Sunday, officials said.

The country is enjoying a second day without a single new COVID-19 transmission in the community, officials said. The vast majority of its population will be injected with the AstraZeneca vaccine by the end of October.

On Saturday, thousands of people attended anti-vaccine rallies in major Australian cities to protest what they incorrectly believed to be mandatory vaccinations.

The country aims to expand its vaccination program by rolling out AstraZeneca-Oxford shots by the end of February and secure more doses from India, South Korea, Cuba and Russia.

Iran's Interior Minister Abdolreza Rahmani Fazli said Saturday that the borders between Iran and Iraq will be closed over the resurgence of COVID-19 in the Iranian southwestern province of Khuzestan.

The pandemic has so far claimed 59,409 lives in Iran, up by 68 in the past 24 hours, said Sima Sadat Lari, the spokeswoman for Iranian Ministry of Health and Medical Education, during her daily briefing.

Of the newly infected, 472 were hospitalized, said Lari. A total of 1,337,877 people have recovered from the disease and been discharged from hospitals, while 3,677 remain in intensive care units, she added.

According to the spokeswoman, 10,387,561 tests for the virus have been carried out in Iran as of Saturday.

Jordan decided on Saturday to suspend the reopening of more sectors due to a recent increase in COVID-19 infections.

Jordan's Minister of State for Media Affairs Ali Ayed said the country is witnessing increasing recorded infections, positive rate and fatalities, especially among those infected with the highly contagious variant of the novel coronavirus.

The national anti-pandemic committee has agreed to not reopen any additional sectors, said the minister in a statement.

Jordan has recently reopened schools for the first three grades and decided to open gyms and restaurants, amusement parks and wedding halls.

Also on Saturday, the Ministry of Education announced that the second stage of resuming in-class education, which includes 10th and 11th graders, will be suspended for one week due to the epidemiological situation.

Jordan reported 15 COVID-19 deaths and 2,200 confirmed cases on Saturday, raising the death toll to 4,543 and the total tally to 359,811, according to a statement by the Ministry of Health.

New Zealand reported one new case of COVID-19 on Sunday, said the Ministry of Health in a statement.

The new case reported was a recent returnee in managed isolation. There was no new case of COVID-19 in the community, nor any linked to the Auckland February cluster, said the ministry.

The total number of tests processed by New Zealand laboratories to date was 1,658,429.

Turkey on Saturday reported 7,857 new COVID-19 cases, including 635 symptomatic patients, as the total number of positive cases in the country reached 2,631,876, according to its health ministry.

The number of seriously ill patients is 1,180 in the country, said the ministry.

Lebanon received on Saturday the second batch of Pfizer-BioNTech vaccines.

A separate statement by the ministry said that infection with the coronavirus has been increasing sharply recently due to the new strain of the virus, which is characterized by faster transmission.

Kuwait reported on Saturday 862 new COVID-19 cases, bringing the total number of confirmed cases in the country to 183,322.

The tally of recoveries in Kuwait rose by 934 to 171,260, while 11,023 coronavirus-related patients were receiving treatment, it said.

All the new cases were imported cases and there has been no community case for six consecutive days.