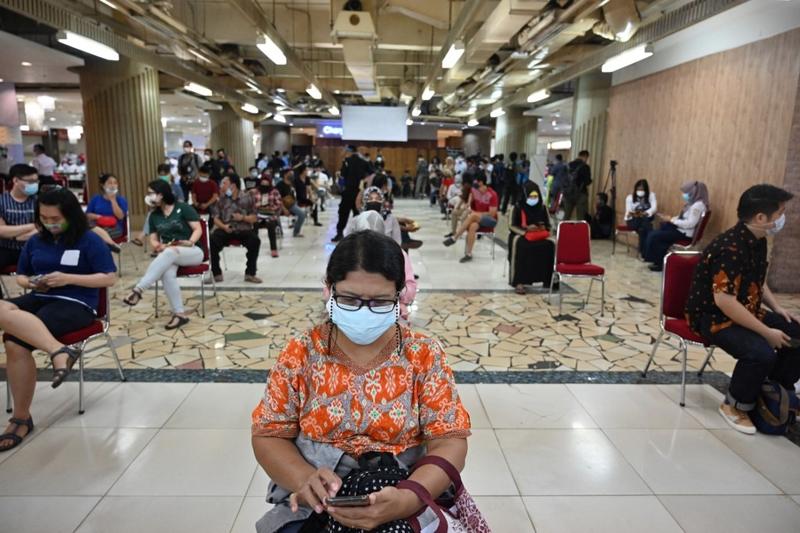 Vendors wait after receiving the vaccine for COVID-19 coronavirus at the Tanah Abang textile market in Jakarta on February 17, 2021. (ADEK BERRY / AFP)

On Wednesday, Indonesian President Joko Widodo visited Tanah Abang textile market in Central Jakarta to observe the implementation of the second phase of the vaccination for traders.

The government has set a target of vaccinating 1,500 participants in the market.

"Today we are conducting it at Tanah Abang Market. We have seen everything going well. The management in the field is very good," President Widodo said in his speech.

The event was the beginning of the second phase of the COVID-19 vaccination, the Indonesian president said, adding that the first phase, targeting health workers, started in mid-January and will soon be completed.

According to him, the second phase of the mass vaccination will continue in other regions after Jakarta.

"This will run. After Jakarta, it will run in other provinces, so we hope that the number (of people) vaccinated every day will increase drastically," said the president.

The massive vaccination in Indonesia began on Jan 14, a day after President Joko Widodo and several government officials received doses of the vaccine developed by China's biopharmaceutical company Sinovac Biotech.

Indonesia has recorded over 1.2 million COVID-19 cases since the deadly virus was confirmed to have spread to the country in March last year. The virus has killed more than 33,500 people.

More than 35,000 frontline staff in the Australian state of New South Wales (NSW) will be among the first in the country to receive the Pfizer COVID-19 vaccine from Feb. 22.

The NSW government said in a media release on Wednesday all hotel quarantine workers, including those screening arrivals at the airport, health staff, cleaners, police officers and security guards would be at the front line to get the vaccine.

Health care workers who have the greatest exposure to potential COVID-19 patients will also be included in the first round of jabs.

Melbourne’s lockdown will be lifted from midnight after five days after Australia’s second-largest city was able to bring an outbreak of the UK strain of the coronavirus under control.

Victoria state Premier Daniel Andrews told reporters that schools, retail and hospitality will resume from Thursday. Offices will be allowed to return to 50 percent capacity. Still, wearing masks in public will remain compulsory, and household visits will be limited to five people.

“In a broader sense, we are safe and open,” Andrews said in a televised media conference, but cautioned the latest outbreak had not yet been fully contained.

The lifting of restrictions will allow at least some spectators at the Australian Open tennis tournament in Melbourne, where players have competed in empty stadiums during the lockdown.

India's COVID-19 tally rose to 10,937,320 on Wednesday as 11,610 new cases were registered during the past 24 hours, said the latest data from the federal health ministry.

There are 136,549 active cases in the country, while 10,644,858 people have been discharged from hospitals after medical treatment.

Iran on Tuesday warned of the spread of a new COVID-19 variant in the country, as 17 patients infected with the mutated virus have been identified in Iran, seven of whom in the Qazvin Province.

Kianoush Jahanpour, head of Public Relations of the Ministry of Health and Medical Education, said the "risk of rapid spread of the (mutated) virus is serious."

Seven new coronavirus-related deaths were confirmed, raising the death toll in Iraq to 13,192, while the tally of recoveries surged by 1,622 to 609,800.

Israel has approved the shipment of Russian-made Sputnik coronavirus vaccine to the Hamas-ruled Gaza Strip, a unit of the Defense Ministry said.

The family of Hadar Goldin, one of two soldiers whose bodies have been held in Gaza since Israel’s 2014 war there, had petitioned the High Court of Justice to condition the entry of vaccine on the release of the remains and live Israeli hostages. 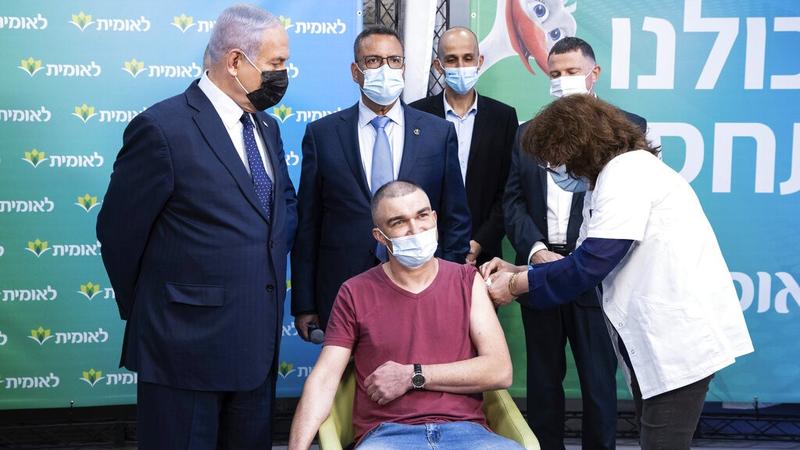 While Israel exited Gaza in 2005, it still controls access to the enclave, together with Egypt. The vaccine is being shipped to Israel from the West Bank-based Palestinian Authority.

Israeli officials announced on Tuesday that some four million people have received the COVID-19 vaccine.

Prime Minister Benjamin Netanyahu and Health Minister Yuli Edelstein made the announcement at a vaccination facility in Jerusalem, according to a statement issued by the PM's office.

Netanyahu urged those over 50 years old to receive the vaccine, saying about 570,000 people in this age group have not yet received the jab.

Cases continued to decline in Tokyo, which reported 378 infections on Wednesday. The positivity rate and number of serious cases also continued to drop. However, the Nikkei earlier reported that the government has decided it won’t lift the state of emergency this week, considering the strain on the medical system.

Japan began its vaccination program, which will start with a group of about 20,000 health-care workers who will be observed over the course of their two shots and after.

Japan on Tuesday confirmed 1,308 new daily COVID-19 infections, bringing the nation's overall tally of cases to 419,765, with the country ready to begin the initial step of its first vaccine rollout on Wednesday to medical workers.

Amal Abu Zeid, the Lebanese Foreign Ministry's representative to the joint Lebanese-Russian committee for the return of Syrian refugees to their homeland, told President Michel Aoun on Tuesday that Russia has informed him about a plan to donate Sputnik V vaccines to Lebanon.

Kuwait reported on Tuesday 964 new COVID-19 cases, bringing the total number of confirmed cases in the country to 179,488.

The Kuwaiti Health Ministry also announced five more deaths, taking the death toll to 1,014. The tally of recoveries in Kuwait rose by 810 to 167,601, while 10,873 coronavirus patients were receiving treatment, it said.

The Maldives has inoculated over 50,000 people against COVID-19, local media reported Wednesday.

Data from the Health Protection Agency (HPA) showed that 6,230 people were vaccinated on Monday, raising the country's total number of vaccinated to 50,047.

The Maldives has introduced a mobile COVID-19 vaccination service to visit households with immobile people, local media reported on Tuesday.

Mongolia on Wednesday reported 28 more COVID-19 cases in the last 24 hours, bringing the total number of infections to 2,444, according to an official statement.

Meanwhile, 17 more patients have recovered from the disease, bringing the nationwide tally to 1,777, said the country's National Center for Communicable Diseases, adding that the country has recorded four COVID-19-related deaths so far.

Mongolia is expected to launch a nationwide COVID-19 vaccination campaign next week, according to the health ministry.

Myanmar reported 22 new COVID-19 cases and two more deaths in the past 24 hours, according to the Ministry of Health and Sports on Tuesday.

New Zealand will lift COVID-19 lockdown in its largest city of Auckland and ease restrictions in the rest of the country from midnight on Wednesday, Prime Minister Jacinda Ardern said.

Auckland’s nearly 2 million residents were plunged into a snap three-day lockdown on Monday, after a more contagious COVID-19 variant that first emerged in Britain was detected in a family of three.

New Zealand reported two new community cases of COVID -19 just hours before Prime Minister Jacinda Ardern is due to decide whether to extend a lockdown in largest city Auckland.

The new cases are connected to the Auckland family that initially tested positive at the weekend. Ardern is due to hold a news conference at 4:30 p.m. local time Wednesday on the Auckland lockdown.

Meanwhile, 252 people recovered during the past 24 hours, taking the overall recoveries to 129,543, while one died from the virus, pushing the tally up to 1,544, according to a ministry statement quoted by ONA.

Palestine on Tuesday called for urgent international intervention to pressure Israel to allow the shipment of the coronavirus vaccines into the besieged Gaza Strip.

Palestinian government spokesman Ibrahim Milhem urged the World Health Organization "to condemn the Israeli measure and exert immediate pressure on Israel to allow the shipment of the vaccines into the Gaza Strip."

Palestine reported 1,043 new coronavirus cases and six more deaths, taking its tally of infections to 191,359 and its death toll to 2,139. The Palestinian Health Ministry also confirmed the detection of 136 cases infected with a new COVID-19 variant in the West Bank. 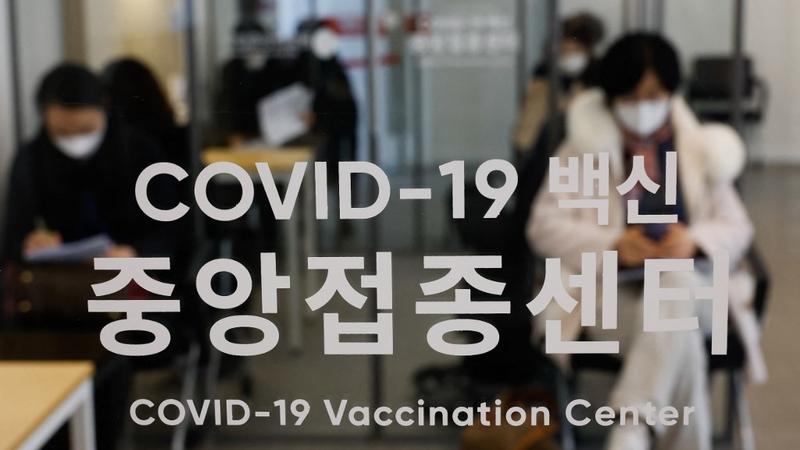 The government relaxed distancing curbs on Saturday to take effect starting this week, after getting on top of a third wave of COVID-19 outbreaks that peaked at around 1,200 daily cases in late December.

South Korea reported 621 more cases of COVID-19 as of midnight Tuesday compared to 24 hours ago, raising the total number of infections to 84,946.

It followed the Lunar New Year's holiday last week when family members traditionally gather together to share food and have a talk. The health authorities discouraged people from family gatherings to contain the virus spread.

Thailand on Wednesday confirmed 175 new cases of COVID-19 infection, mostly domestic, according to the Center for the COVID-19 Situation Administration (CCSA).

Those domestic cases included 114 which were confirmed via active testing in Pathum Thani province, north of Bangkok, and Samut Sakhon province, southwest of Bangkok, according to the CCSA spokesman.

The Department of Health (DOH) of the Philippines reported on Wednesday 1,184 new COVID-19 cases, bringing the total number of confirmed cases in the Southeast Asian country to 553,424.

The death toll climbed to 11,577 after 53 more patients died from the viral disease, the DOH said, adding that 271 more patients recovered, raising the total number of recoveries to 512,033.