All aboard for safer, smarter train travel 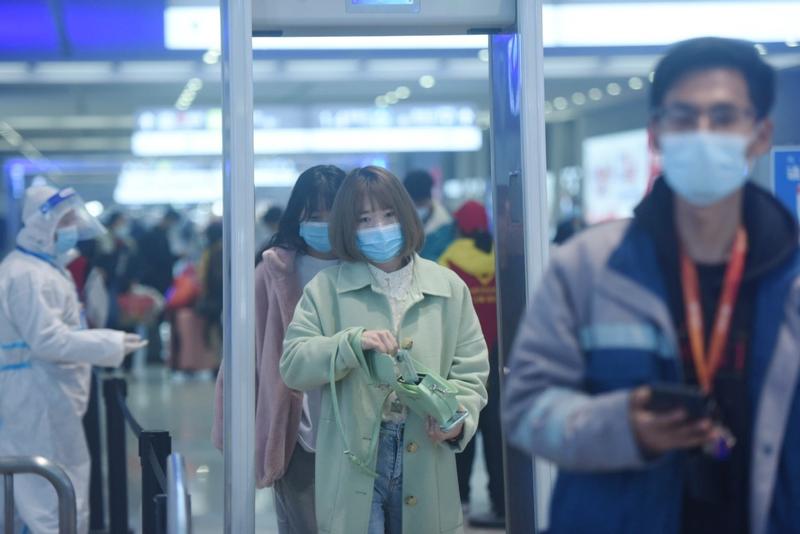 Although train trips are expected to drop during this year's Spring Festival travel rush because of the recent cluster of COVID-19 cases and the authorities' encouragement for people to stay put, railway operators are still busy trying to provide safe, comfortable quality services for customers.

Spring Festival is the most important period for family reunions in China and it usually leads to huge holiday traffic, and the travel rush is regarded as the world's largest annual human migration. In 2019, nearly 3 billion passenger trips were made during the 40-day travel period, similar to the previous year.

However, this year is different. To curb a resurgence in the spread of the novel coronavirus, people have been urged to avoid unnecessary travel and stay where they live and work to celebrate the festival.

Electronic ticketing is available in most railway stations across the country, which has increased efficiency and promoted service that doesn't require direct human contact

The festival begins on Friday this year. The 40-day travel rush started on Jan 28 and will end on March 8. Early travel statistics show that this year's train trips have already dropped compared with a year ago.

From Jan 28 to 30, the number of passenger trips decreased more than 70 percent year-on-year, according to the China State Railway Group, the national railway operator.

Electronic ticketing is available in most railway stations across the country, which has increased efficiency and promoted service that doesn't require direct human contact.

After purchasing an e-ticket, travelers can scan their ID cards to board a train without the need for a paper ticket. Foreigners can use the same system to buy tickets, but usually have to present their passports to staff members for verification.

At Nanjing South and Shanghai Hongqiao railway stations, foreign passengers with an e-ticket can scan their passports at a machine to board.

If travelers require paper tickets to have the cost of the trip reimbursed, they can use their ID cards to pick them up at ticket machines or windows.

By the end of last year, e-ticket services were in use in 2,878 railway stations, covering 99 percent of railway passengers, according to the China State Railway Group.

"Since the new facility was introduced, passengers no longer need to pick up paper tickets," said Zhang Yujing from the station's publicity office.

By the end of last year, e-ticket services were in use in 2,878 railway stations, covering 99 percent of railway passengers

"Time has been saved and the process has been reduced. After purchasing an e-ticket, passengers can use their ID card to board a train and alight at their destination. Under epidemic control measures, the decrease in face-to-face contact makes passengers feel safer and more comfortable."

Zhang said that in the past, after buying an e-ticket, passengers usually had to pick it up at the railway station and then line up to have it verified at a ticket-checking gate. During peak periods, passengers were usually lined up and it took at least five minutes to pass the gate. "Now, it takes a few seconds," she said.

Zhang Lin, who traveled from Xi'an Railway Station to Yulin, Shaanxi province, on Feb 2 said scanning her ID card to board a train is much more convenient.

Rail regulators have also introduced innovative food-dispensing services to not only reduce human contact, but also give travelers wider meal and snack options.

Rail regulators have also introduced innovative food-dispensing services to not only reduce human contact, but also give travelers wider meal and snack options

Nanjing South Railway Station, one of the busiest railway hubs in Jiangsu province, has installed the new food-dispensing machines or cabinets.

Restaurants and bakeries stock the machines and customers can either buy on site or order meals in advance. To purchase directly from the machine, passengers use their smartphones to scan a QR code and pay, and then collect a meal, either hot or cold, dispensed from the device.

Customers can download a smartphone app to order a meal from a restaurant in advance and pick it up when they arrive at the station.

All food providers are located in the railway station and are randomly inspected by the station's epidemic control department. Warm dishes are required to be placed in the cabinets within 90 minutes of cooking to keep the food fresh.

A good variety of dishes, both hot and cold, are provided by the vending machines, said Shen Qian from the Shanghai Railway Group, which is in charge of the new service.

She added that unlike regular food-vending machines hot dishes are available. A Nanjing dish, duck blood soup with vermicelli, is popular with customers, along with regular favorites such as cookies and other travel snacks.

Placing a food order in advance can save travelers a great deal of time, Shen said.

Passenger Zhang Yuan recently bought a baked cheese dish from a food cabinet at Nanjing South Railway Station. The 29-year-old said the cabinet is an innovative and convenient way to dispense food.

"I was in a hurry when I arrived at the ticket checking gate," he said. "Ticket checking was about to start and I had no time to run to the store to grab a bite."

Zhang said when he lined up for his ticket to be checked, he noticed the food cabinet near the gate, which he thought was a novelty. "It looked clean and shiny and the food in each drawer looked fresh," he said, adding that he could make the purchase without interacting with a cashier. "I feel safer this way."

He said that the dish cost 20 yuan (US$3), the same price a store usually charges. "I will definitely recommend (the cabinet) to my family and friends if they travel to and from Nanjing," he added.

Before the trip, the husband called a hotline and told volunteers their travel plans. The volunteers, all local railway employees, bought tickets, booked taxis and looked after them on their journey home. 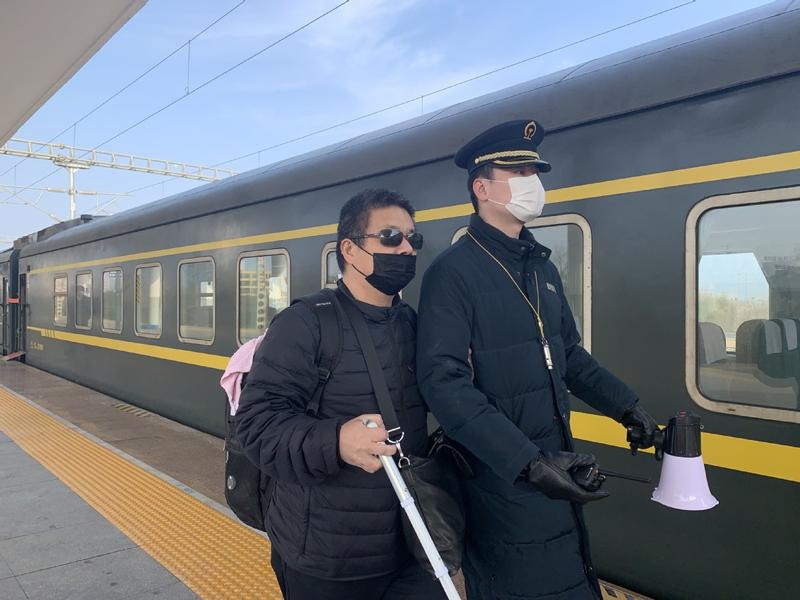 On Jan 9, the couple and a visually impaired friend set out on their journey from Shenzhen. A taxi, booked by volunteers, picked them up outside their home.

When they arrived at Shenzhen Railway Station, Yang Hong, another volunteer, met them at the entrance, guided them to the ticket checking gate and helped them board the train.

Yang informed the conductor and train attendants that the trio were visually impaired and saw them off.

On the train, the attendants offered them bottled water to ensure they weren't scalded by hot water while trying to use onboard taps.

When they arrived at Changde, volunteers waited for them on the platform and led them out of the railway station.

The service started five years ago when a railway employee noticed visually impaired passenger Xie Wenjing at Changde Railway Station struggling to get a train to Shenzhen. Railway workers later learned that there was a group of visually impaired massage specialists from Changde working in Shenzhen.

Xie spread the word among his friends and news of the support service was soon known among the group of visually impaired masseuses.

According to the Guangzhou Railway Group, more than 800 visually impaired passengers have used the service.

"Without help, we are like chickens with their heads cut off running around in a crowded railway station. They (the volunteers) are like our eyes," Xie said.

Yan Hao in Xi'an, Lu Ping in Shanghai and Lin Hao in Guangzhou contributed to this story