By Wang Ying in Shanghai and Ma Zhenhuan in Hangzhou

Range of activities provided for workers not traveling home 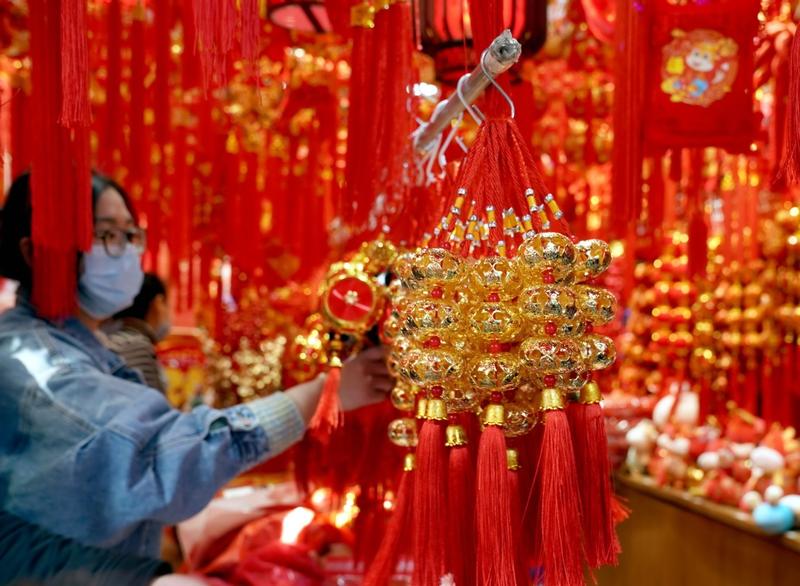 Shen Fei, a delivery worker from Luoyang, Henan province, is busy during his spare time preparing a special Spring Festival gala for his fellow workers.

Instead of joining the annual travel rush to return home for family reunions during the holiday, the workers are remaining in Shanghai.

"Many of my colleagues have opted to stay in the city this year due to the pandemic, so I decided to organize this gala and invite them to perform," said Shen, 50, who joined the online catering platform Eleme in Shanghai in 2018.

He said the gala would feature singing to both guitar and piano accompaniment, a talk show, dancing, martial arts and poetry and literature recitals.

The gala will be recorded before Lunar New Year's Eve on Thursday, and the footage will be posted online.

However, due to the COVID-19 pandemic, people have been urged to avoid unnecessary travel during the holiday period.

In recent years, some 3 billion passenger trips have been made during the Spring Festival holiday travel season, which this year runs from Jan 28 to March 8.

Wu Chungeng, an official with the Ministry of Transport, said the number of trips made this year would fall by as much as 60 percent compared with 2019.

Ahead of the holiday, while Shen makes food deliveries near bustling East Nanjing Road in Shanghai, Zhou Yan is busy planning a program for young people to gain a better understanding of the city during Spring Festival.

"On Sunday, we will bring together teenagers, other young people and families to start a three-day hike exploring Shanghai's urban areas. Our destinations include city blocks with distinctive architecture and historic buildings," said Zhou, a Shanghai native who, with her husband, runs a regeneration business specializing in old properties.

She said most of those on the hike would be from other areas of the country who have decided to remain in Shanghai for Spring Festival as the nation battles the spread of COVID-19.

"We organized a similar five-day trip around the city in late January, and participants were surprised that although they had lived in Shanghai for quite a while, they were able to discover the splendor of the city's architecture, as well as its rich history and culture," Zhou said.

Both Zhou and Shen are attempting to make Spring Festival more interesting for nonlocals who choose to remain in areas where they work. 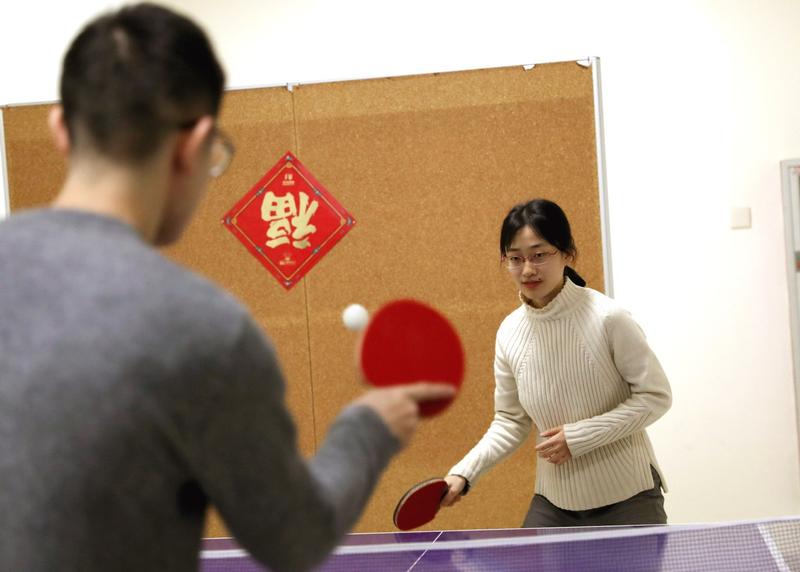 University students play ping-pong in Shanghai Jiao Tong Univeristy on Feb, 2, 2021. They put family reunions on hold during the holiday and stay in the campus. (PHOTO / XINHUA)

Many local governments and enterprises have introduced measures to encourage people to spend the holiday in cities and towns where they are employed.

In Yiwu, Zhejiang province, a county-level city regarded as the nation's small commodities trading hub, the local government has announced 17 policies aimed at encouraging people to spend the holiday locally.

With sporadic cases of COVID-19 reported in different areas of the country ahead of Spring Festival, people who remain in Yiwu during the holiday are each entitled to a 500 yuan (US$72) Spring Festival shopping voucher.

They can also join a variety of free cultural and sports activities at public venues such as cultural centers, libraries, museums and fitness centers.

The city's hospitals and clinics will waive registration and emergency treatment fees for outpatients from Sunday to Feb 21.

Primary and secondary schools in Yiwu are arranging free winter camps for children whose parents remain in the city for the holiday, and landlords have been encouraged to reduce rents.

Numerous other local governments have announced plans to help employees who decide not to return home.

In the Xiangcheng district of Suzhou, Jiangsu province, migrant workers are each entitled to a subsidy of 500 yuan, while in the Shunde district of Foshan, Guangdong province, skilled workers can receive subsidies of 400 yuan to 1,600 yuan, based on their level of expertise, according to Guang Ming Daily.

"There are about 3 million nonlocal employees alone in Wenzhou, Zhejiang, and employers are willing to offer bonuses to keep staff at the end of the lunar year and in early spring, when there is traditionally a shortage of workers," Zhou Dewen said.

Chen Jianliang, chairman of Hudong-Zhonghua Shipbuilding, said the Shanghai company would spend about 50 million yuan on subsidizing its skilled workers who remain in the city for Spring Festival. 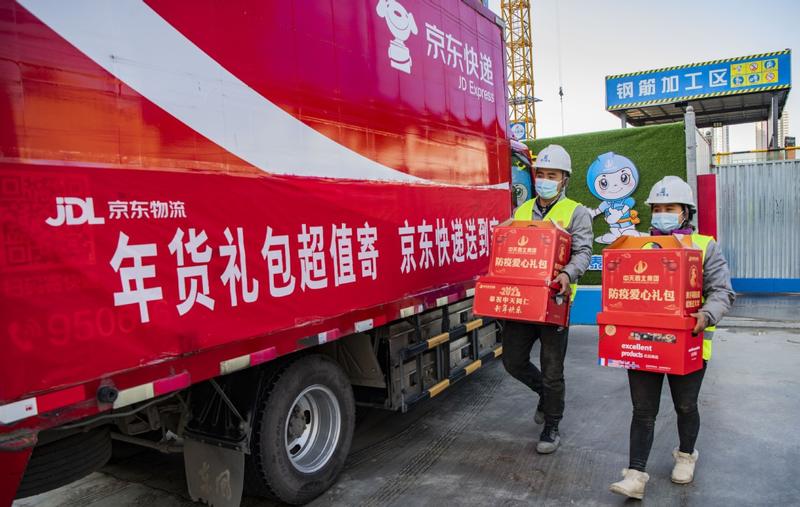 Workers at a construction site in Xi'an, Shaanxi province, receive festival gifts from JD. They will not travel home for traditional Spring Festival family reunions this year. (YUAN JINGZHI / FOR CHINA DAILY)

More than 80 percent of the workers at the company, a unit of China State Shipbuilding Corp, come from outside of Shanghai, who would stay in Shanghai for the holiday.

Chen said that during the holiday, most workers are entitled to a daily allowance of 500 yuan, Lunar New Year's Eve dinner sets, special merchandise, leisure activities and healthcare necessities.

Zhao Wen, a deputy director of the Chinese Academy of Social Sciences, said, "Fewer people traveling will effectively minimize the spread of COVID-19 and also help contain it when work resumes after the holiday."

Privately-owned Zhejiang Grandwall Electric Science & Technology Co has announced an incentives package for its employees who remain locally during Spring Festival, including a 500 yuan holiday subsidy and two-week compensatory vacations in their hometowns after June.

Pan Jian, executive assistant at the company, said: "About 30 percent of our staff members come from distant provinces such as Yunnan, Guizhou and Sichuan. For each of those from outside Zhejiang who needs to return home for Spring Festival, we are providing an allowance of 2,000 yuan per trip."

Zhang Fei, a delivery worker in Shanghai for ZTO Express, and his wife, who works for a cosmetics packaging company, are planning to delay their trip home until after Spring Festival to reduce health risks during the busy holiday travel period.

It takes 12 hours to drive from Shanghai to their home in Anhui province, but traffic jams often double the journey time, Zhang said.

The couple has sent several boxes of food and clothes to their daughters, who are age 5 and 10, along with money for their parents back home. However, Zhang regrets that his parents are having to raise the girls and that he and his wife are missing important times in their children's lives.

Zhou Yongfei, general manager of Hangzhou Bapima New Energy Vehicle Co, based in the Zhejiang provincial capital, said: "Some 70 percent of our nonlocal employees will stay here for Spring Festival. We are giving each of them a payment of 100 yuan from Feb 1 to Lunar New Year's Eve and a further 200 yuan per day for the week after that.

"Everyone is eager to return home during Spring Festival, but with a rising number of orders and labor difficulties during this period, we are encouraging more employees to stay in Hangzhou for the holiday," said Zhou Yongfei, who supervises a large number of drivers.

According to Zhou Dewen, the economist, encouraging employees to spend Spring Festival in the cities and towns where they work can bring many benefits.

From a business perspective, companies who have most of their employees close to hand immediately after the holiday are in a good position to resume production and ensure supply chain consistency, particularly those with staff members who do not need extra training, Zhou Dewen said. 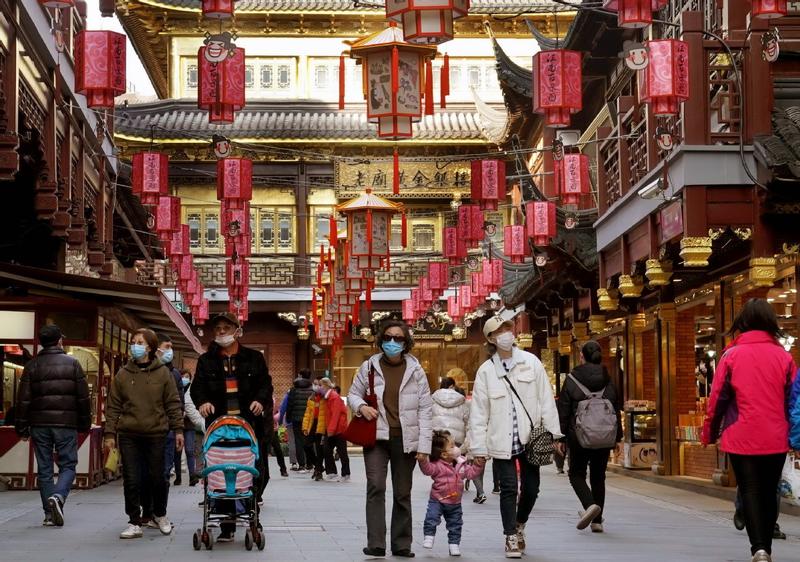 Tian Jialu, a homemaker from Shenyang, Liaoning province, whose three-member family moved to Shanghai in 2018, has drawn up a set of plans for the holiday.

"We will go to the parks if the weather is good and also take our daughter to an art exhibition and a concert," she said.

Having sent clothes and food to older members of the family at home, Tian said she would introduce a "hometown flavor" for their first Spring Festival celebrations in Shanghai.

"Dumplings will be ready by midnight on Thursday, and we will eat them to ring in Chinese New Year," she said.

Wang Suping, 52, from Wuhu, Anhui province, will put aside her housekeeping duties in Shanghai during the holiday. Instead, she and her husband will spend some quality time with their 8-year-old grandson in the city.

"I'm not planning any housekeeping work until the eighth day of the Lunar New Year, as I think that being with our grandson is most important," Wang said.

He Fengqin, from Luzhou, Sichuan province, who also works as a housekeeper in the city, will miss a family reunion at home with her daughter and son this year.

"I will chat to them via video link on Lunar New Year's Eve. At this critical time, I do not want to create any problems for our country," He said.

She added that it usually takes her two days to travel home by bus－a journey that includes three transit stops.

"I will spend Chinese New Year with two friends from my hometown. We will have our traditional Spring Festival breakfast of glutinous rice balls stuffed with lard oil, peanuts, walnuts, sesame seeds, sweet osmanthus and crystal sugar. We will also go shopping," He said.

Zhang Wenhong, leader of the Shanghai team of experts treating COVID-19 patients, said: "I want to thank people who have decided to stay in the areas where they work for Chinese New Year. Such gestures should be regarded as a sacrifice and contribution to the nation."

He Qi and Wang Youxi contributed to this story.