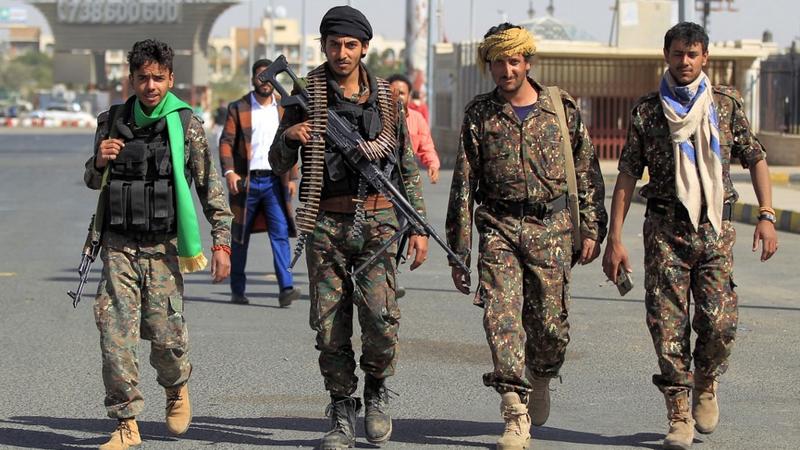 In this Dec 9, 2020 photo, security forces loyal to the Houthi group walk while on duty during a mass wedding for thousands of couples including the poor, handicapped, and wounded, in Yemen's capital Sanaa. (MOHAMMED HUWAIS / AFP)

ADEN, Yemen - Yemen's government said on Sunday that the US revocation of designating the Houthi rebel group as a "foreign terrorist organization" would complicate Yemen's years-long crisis.

Yemen's Information Minister Muammar Iryani said in a press statement that the revocation "sends a wrong message to the rebel group and its Iranian backers by giving them more courage to continue their violent military approach."

ALSO READ: US to revoke terrorist designation of Yemen's Houthis

The minister said the move by the new US government under President Joe Biden "will contribute to complicating the Yemeni crisis, prolonging the coup, and will exacerbate the humanitarian suffering caused by the years-long war that was waged by the militias."

On Friday, a US State Department official confirmed that Secretary of State Antony Blinken intends to remove the Houthi group from the Foreign Terrorist Organizations list and had notified the US Congress of this intention.

The move came one day after Biden announced an end to US support for the Saudi Arabia-led coalition's offensive operations in Yemen.

Yemen has been mired in civil war since late 2014 when the Iran-backed Houthi rebels seized control of several northern provinces and forced the Saudi-backed government of President Abd-Rabbu Mansour Hadi out of the capital Sanaa.

The Saudi-led coalition intervened in the Yemen conflict in March 2015 to support Hadi's government. The war in Yemen has killed tens of thousands of people, displaced 4 million others, and pushed the country to the brink of famine.