Provincial capital has recovered from tough times in 2020 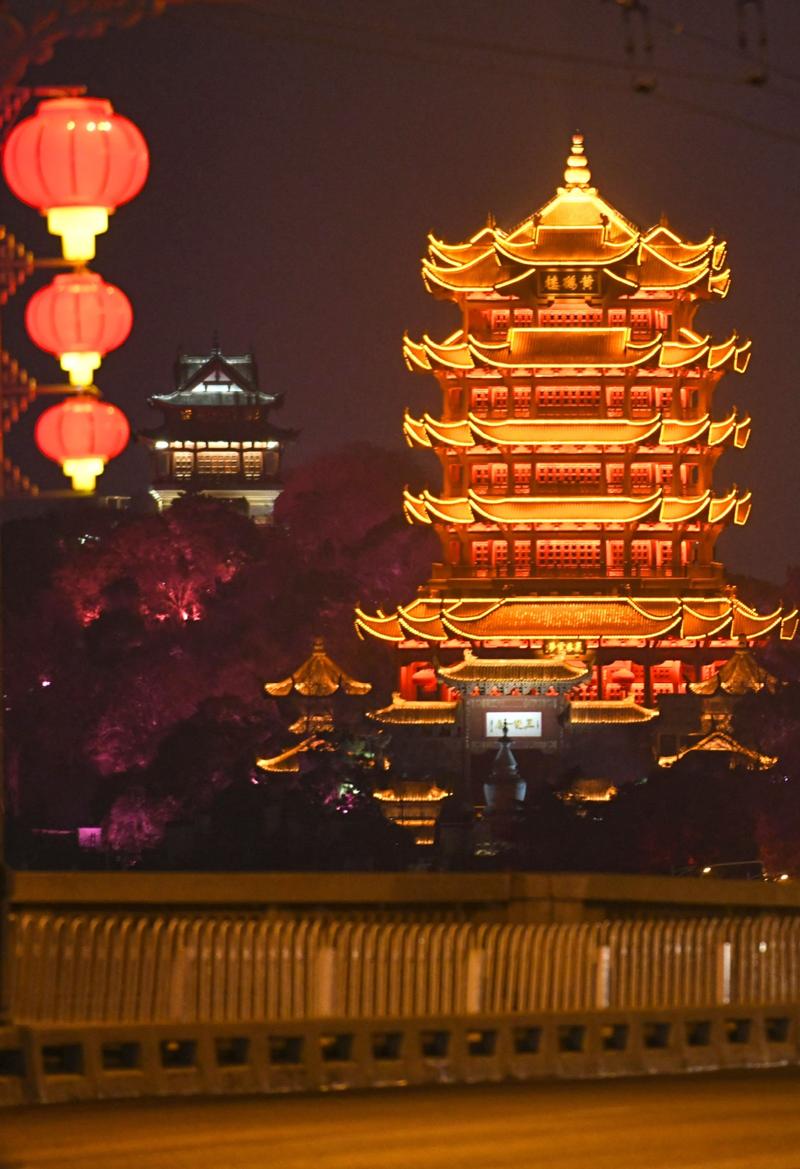 Yellow Crane Tower in Wuhan is illuminated ahead of the Spring Festival holiday. (PHOTO PROVIDED TO CHINA DAILY)

Residents of Wuhan, Hubei province, are busy with their preparations for Lunar New Year, which is on Friday.

I realize that health and family are the most precious things in life, and I plan to reduce the time I spend socializing with colleague

Last year, however, this provincial capital, which has a population of 11 million, experienced a vastly different Spring Festival as it grappled with the onset of the novel coronavirus outbreak.

To contain the outbreak, the central government enforced a lockdown in the city on Jan 23 last year, the day before Lunar New Year's Eve. Transportation was halted, people self-isolated at home and medical workers and volunteers worked to combat the virus.

One year later, the city's residents are moving on with their lives, but they are taking more care. In parks, seniors sing as children play with their parents, but everyone wears a mask.

Wan Xingrong, 65, who recovered from COVID-19 in March, said she is living a busy and happy life in retirement by taking photography classes online. However, she remains a little worried by the fact that she has had the disease.

She no longer buys food in her neighborhood supermarket, choosing instead to cycle to an open market.

"The market is in the fresh air and I get good exercise riding my bicycle," she said.

"Last year was a really hard one," said Wan, whose father died from the virus.

At 7 am on Jan 23 last year, Wan traveled by train from her home in Xiangyang, Hubei, to visit her 89-year-old father in Wuhan. 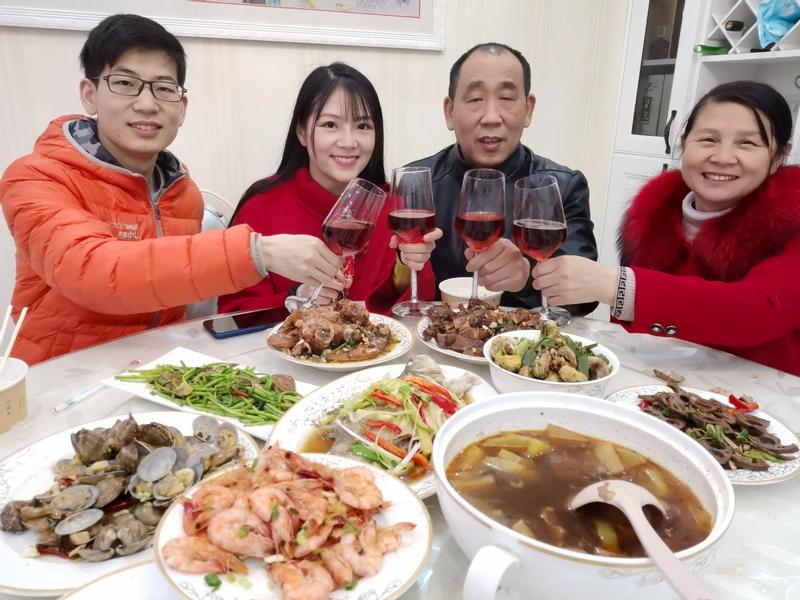 Zhang Xiaobing, second right, enjoys a family gathering with his wife and children in Wuhan, Hubei province. Zhang worked as a volunteer transporting bodies during the pandemic in the city last year. (PHOTO PROVIDED TO CHINA DAILY)

Three hours later, while she was still on the train, the lockdown took effect in the city. She could have got off the train during a stop in the middle of her journey, but decided not to.

"I promised my father I would spend Spring Festival with him, and I had to keep my word. If the virus was serious enough to close a city, I needed to be with him to stop him worrying," she said.

Wan's mother died in 2012 and her father lived alone. When she arrived at his home, she found he had symptoms similar to those of a cold, but he was later confirmed to have COVID-19.

To avoid her father becoming unduly concerned, Wan did not wear a face mask while she was with him.

Her father, who had underlying health conditions, died on Feb 5, one week after being told he had COVID-19.

Funeral home workers disinfected his body before sending it for cremation. For safety reasons, Wan was not allowed to accompany her father on his last journey.

She was also later found to have COVID-19 and was hospitalized.

"I was really depressed about everything, but had to try my best to survive. I never believed that I would die," she said.

She now performs baduanjin, a traditional Chinese exercise, in her yard every day. She also sings and takes the online photography classes to aid her recovery－mentally and physically.

For Spring Festival next week, she plans to take photos outdoors with her husband.

"I miss my son, who works in Shanghai, but considering the overall situation regarding the pandemic, I would rather he not return home this year or even next," she said.

In December, the Hubei government issued a guideline aimed at containing the virus during the Spring Festival holiday. The guideline targets a reduction in the flow of people and the number of group gatherings, along with strengthened personal and community prevention efforts.

Wan said: "We must follow professional advice to wear masks and wash our hands. Just doing whatever you want to do is selfish. After we get through these tough times, then we can have fun."

When the pandemic ends, Wan said she wants to travel to Tibet autonomous region and photograph the stunning scenery. She also wants to visit and thank the doctor who treated her in Wuhan. 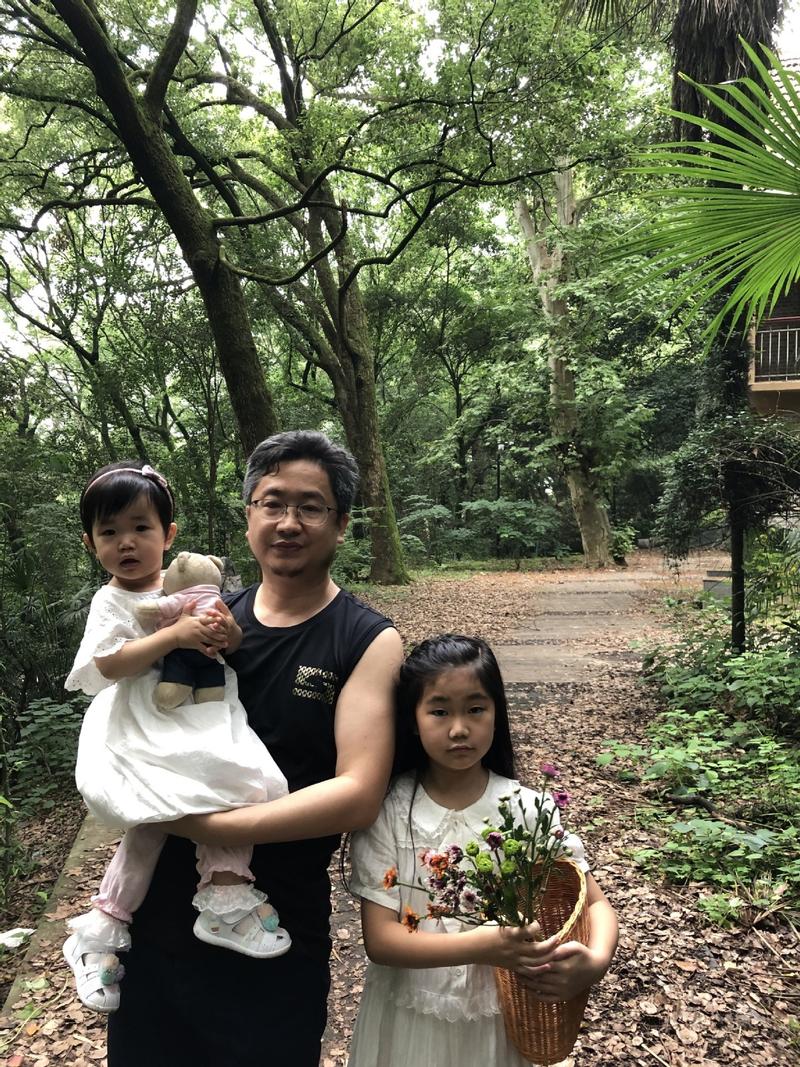 Sun Jinzhong poses with his daughters. Sun, a surgeon at Renmin Hospital of Wuhan University, was on 24-hour standby to treat patients infected with COVID-19. (PHOTO PROVIDED TO CHINA DAILY)

Last year, Sun Jinzhong, 41, a surgeon at Renmin Hospital of Wuhan University, was on 24-hour standby to treat patients infected with COVID-19.On Jan 23, he isolated himself in a house near the hospital after a colleague's nucleic acid test result came back positive.

"I was panicking that I might infect my two daughters. I missed them so much, but I couldn't spend Spring Festival with them," he said.

On Lunar New Year's Eve, his wife sent him a home-cooked meal. She wore a face mask and handed the food to him without getting out of the car.

Sun's hospital initially experienced a shortage of supplies. There was a lack of food in the canteen, no Hamzat suits, and sanitation workers quit their jobs.

"I got through those dark days by having a laugh with my colleagues via video chats as we ate lunch," he said.

In February last year, rising numbers of medical professionals arrived in Wuhan from across the country with supplies, including face masks and protective clothing.

Sun said, "Patients worried about me a lot and asked if I needed their help, which moved and comforted me. Those who have experienced the virus now seem to be taking more care each day."

As surgeons, Sun and his colleagues used not to follow disinfection procedures as strictly as doctors from the hospital's Respiratory Department. Now, they make every effort to observe all steps involved in hand-washing.

"Our habits have completely changed. I am also glad to see people wearing face masks on the subway and buses," Sun added.

This year for Spring Festival, he is not taking his family to his parents' home in Anlu, Hubei, for a holiday reunion as usual. The family will stay in Wuhan to avoid the long journey and the risk of infection.

Sun also hopes that life will return to normal this year and that he can spend more time with his children.

"I realize that health and family are the most precious things in life, and I plan to reduce the time I spend socializing with colleagues," he said.

After the outbreak emerged, Zhang Xiaobing, 54, told his two children to return to Wuhan, their hometown, from other cities where they were working.

His son and daughter quit their jobs in Shanghai and in Xishuangbanna, Yunnan province, respectively. They later found work in Wuhan so that they could be with their parents.

"Before they came home, my wife and I had nothing to do. Now, with them here, the house is full of joy and happiness. After getting through last year, having a happy and healthy family is my biggest wish," said Zhang, who owns a home service company.

"Every time I carried a body from a home, family members wailed over the corpse. Wuhan people really went through a hard time," he said.

He transported the bodies of COVID-19 victims from residential communities to the funeral home in the city's Wuchang district, logging the number he dealt with each day.

Zhang said that during the 17 days he worked as a volunteer, he and others transported the bodies of some 200 people, many of whom were older than 60.

He worked day and night as a volunteer, eating just one meal a day, which was always instant noodles.

"Along with three other volunteers, I didn't dare sleep, because phone calls could come at any time. When we were able to get some rest, we chatted over cups of tea and cheered each other up," he said.

Zhang, who owns a homemaking company, said fatigue was not a problem, but he and his colleagues needed to overcome fear and misunderstandings.

To allow the air to circulate, Zhang chose not to close the windows of his vehicle while transporting bodies, but he experienced facial paralysis. He now uses acupuncture to help his recovery. 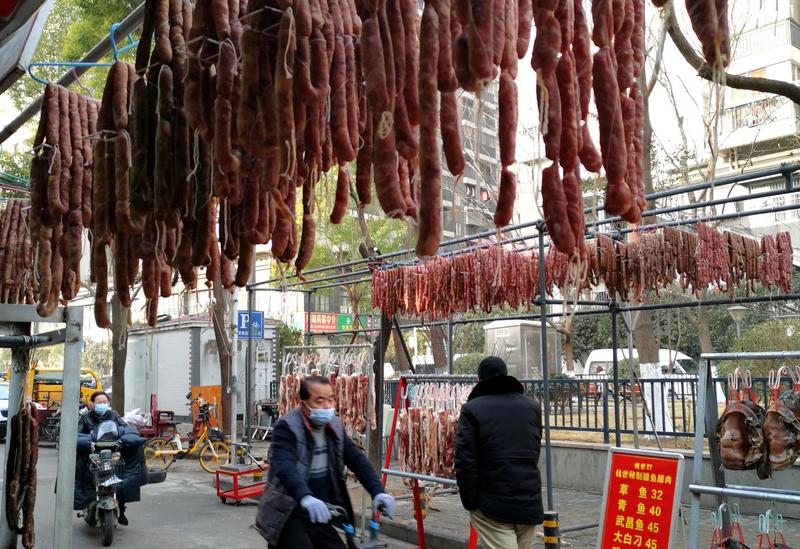 Preserved meat hangs in front of a store in downtown Wuhan. (SONG JIANCHUN / FOR CHINA DAILY)

He joined the volunteer team after the local civil affairs bureau found a friend of his to do such work, and the friend invited Zhang to join him. The bureau initially asked for a nursing home owner to do the work, but this request was declined.

"To be honest, I was risking my life doing this work, but as my friend had asked me to help, I couldn't shirk my duty and would have been ashamed to say 'no'," Zhang said.

"What annoys me the most is that some people I know said that I did this for money. We didn't receive any payment."

Zhang's daughter also worked as a volunteer, buying and distributing vegetables and medicine to residents.

Her father said: "When I helped with the transportation, my family, especially my daughter, gave me a lot of support and mental strength. As a volunteer herself, she has also faced misunderstandings and complaints, but I could tell she coped with all of this.

"There are so many kind-hearted people fighting for Wuhan."

"We were sitting anxiously in front of the television, watching the news about the virus. I felt sad and wasn't in a holiday mood," he said.

As a result of the pandemic, his company's revenue last year fell by 50 percent compared with 2019. He now hopes that life can return to normal as soon as possible.

"I have confidence in my business because I have seen how quickly and well Wuhan has recovered from the impact of COVID-19 thanks to the measures taken by the authorities and prompt support from people nationwide," he said.

For Spring Festival, he said he is preparing a big celebration and will spend a day buying food and other necessities at a market.

The Wuhan government has prepared festive shows and tours for residents, and delivery companies will continue to operate during the holiday.

From Feb 10 to Feb 26, to mark Spring Festival and Lantern Festival, light shows with the theme "We are together" will be staged over the Yangtze River in Wuhan.

Venues such as Yellow Crane Tower and other tourism areas will stay open during the holiday, as plum blossom will be in full bloom.