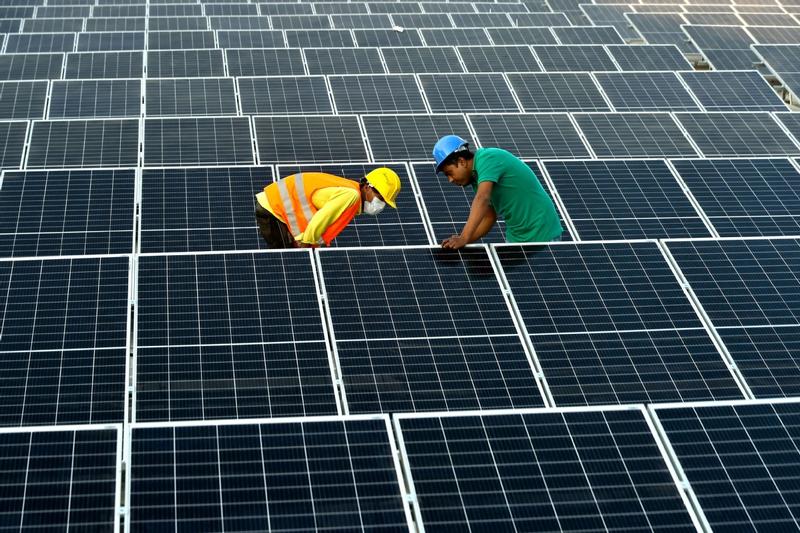 Employees arrange photovoltaic panels at a solar power plant, a project under the Belt and Road Initiative, in Dhaka, on Jan 3. (PHOTO / XINHUA)

Chinese investment in Bangladesh increased significantly from 2016 to 2020, especially in large infrastructure projects. In the next stage, Bangladesh expects to see more investment from China in the manufacturing sector, said people with knowledge of the matter.

The Belt and Road Initiative gained traction in Bangladesh when Chinese President Xi Jinping visited the country in 2016.

In the next stage, Bangladesh expects to see more investment from China in the manufacturing sector, said people with knowledge of the matter

A number of agreements were signed between the two nations under which US$40 billion investment was envisaged, including US$24 billion in bilateral infrastructure investment, said Naser Ezaz Bijoy, CEO of Standard Chartered Bangladesh.

Data from the Bangladesh Investment Development Authority show that foreign direct investment from the Chinese mainland reached $80.29 million during 2019-20, and FDI proposals from the mainland at the BIDA were US$9.12 billion for 521 projects.

Chinese investors are active in several sectors, including power, textile and garment, leather, trading and construction, the BIDA said.

The investment will also satisfy Bangladesh's desire for growth in the power sector, particularly the green power segment.

In his view, Bangladesh is a good choice for China to relocate the supply chain of its manufacturing industry. The world's second-largest economy will pursue higher level of manufacturing technology, and this move may make more opportunities available for Bangladesh, Mannan said.

The South Asian country has been doing well in the lower category of technology over the last few years. Now, it is also changing, with the aim of joining the higher technology group by 2041, he said.

The year 2041 marks the end of the country's second perspective plan that starts this year.

Although some Westerners accuse China of pushing Bangladesh into a "debt trap", Mannan said he is not concerned about the issue.

"If there is any economic problem with any particular financial transaction between government to government, there are rules to settle the problem.

"We are not afraid of a debt trap because we don't think it exists. Even if there is a problem, sometimes caused by misunderstanding or misinformation, we (Bangladesh and China) would always sit down and settle the problem by discussions like good friends," he said.

Besides, Bangladesh's external debt to GDP is around 15 percent, which is not a high debt level, said Bijoy at Standard Chartered.

"Compared to many countries, Bangladesh is in a very strong position in terms of the debt situation. Although its debt level will go up to some extent as China increases investment in the country, the return on investment in the long run will be even more rewarding," he said.

"We are seeing a lot of opportunities to collaborate in the information and communications technology sector. Apart from financial investment, there is also a lot of technical knowledge that can be imported to Bangladesh, and Chinese companies can earn loyalty fees and technical fees. These can be mutually beneficial," said Bijoy.

It means that Bangladesh's economy is to increase ninefold to US$3 trillion in 20 years, and the country will raise its urbanization rate from 35 percent currently to 65 percent by 2041.

The additional 30 percent urbanization that will take place affects a population of more than 50 million residents, said Bijoy.

Chinese companies are highly experienced in residence relocation, urban development and related constructions, so there is huge potential for China and Bangladesh to achieve mutual benefits, he said.