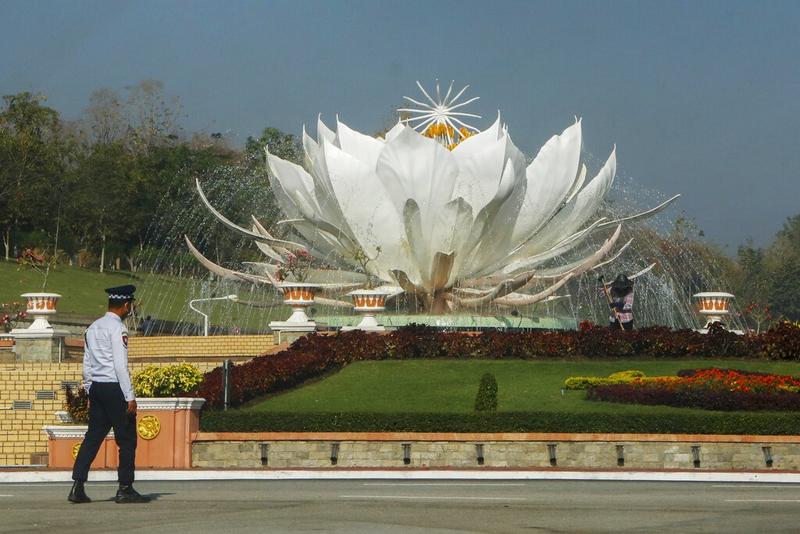 A traffic policeman walks at a roundabout in Naypyitaw, Myanmar, Feb 2, 2021. (PHOTO / AP)

China expressed its hope that the international community would contribute to the political and social stability of Myanmar, which saw relatively calm streets inside the country but increasing tension from outside.

The statement came after a yearlong state of emergency was declared and senior government leaders were detained on Monday following electoral tensions.

Foreign Ministry spokesman Wang Wenbin said on Tuesday, ahead of a United Nations Security Council meeting, that outside moves should be conducive to peaceful settlement of disputes and not to complicating the situation.

Barbara Woodward, the United Kingdom's ambassador to the UN, said Tuesday's virtual meeting on Myanmar was being held behind closed doors "to allow for frank discussion".

Brunei, speaking as the current chair of the Association of Southeast Asian Nations, said in a statement that the 10-nation bloc encourages "the pursuance of dialogue, reconciliation and the return to normalcy in accordance with the will and interests of the people of Myanmar".

"We reiterate that political stability in ASEAN member states is essential to achieving a peaceful, stable and prosperous ASEAN Community," the statement reads.

Russia's Foreign Ministry said in a statement on Monday, "We hope for a peaceful settlement of the situation in accordance with the current legislation through the resumption of political dialogue and the preservation of sustainable socioeconomic development of the country."

In Myanmar, the military announced a major Cabinet reshuffle involving about a dozen ministers. State Counsellor Aung San Suu Kyi and President U Win Myint were reported to be safe in their guarded residences, while some other senior officials and parliamentarians were still being detained.

The streets of Naypyitaw, the capital, were calm amid the presence of military personnel. Other cities were reported to be largely normal.

"Most of the businesses are open as usual," said Amara Thiha, a security researcher based in Yangon, the nation's largest city, adding that banking and telecommunication services have been restored.

The Military True News Information Team announced that all banks were open. All local banks temporarily suspended service for a number of hours due to poor internet connections on Monday, according to the Myanmar Banks Association.

Thiha said the situation in Myanmar was very calm compared with previous political turmoil in 1988 and 2007. The main tasks will be maintaining administrative efficiency in the coming months and reforming the electoral system in preparation for the new election.

Myanmar's military also re-formed the Peace Talks Committee on Monday to continue discussions with armed ethnic organizations in order to achieve a lasting peace, especially in the country's northern regions.

However, there was concern on Tuesday about possible uncertainties and outside interference. Dereck Aw, lead analyst for Myanmar at the global consultancy firm Control Risks, said potential large-scale protests could have "the potential to set in motion a prolonged crisis".

Aw said the best-case scenario involves the parties agreeing to de-escalate the situation and reaching a compromise in the coming weeks.

"The extent of the impact depends on the reaction from the international community," said Adam McCarty, chief economist at the research and consulting firm Mekong Economics, which operates in Myanmar and Vietnam. He added that Myanmar's foreign direct investment can be negatively affected by the political situation.

Thiha in Yangon said he is more worried about Myanmar's COVID-19 response, given the need to mitigate the economic impact on lower-income people in face of the pandemic and potential sanctions.