The oil painting, Setting Sail－the First National Congress of the Communist Party of China, is introduced in the first episode of a new TV program, History of the CPC in Classical Fine Arts, produced by China Media Group. (PHOTO PROVIDED TO CHINA DAILY)

To celebrate the 100th anniversary of the founding of the Communist Party of China, China Media Group, the National Museum of China and the Central Academy of Fine Arts are promoting a program called History of the CPC in Classical Fine Arts. It will highlight 100 representative artistic works related to the history of the CPC in the past 100 years.

The program contains 100 episodes, each 15 minutes long. Experts in CPC history and art were invited to appear on the program to introduce the works by reviewing the stories behind them and analyzing them artistically. The program is being aired on CCTV-1 since Monday, and the opening ceremony was held in Beijing on the same day.

The first episode introduces an oil painting called Setting Sail－the First National Congress of the Communist Party of China, created by artists He Hongzhou and Huang Faxiang in 2009. 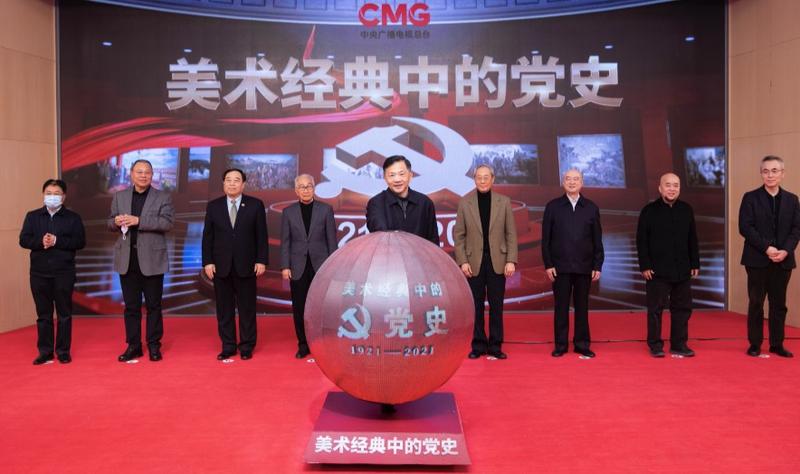 Guests at the opening ceremony of the program, History of the CPC in Classical Fine Arts, in Beijing on Monday. (PHOTO PROVIDED TO CHINA DAILY)

The painting shows the 13 founding members of the CPC who went aboard a boat on the Nanhu Lake in Jiaxing city, Zhejiang province, in 1921 to hold a meeting, which officially marks the establishment of the CPC.

According to He, inspiration came to him when he read an inscription by Dong Biwu, a founding member of the CPC, in a memorial hall. "The inscription is a sentence from the ancient Taoist classic Chuang Tzu, and it states that great causes may begin with something negligible. It inspired me to consider how to view the historical event, and how to combine my own impression of the event with the national memory of it."

Art critic Yin Shuangxi explains the symbolism of the work. "The boat and people on it are drawn in a true-life and specific way, with contrasting colors to create a strong visual impact," Yin says. "Meanwhile, the cloud and surface of the water are depicted in an abstract way to show the changeable environment. It means though the environment was complicated at that time, the CPC members remained resolute, stable and confident of their revolutionary cause."

Xue Jijun from China Media Group said at the opening ceremony that "every work shown in the program depicts the original aspiration of the CPC, and the works combine to be a long historical painting".

"The program will impress the audience both artistically and historically," he says. "It will lead the audience to view the history of the CPC from the angle of fine arts, remind Chinese people to remain true to our original aspirations, keep our mission firmly in mind and strive to realize the Chinese dream."