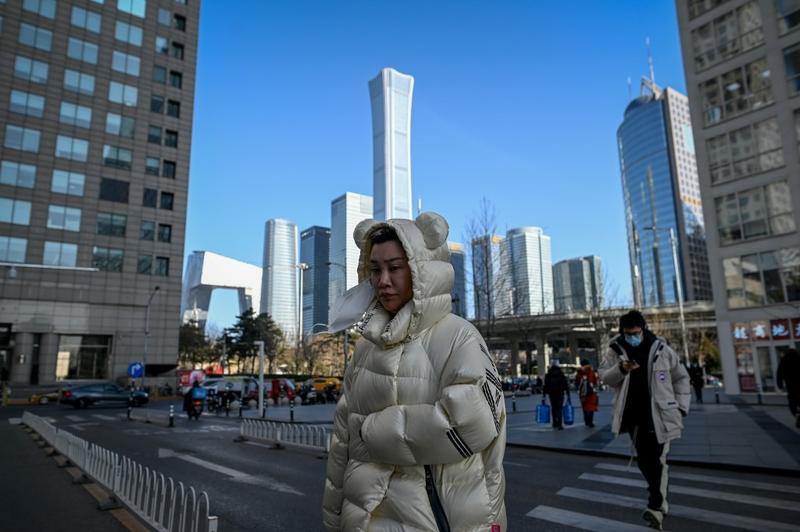 Pedestrians cross a street in the central business district of Beijing, capital of China, on Jan 18, 2021. (WANG ZHAO / AFP)

WASHINGTON - The International Monetary Fund (IMF) on Tuesday projected that China's economy will grow by 8.1 percent in 2021, 0.1 percentage point below the October forecast, according to the latest update to its World Economic Outlook (WEO).

China was one of these economies that returned back to the pre-pandemic projected level in the fourth quarter of 2020, "well ahead of" other major economies, IMF Chief Economist Gita Gopinath said

China was one of these economies that returned back to the pre-pandemic projected level in the fourth quarter of 2020, "well ahead of" other major economies, IMF Chief Economist Gita Gopinath said at a virtual press briefing Tuesday morning.

"China has been very successful in containing the pandemic and that has played a very important role to bring back activity much more quickly," Gopinath said in response to a question from Xinhua.

Echoing Gopinath's remarks, Malhar Nabar, division chief at the IMF's Research Department, told reporters that China's policy support has been "a big driver" of its "impressive rebound" in 2020.

"The public infrastructure spending support, and also the support that was extended to affected households and to firms, reinforced by aggressive actions by the People's Bank of China to provide liquidity support and ensure that credit provision remains strong," Nabar said.

"Going forward, we see a gradual handoff to private sector activity, starting out with a pickup in private investment activity," he said. "That's in fact already been seen in the second half of last year, and we expect that to continue."

Nabar added that in order to secure the recovery path, it's "vitally important" for China to ensure that rebalancing towards private consumption continues and "perhaps even is accelerated to an extent, with efforts to strengthen the social safety net."

According to the latest WEO update, China will grow 5.6 percent in 2022, while global economy will expand 4.2 percent in the same year.

The IMF projected global economy to grow by 5.5 percent in 2021, 0.3 percentage point above the October forecast.