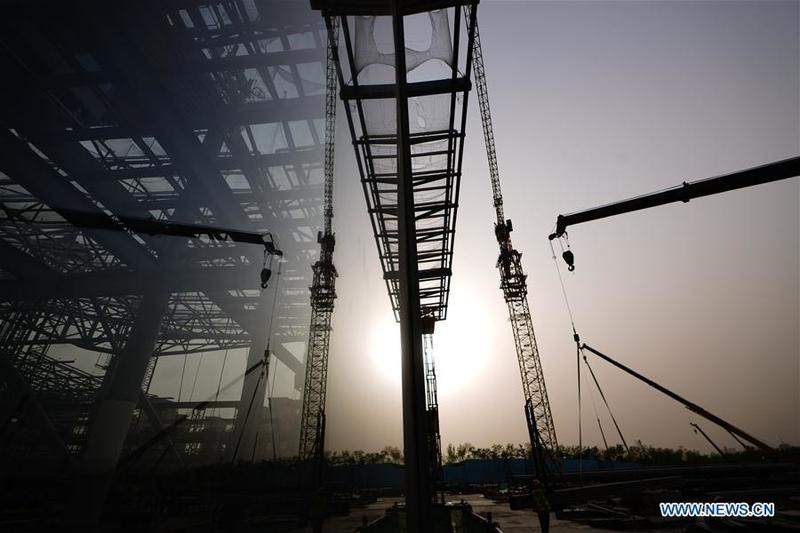 A construction site of the Xinghuo Railway Station in Beijing, capital of China, April 24, 2020. (XING GUANGLI/XINHUA)

GENEVA - Global foreign direct investment (FDI) plunged by 42 percent in 2020, a new report by the United Nations Conference on Trade and Development (UNCTAD) showed on Sunday, while China bucked the trend becoming the world's top recipient of investment flows.

In its latest Investment Trends Monitor, the Geneva-based UN trade and development body said that FDI fell sharply to an estimated US$859 billion last year, from US$1.5 trillion in 2019, and warned of further weakness this year, putting a sustainable recovery from COVID-19 pandemic at risk.

"FDI finished 2020 more than 30 percent below the trough after the global financial crisis in 2009 and back at a level last seen in the 1990s," according to the report.

The data showed that the decline was concentrated in developed countries, where FDI flows fell by 69 percent to an estimated US$229 billion, the lowest level in 25 years.

Flows to Europe dried up completely, tumbling by two-thirds to minus US$4 billion, according to the report. In Britain, FDI fell to zero, and declines were recorded in other major European recipients. A sharp decrease of 49 percent to US$134 billion was also recorded in the United States.

FDI flows fell by 37 percent in Latin American and the Caribbean, by 18 percent in Africa, and by 4 percent in developing Asia, the report added.

East Asia accounted for a third of global FDI in 2020, while FDI flows to developed countries fell by 69 percent.

The decline in developing economies was relatively measured at 12 percent to an estimated US$616 billion, the report showed, while China topped the ranking of the largest FDI recipients.

FDI flows to China rose by 4 percent to US$163 billion, making the country the world's largest recipient in 2020, followed by the United States.

In 2019, the United States had received US$251 billion in inflows and China received US$140 billion.

China's high-tech industries saw an increase of 11 percent in 2020, and cross-border mergers and acquisitions (M&As) rose by 54 percent, mostly in information and communications technology (ICT) and pharmaceutical industries, the report said.

"The global dependence on the supply chains of multinational enterprises in China during the pandemic also sustained the FDI growth in China," he added.

East Asia accounted for a third of global FDI in 2020, while FDI flows to developed countries fell by 69 percent, according to the UNCTAD report

The country saw its GDP increase 2.3 percent year on year last year and is expected to be the only major economy to post growth in the pandemic-ravaged year, according to the National Bureau of Statistics (NBS).

Looking ahead, UNCTAD warned that the global FDI trend is expected to remain weak this year.

"Risks related to the latest wave of the pandemic, the pace of the roll-out of vaccination programs and economic support packages, fragile macroeconomic situations in major emerging markets, and uncertainty about the global policy environment for investment will all continue to affect FDI in 2021," it wrote.

While sharply lower greenfield project announcements suggest that a turnaround in industrial sectors is not yet in sight, UNCTAD however stressed that strong deal activity in technology and pharmaceutical industries could push M&A-driven FDI flows higher.

"Overall, the global FDI is likely to follow a U-shape recovery, unlike the global trade and GDP which have been predicted to be a V-shape recovery starting already 2021. International investment projects tend to have a long gestation period and react to crises with a delay, both on the downward slope and in the recovery," Zhan estimated.

Earlier this month, UNCTAD announced that Secretary-General Mukhisa Kituyi will step down from his post on Feb 15.

The selection process for his successor will start after a vacancy is posted at the beginning of February.