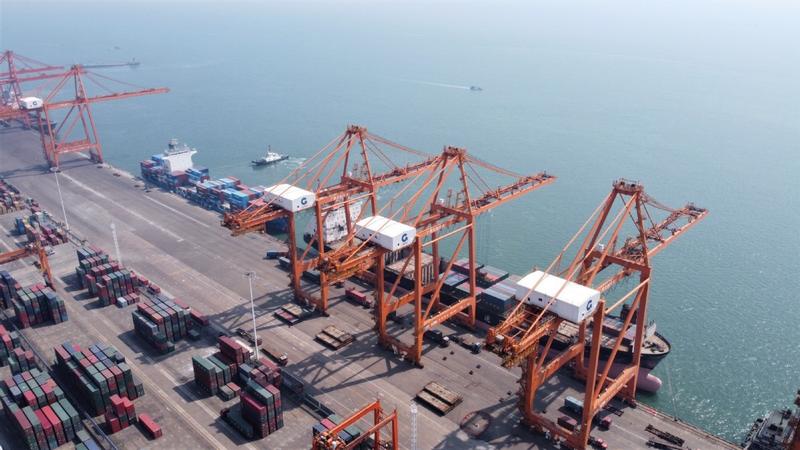 China is promoting a trade corridor featuring a multimodal transport network to boost socioeconomic development in western China and increase connections between China and economies of the Association of Southeast Asian Nations.

Cargo from inland China can be transported to the border and then shipped to ASEAN economies and then on to other parts of the world. Imports can also use the route to enter China.

With a multimodal transport network, including air, road, railway and sea, the New Western Land-Sea Corridor aims to provide a more cost-effective logistics choice for customers

With a multimodal transport network, including air, road, railway and sea, the corridor aims to provide a more cost-effective logistics choice for customers.

The corridor uses Chongqing and Chengdu as logistics hubs to connect with another important freight train passage, between China and Europe, which is a key project of the Belt and Road Initiative to connect Europe and northwestern China.

The corridor will also connect to regions in the Yangtze River Economic Belt via Chongqing and Chengdu.

The corridor, derived from a freight passage connecting Chongqing and Singapore that was established in 2017, has now become a State strategic project.

In August 2019, the National Development and Reform Commission issued a plan to promote the building of the corridor, telling government bodies and enterprises, including provincial governments, transport authorities and operators, to cooperate and draw up detailed plans.

The promotion of the corridor was written into proposals for China's 14th Five-Year Plan (2021-25) as a major project in November.

Since the plan was issued, more freight train services have operated along the corridor to boost international trade despite the COVID-19 pandemic. Data from January to November showed that ASEAN has become China's largest trading partner, replacing the European Union.

According to China Railway Corp, the national railway operator, a total of 3,600 sea-rail train services operated along the corridor last year, a rise of 73 percent year-on-year. They also handled 190,000 twenty-foot equivalent unit containers, an increase of 80 percent. 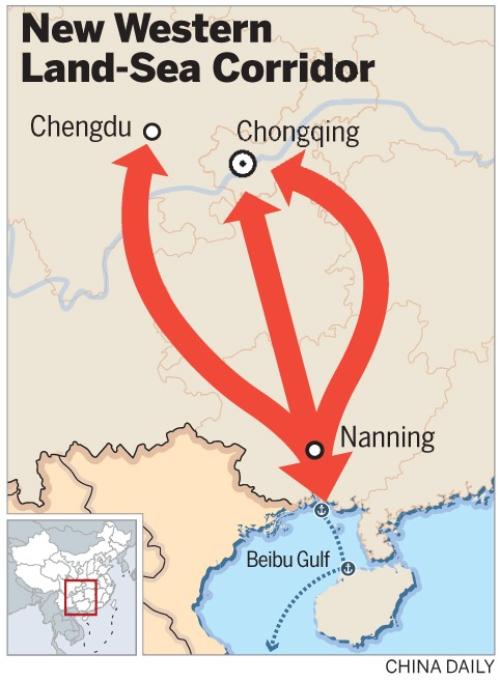 According to China Railway Container Transport, a subsidiary of China Railway Corp, from January to October some 124 freight train services operated between Nanning, capital of Guangxi, and Hanoi, capital of Vietnam, a year-on-year increase of 63 percent. This year, it expects to operate 200.

The freight trains travel between the two cities in three days. The outbound service－departing from Nanning and arriving in Hanoi－is loaded with cargo including daily commodities, electronic components, mechanical equipment and photovoltaic products. The inbound service mainly carries goods including tropical fruits from Vietnam and mineral products.

READ MORE: Ties with ASEAN get trade boost after expo

Opened in 2018, the number of services has increased each year, according to the company.

The service has been in regular operation since August 2019－running three services a week.

To reduce travel time, the cross-border train operates on a one-stop basis without the need to change carriages at the Pingxiang railway port in Guangxi, where the cargo can be inspected upon arrival.

According to the company, products from ASEAN countries such as fruit, electrical products and daily necessities take the return train and arrive in Nanning and are then sent across China.

Those products can also be sent to European countries via Chongqing and Chengdu by China Railway Express, which is the China-Europe freight train service.

"Thanks to the corridor, the cost of logistics has been greatly reduced," said Lin Junda, a manager of Guangxi Great Southern Gate Cross-Border E-commerce Operation, a company that handles logistics from Guangxi to Southeast Asian countries.

With a stable volume of cargo, a high frequency of trucks transporting goods and government subsidies, transport costs along the corridor have been reduced, he added.

As a trade corridor, it helps western regions be more actively involved in international economic cooperation and also boosts deep integration of transport, logistics and the economy.

Lin's company usually uses trucks to send cargo from Nanning to the port of Qinzhou in Guangxi and then sends it overseas by ship, mainly to Malaysia.

It takes about 15 days from Nanning to Malaysia, he said.

Wang Yangkun, head of the transport technology development research center at the NDRC's Institute of Comprehensive Transportation, said the corridor is not only a strategic passage to promote western development and form a new pattern of development, but also a land and sea intermodal link connecting the Silk Road Economic Belt and the 21st Century Maritime Silk Road.

"As a trade corridor, it helps western regions be more actively involved in international economic cooperation and also boosts deep integration of transport, logistics and the economy," he said.

The corridor, based on the domestic market, aims to use Southeast Asia as a bridge to connect China with the world, said Zhou Fangye, an associate researcher at the Chinese Academy of Social Sciences' National Institute of International Strategy.

"Amid the backdrop of the global economic recession, the progress to link the world may be slower, but it is the ultimate goal," he said.

In the medium term, the corridor will link western China with Southeast Asia to facilitate the transfer of industrial chains. In the long term, it will use Southeast Asia as a hub to further reach the world, he said.

Although efforts have been made and prospects are promising, challenges remain.

Wang said innovation will be required to develop a coordinated mechanism given the different parties involved.

"Coordinated development is also in line with China's regional development strategy in the new era," he said, adding that it requires teamwork from different parties, such as provincial governments and industries.

It also requires the removal of hurdles in the current system and the forming of an integrated management system, Wang said.

In October, 13 provincial-and city-level governments, including Chongqing and Guangxi, signed a framework agreement to promote the development of the corridor.

In December, a transport committee, initiated by China Railway Corp, was set up to coordinate logistics and public transport to boost the development of the corridor. Participants, including China Railway Container Transport and China COSCO Shipping Lines, are industry leaders in railway transport, ports and logistics.