US officials to face sanctions by China

By ​Zhang Yangfei and Zhou Jin 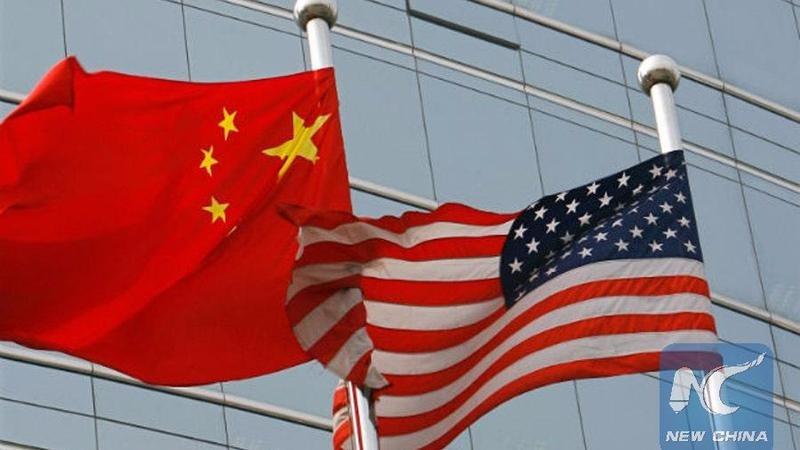 This undated file photo shows the national flags of China and the United States. (PHOTO / XINHUA)

China has decided to impose sanctions on US officials who act egregiously in matters related to Hong Kong and Taiwan, the Foreign Ministry said on Monday.

Foreign Ministry spokeswoman Hua Chunying announced the move after the US Department of State imposed sanctions on six Chinese officials last week over the arrests of more than 50 people in Hong Kong on subversion charges and US Secretary of State Mike Pompeo lifted curbs on exchanges between US and Taiwan officials.

Calling the US sanctions on the Chinese officials, which were announced on Friday, "blatant meddling in Hong Kong affairs and gross interference in China's internal affairs and judicial sovereignty", Hua said that in response to the "wrongdoings" of the US side, China has decided to impose sanctions on some officials of the US executive branch, congressional personnel, NGO personnel and their immediate family members.

Hong Kong is a society governed by the rule of law, she said, adding that the central government firmly supports the Hong Kong authorities in cracking down on illegal and criminal acts and safeguarding national security.

The US sanctions were imposed after Hong Kong police arrested 53 people on Jan 6 on suspicion of subversion under the National Security Law for Hong Kong. They were accused of organizing or being involved in an illegal primary election ahead of the now-postponed Legislative Council election to help the opposition camp secure an absolute majority of seats and ultimately paralyze the Hong Kong Special Administrative Region government by vetoing its budget.

A spokesperson for the Hong Kong and Macao Affairs Office of the State Council said in a statement on Monday that China strongly condemned the US sanctions, which blatantly interfered in China's internal affairs.

Those arrested had ignored the law and openly and illegally organized the so-called primary elections, which sought to hijack public opinion under the pretext of a "referendum", the spokesperson said.

Such an act, aiming to overthrow the Hong Kong government, posed a grave threat to the constitutional order of Hong Kong, seriously disrupted the region's electoral system and may have violated the National Security Law for Hong Kong, the spokesperson said, adding that Hong Kong police were defending the rule of law during their investigation and the arrests.

The spokesperson said US anti-China politicians such as Pompeo are accustomed to meddling in Hong Kong affairs and recklessly interfering in China's internal affairs.

They have imposed sanctions again and again recently, which can only reveal their sinister intention of making use of Hong Kong affairs and sparing no effort in order to contain China's development, the spokesperson said.

The so-called US sanctions are merely desperate political tricks and will not shake the firm determination of the central government and the Chinese people to safeguard national sovereignty, security and development interests as well as the long-term prosperity and stability of Hong Kong, the spokesperson added.

Since the promulgation of the National Security Law for Hong Kong, illegal activities such as violent protests and "Hong Kong independence" moves had been effectively curbed, helping rapidly restore Hong Kong's social order and protect the public's rights and freedoms, the spokesperson said.

The spokesperson added that Hong Kong's progress from chaos to order is unstoppable and the likes of Pompeo are nothing but ridiculous "antis" trying to stop the wheel of history from rolling forward in a fit of "doomsday madness" before stepping down from office this week.

The Liaison Office of the Central People's Government in the Hong Kong Special Administrative Region also strongly decried the US sanctions in a statement issued on Monday, calling the move "hegemonic" and wanton destruction of the rule of law and Hong Kong's high degree of autonomy as well as a flagrant provocation against the Chinese government and people.

The US move is doomed to futility, and will not hinder Hong Kong's return to stability or China's growth, the statement said.

The office said national security is the cornerstone of Hong Kong's long-term prosperity and stability. Only by fully and accurately implementing the National Security Law for Hong Kong and firmly and strictly enforcing it, can national security, social stability and people's livelihoods be effectively safeguarded, the office said.

US Ambassador to the United Nations Kelly Craft held a virtual talk with Taiwan leader Tsai Ing-wen last week after a planned trip to Taipei was called off.

On Thursday, the US mission to the UN released on its official website a video of remarks to students in Taiwan made in the UN's General Assembly Hall by Craft in which she claimed that in UN venues, the US supports a role for Taiwan on the global stage.

Hua said any attempt to challenge the one-China principle and to separate China will not be supported by UN members and will meet a dead end.

She noted that as verified by the UN, no meeting was held in the General Assembly Hall on Thursday, and the UN secretariat gave no approval to any country to hold any event in the hall that day.

The video was made after Craft sneaked into the hall and posed for the camera, abusing her right as the US permanent representative to the UN, she said.

"Such a sneaky trick serves nothing except to make herself a mockery and a laughing stock," Hua said.