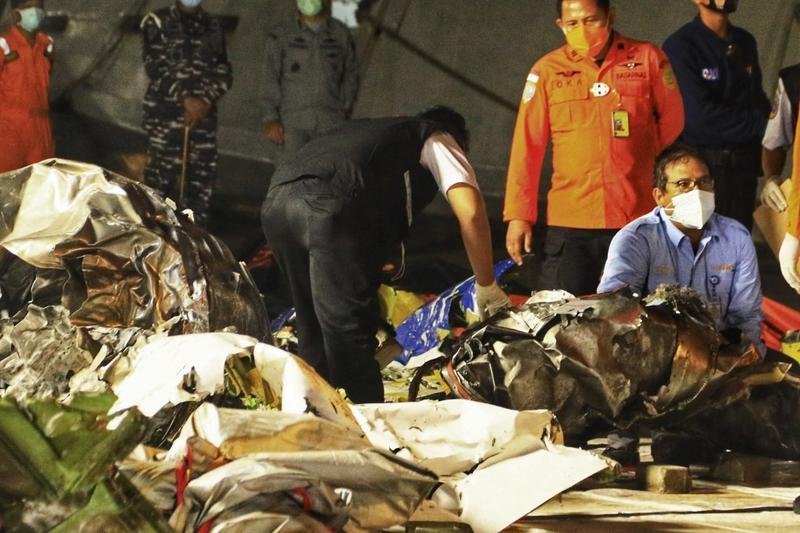 Investigators inspect the pieces of the plane debris recovered from the crash site of Sriwijaya Air flight SJY182, at the port in Jakarta on Jan 15, 2021. (AZWAR IPANK / AFP)

The 26-year-old Boeing Co 737-500 plane crashed into the Java Sea shortly after take-off from Jakarta on Jan 9 with 62 people on board.

Information stored on the flight data recorder has been downloaded and includes 370 parameters as well as 27 hours of recordings covering 18 flights, including the accident, National Transportation Safety Committee (KNKT) Investigator Nurcayho Utomo said in a video statement.

Parameters are a reference to the amount of data recorded from aircraft systems including the flight path, speed, engine power and flaps configurations.

The 370 parameters referenced by Utomo is an increase from 330 parameters announced on Friday.

“We are really hoping the CVR could be found to support the data we recovered from FDR,” Utomo said.

Indonesian divers found the CVR’s casing but are still searching for its memory unit, a navy officer said on Friday.

The search for the CVR and victims was on Monday extended by three days, with further extensions possible.

The KNKT plans to issue a preliminary report within 30 days of the crash, in line with international standards. Representatives from the United States and Singapore are aiding the investigation.