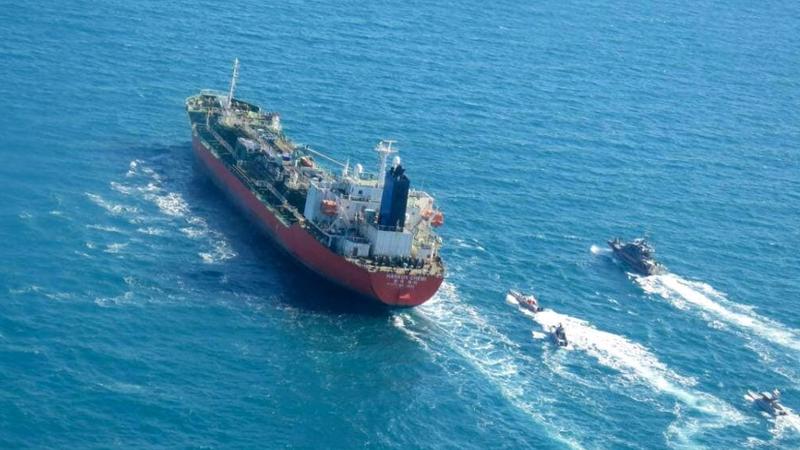 A picture obtained by AFP from the Iranian news agency Tasnim on January 4, 2021, shows the South Korean-flagged tanker being escorted by Iran's Revolutionary Guards navy after being seized in the Gulf. (TASNIM NEWS / AFP)

South Korea has asked Qatar for “maximum support” to secure the release of an oil tanker seized by Iran this month.

Choi traveled to Doha from Tehran after fruitless talks over the South Korean-flagged Hankuk Chemi, an oil-products tanker detained by the Islamic Revolutionary Guard Corps on Jan 4. He also discussed billions of dollars of Iranian money trapped in South Korea due to US sanctions.

Qatar shares the world’s biggest natural gas field with Iran and has maintained close ties with the country even as other Gulf Arab nations such as Saudi Arabia and the United Arab Emirates have backed US attempts to isolate it.

Relations between Tehran and Seoul have been strained since the US banned countries, including major Asian customers, from buying Iranian petroleum.

Iran says it has at least US$7 billion from oil sales stuck in South Korea and that it needs the money to purchase goods including coronavirus vaccines.

South Korea has shown a “lack of will” to release the oil funds and should avoid “politicizing” the Hankuk Chemi, Iran’s Deputy Foreign Minister Abbas Araghchi said on Sunday.

Iran said the ship was violating marine environmental laws, something its operator has denied. Around 20 crew members are being held with the ship at Iran’s Bandar Abbas port.