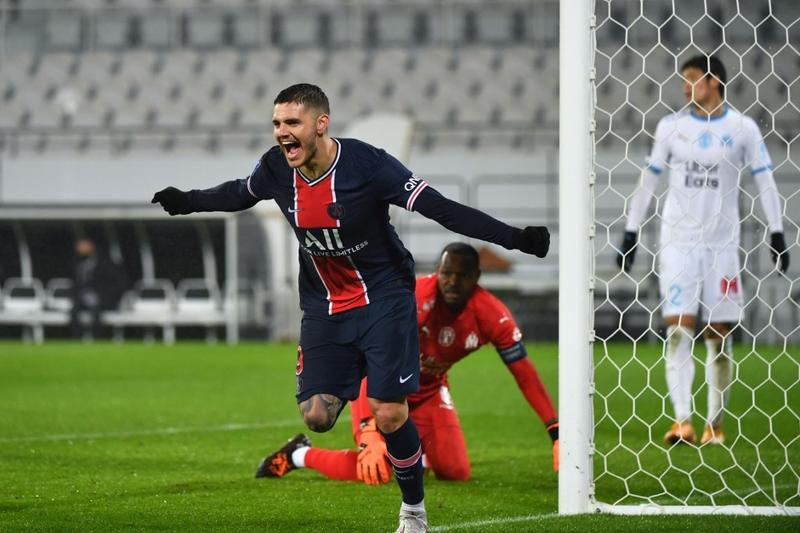 Mauro Icardi put PSG ahead in the 39th minute, sliding in from close range before Neymar, on his return from an ankle injury, added the second from the spot

The Argentine started his coaching career in 2009 with Spanish club Espanyol and it took him more than 500 games to finally win a trophy after having lost two finals with his former side Tottenham - in the 2015 League Cup and 2019 UEFA Champions League.

"After 10 days as a coach, three matches played and this final against our biggest rival, it's very important to win," said the 48-year-old, who replaced Germany's Thomas Tuchel to take charge of the Ligue 1 giants earlier this month.

"I want to thank the players and (PSG president) Nasser (Al-Khelaifi) for the opportunity," the former PSG defender and captain added. "But also Thomas Tuchel and his staff because we are here because they have won titles."

Icardi put PSG ahead in the 39th minute, sliding in from close range before Neymar, on his return from an ankle injury, added the second from the spot.

"This is only the beginning. We believe that with time and work, we can install our ideas and that the progress will be good because of the quality we have. We have little time to train but my players deserve this trophy, the recognition and they have adapted quickly to my requirements," Pochettino added.

The game was also PSG captain Marquinhos's 300th with the capital side, and he hailed Pochettino as "an exceptional coach" after the win.

"It's a pleasure to be on the pitch, to be able to give you all so that you can win matches and trophies. That's why I came to PSG," the Brazilian defender said. "There is a new coach with a new philosophy, it's not always easy to change during the season but Pochettino is an exceptional coach."

Marseille playmaker Dimitri Payet pulled one back in the 89th minute, and Florian Thauvin missed a late chance in injury-time as PSG held on to seal the victory.

"We played well despite the defeat," Thauvin said. "Unfortunately we conceded a penalty which hurt us.

Both sides will continue their league campaign this weekend, with PSG travelling to Angers and Marseille hosting Nimes.