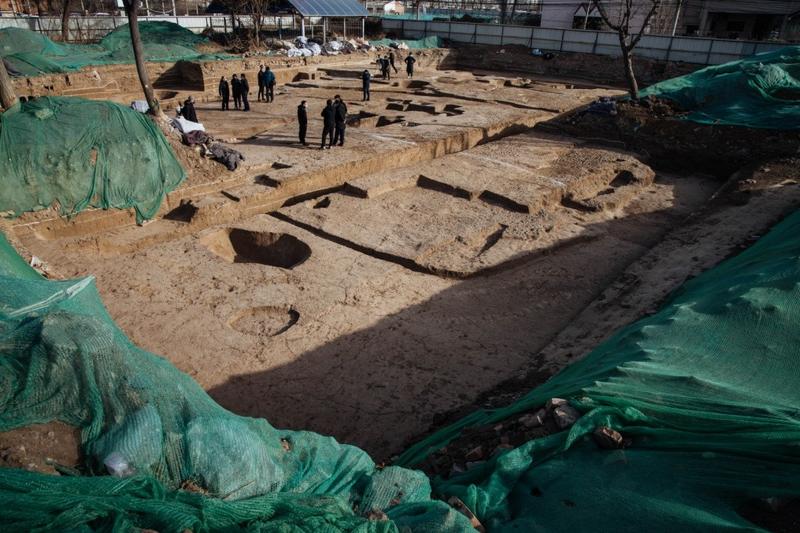 Key new archaeological findings in southwestern Beijing have unveiled the city's early days as the national capital, dating back some 900 years.

The first evidence of outer city wall ruins of Zhongdu (meaning "the central capital") of the Jin Dynasty (1115-1234) was unearthed during two years of archaeological research, the Beijing Municipal Administration of Cultural Heritage said on Wednesday.

An area of over 2,900 square meters of Zhongdu's city wall ruins was unearthed in 2019 and 2020, and a section of the western wall, which is 24 meters wide at its thickest, is the best preserved of the five

Five sections of the earthen wall's ruins were discovered in Beijing's Fengtai district, said Ding Lina of the Beijing Archaeological Research Institute, who is also lead archaeologist in charge of the project. The wall was originally on the western and southern side of the Jin Dynasty capital.

"The findings help us figure out the basic layout structure of Zhongdu's city walls," Ding said.

The Jin Dynasty was founded by the Jurchen people and once ruled over a vast territory in today's North China. In 1127, its powerful army seized Kaifeng, a city in present-day Henan province and then capital of the Song Dynasty (960-1279). The Jin army took two Song emperors as prisoners, marking the end of Northern Song period (960-1127).

Members of the Song royal family moved to Lin'an－today's Hangzhou, Zhejiang province－and a lengthy military standoff began between the Jin and Southern Song (1127-1279) dynasties. In 1153, the Jin Dynasty made Zhongdu its capital, and the city grew to be a prosperous metropolis.

The city then became the capital of a national dynasty for the first time.

"We don't have much to refer to," she said. "For example, we didn't know how the wall was built, so this archaeological excavation provided crucial evidence."

An area of over 2,900 square meters of Zhongdu's city wall ruins was unearthed in 2019 and 2020, and a section of the western wall, which is 24 meters wide at its thickest, is the best preserved of the five. It is near the Lize Financial Business District. Lize was also the historical name of a Zhongdu city gate, as historical records show.

The city wall was found to have been built mainly with rammed earth, though some outward protrusions were also covered in brick to enhance the fortifications, Ding said.

The city wall was found to have been built mainly with rammed earth, though some outward protrusions were also covered in brick to enhance the fortifications, Ding said

Though the unearthed part covers only a corner of the ancient city, details tell the story of its impressive construction.

A 66-meter-wide moat, 17 meters from the western wall, also was excavated, as were several roads in the city by the wall. Other important relics that were discovered include broken porcelain pieces, which were fired in the Ding and Jun kilns, the top-tier ceramic factories of the time.

Still, Ding, the archaeologist, said that follow-up architectural studies are needed to estimate the height of the walls and their appearance.

Some findings may help fill voids in historical records, and some have verified accounts in written documents.

Historical records show that Zhongdu was expanded from an existing city from the Tang (618-907) and Liao (916-1125) dynasties. The discovery of ancient tombs from the two dynasties beneath the Jin Dynasty city wall ruins matched those records.

"In ancient China, graveyards were located outside the city," Ding said. "As Zhongdu expanded, these places were included in the urban area."

With the army of Mongol ruler Genghis Khan posing a threat to the north, the capital of the Jin Dynasty was moved from Zhongdu to Kaifeng in 1214. Zhongdu fell victim to war and was destroyed the next year. Nevertheless, when Genghis Khan's grandson Kublai Khan founded the Yuan Dynasty (1271-1368), he chose what is present-day Beijing as the capital by constructing a new city known as Dadu.

Since the Yuan Dynasty, Beijing has continued to be China's national capital with the exception of relatively short periods of decades.

"Consequently, the Zhongdu site is a milestone for our studies of Beijing's history as the capital," said Zhang Zhonghua, deputy director of the Beijing Archaeological Research Institute.

Zhang added it also has a key role in comparative studies of Chinese capital cities.

The Jurchen rulers of the Jin Dynasty made efforts to learn from the highly developed Song culture, so the design of Zhongdu mimicked Kaifeng. But given that the Song capital city was frequently flooded by the Yellow River and would be difficult to excavate, Zhongdu's ruins offer an alternative for research related to the ancient Song city in Henan province, Zhang said.

According to Fu Ran, an official in charge of cultural heritage protection with the Fengtai district government, a park featuring the ruins of Zhongdu's city walls is also planned to better protect the site and display archaeological discoveries for the public to see.