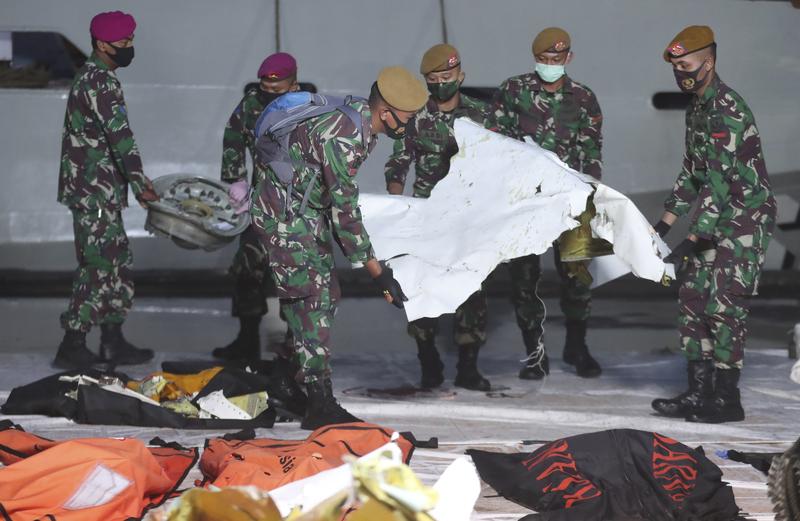 The cause of the crash isn’t yet known -- divers are still trying to retrieve the cockpit voice recorder from the wreckage in the Java Sea. The flight-data recorder was recovered Tuesday. Rescue workers have been bringing in bags of human remains for identification, along with parts of the Boeing 737-500 plane, which was nearly 27 years old.

“This is a preventive action on similar types of aircraft that operate in Indonesia,” Adita Irawati, a spokeswoman for the transport ministry, wrote in a text message. “It is a common practice in other countries.”

Boeing 737-300, 400 and 500 jets all fall under the classic series. Indonesian airlines that fly those include Citilink, Nam Air, Deraya Air Taxi, Xpress Air, Jayawijaya Dirgantara, My Indo Airlines, Trigana Air and Tri-MG Intra Asia Airlines, according to data from planespotters.net.

Sriwijaya Flight 182 plunged into the sea shortly after taking off from Jakarta at 2:36 p.m. on Jan. 9. The aircraft had returned to service only on Dec 20, after spending nine months in storage due to the downturn caused by the coronavirus pandemic.

Boeing 737-300, 400 and 500 jets all fall under the classic series. Indonesian airlines that fly those include Citilink, Nam Air, Deraya Air Taxi, Xpress Air, Jayawijaya Dirgantara, My Indo Airlines, Trigana Air and Tri-MG Intra Asia Airlines, according to data from planespotters.net

The plane was traveling to Pontianak on the island of Borneo. Four minutes after takeoff, air-traffic controllers noticed it wasn’t on its assigned track and radioed the crew. Within seconds, the aircraft disappeared from radar.

The retrieved flight-data recorder is “in relatively good shape,” Indonesia’s National Transportation Safety Committee Chairman Soerjanto Tjahjono said Wednesday. The box is being dried out and the contents should be downloaded within five days, he said.

The US National Transportation Safety Board is sending a team of technical experts to assist the Indonesian government’s probe into the crash. They’ll be joined by representatives of Boeing, engine maker General Electric Co. and the US Federal Aviation Administration. Air-accident probes are typically run by the country in which the crash occurred, but investigators from the nation where the plane and its components were built can participate. Indonesia granted waivers allowing them to enter the country despite its coronavirus travel ban, a person familiar with the matter said Tuesday.

Representatives from the NTSC and Sriwijaya Air met with victims’ families for the first time on Wednesday to provide updates on the investigation and notify them that a preliminary report will be available 30 days after the date of the crash, the airline said in an emailed statement.

The COVID-19 pandemic has forced airlines globally to park fleets due to a lack of demand and border restrictions. Aircraft require specific maintenance work during storage and when they are brought back into service to ensure that engines function properly, fuel isn’t contaminated and all systems work.

Weather has been a factor in several crashes in Indonesia, a fast-growing market with one of the world’s worst safety records. Sriwijaya Air Flight 182 had been delayed for 56 minutes as heavy rain hit the Indonesian capital. The plane plunged more than 10,000 feet shortly after takeoff.

Other major crashes in the Java Sea in recent years include a Lion Air Boeing 737 Max in October 2018 and an AirAsia Group Bhd. Airbus SE jet in December 2014. Both hurtled into the ocean, claiming 351 lives.