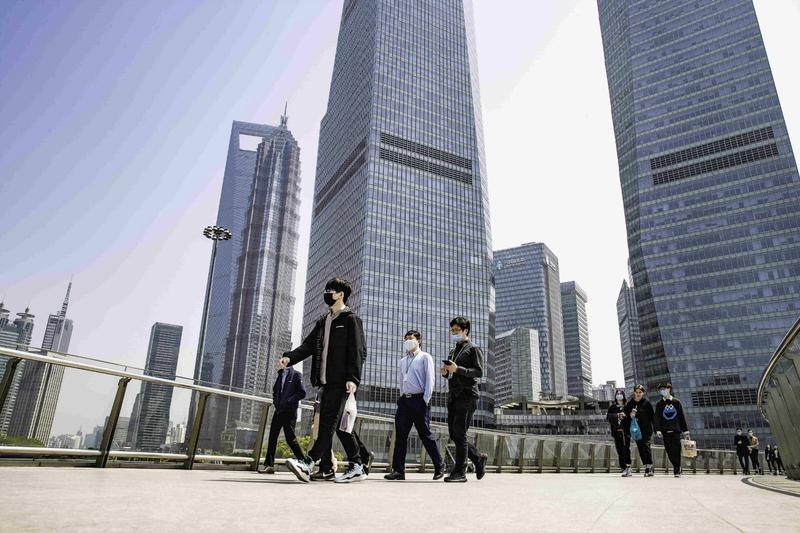 Many global conglomerates have established their headquarters in the Lujiazui area of Shanghai. (WU KAI / FOR CHINA DAILY)

As COVID-19 continues to take its toll on global health and economies, most multinational corporations operating in China are bucking a trend seen in many parts of the world.

These enterprises are shunning moves toward lower investment, the erosion of human capital and the fragmentation of trade and supply linkages.

Such businesses view the country as a "too-big-to-miss" market bolstering global growth and also as fertile soil to foster indigenous innovation to keep the nation and themselves afloat.

Effective control of the contagion, clear guidance for economic development and the unwavering resolve to further open up the market are among the factors reassuring overseas companies aiming to consolidate their presence in China through further investment and localized efforts.

While the decision by the United States conglomerate Honeywell to register a wholly-owned subsidiary in Wuhan, capital of Hubei province, last year took many observers by surprise, Scott Zhang, president of the company in China, had no doubts about the move.

"China was the only major economy in the world to show positive growth in 2020 and Honeywell's business has benefited from that momentum," said Zhang, whose company operates in fields ranging from industrial solutions to aviation.

"We are rosy about China's economic growth prospects and hope to be a key partner in its economic development," he said.

Zhang said industrial software technologies, in particular, are poised to take a significant step in helping customers adapt to changes in an era where working remotely becomes the new normal.

Such optimism derives not from intuition, but from strong backing. The International Monetary Fund predicts that China's economy expanded by 1.9 percent last year. This is an indication that it is likely to be the only major economy to enjoy positive growth in a year during which the pandemic emerged.

Cosmetics giant L'Oreal is among companies attributing their notable performances in China last year to their slice of the revenue pie, and they see the country as the decisive factor in securing growth globally.

As of September, L'Oreal, the world's largest maker of skincare and makeup products, had seen 20.8 percent year-on-year growth in China, outstripping its pace globally by a wide margin.

Fabrice Megarbane, president and CEO of L'Oreal China, said, "The strong performance of L'Oreal China helped our group return to growth in the third quarter and strengthened our confidence in the Chinese market and our overall performance for the year."

Business leaders said weathering the COVID-19 storm would not have been possible without prompt and decisive support from all levels of the Chinese government.

They pointed to a range of decisions that were made, including effective procedures implemented to track and deal with infections and measures taken to stabilize employment, trade and investment.

Holly Lei, China president of German chemicals company Covestro, which resumed manufacturing in the early stages of the contagion in February, said, "We greatly appreciate the efforts China has made to revitalize business activities and aid enterprises－for example, by sending masks to us at the beginning of the outbreak."

She also referred to a number of perks granted by the authorities, including preferential natural gas prices as a non-residential user, national tax relief measures to help trim costs, and a series of stimulus packages to help the company's customers on the road to recovery.

"As a result, the deep V-shaped recovery here in China is not too surprising to us," Lei said.

George Xu, CEO of Airbus China, said the aviation industry had inevitably been heavily affected by social distancing and curbs on cross-border travel. However, the measures taken by China to combat the pandemic ensured a stable and healthy rebound that was not only noteworthy globally but had helped his company recover.

"Since the National Day holiday, air passenger traffic in the domestic market has exceeded the level seen at the same time last year, and it is the only civil aviation market that has witnessed positive growth," he said.

Xu said the industry's prosperity is closely related to protecting people's livelihoods, the stability of supply chains, employment, finance and foreign trade. All these factors are in line with the government's directive to ensure six priorities and stability in six areas to guide the country's next phase of growth.

He said China's economic progress, based on development cycles and the global political and economic situation, "is bound to continue to promote a comprehensive, multi-level and diversified pattern of open cooperation… and is precisely what helps to confirm Airbus' development strategy in China."

With the world overshadowed by the pandemic, geopolitical frictions and recessions, foreign businesses said they were heartened by the clear policy guidance in China.

Amid the many directives issued during last month's Central Economic Work Conference, which charted the Chinese economy's course for the coming year, the meeting reiterated the need to maintain policy support for economic recovery, avoid a sudden shift in policy, and keep economic growth within a reasonable range.

Covestro, which has benefited from China's pursuit of innovation and higher-quality growth, has upgraded its regional headquarters in Pudong New Area, Shanghai, to oversee functions such as investment, management, and research and development.

Leon Wang, executive vice-president of AstraZeneca and head of AstraZeneca China, said, "The Chinese government is committed to healthcare reform, which presents our company with not only a significant commercial opportunity, but the chance to deliver high-quality drugs and innovative solutions to more patients who need them."

In line with the new development pattern, the company is expanding its China headquarters in Shanghai to include R&D functions at an early stage and to contribute to the development of new drugs globally. It is also looking to set up regional headquarters across the country to incubate healthcare innovation in a more local context.

For example, it has earmarked Chengdu, capital of Sichuan province, as a site for innovative solutions combining Chinese and Western medicine. Wang said such a move is evidence of the company's long-term commitment to China.

Zhu Wei, China chairman of global consultancy Accenture, said that thanks to the unprecedented swift action taken by the nation to mitigate the impact of COVID-19, digital business models and new technologies have played a role in safeguarding people's livelihoods－and this is where Accenture's expertise kicks in.

The consultancy, which advises and supports companies on digitalization transformation, forecasts that China will see US$1.9 trillion in new economic value by 2030 through breaking growth limits with new technologies and unfettered innovation.

"Accenture is thus in a position to bring continuous innovation to help Chinese clients harness the power of digital, improve their performance and create lasting value across their enterprises."

"We believe that a golden decade for China's semiconductor industry has just begun," said Gabor, whose company's life science, healthcare and performance materials businesses in China all contributed to growth last year.

"Dual circulation will certainly reinforce the economic recovery and stimulate the domestic market in areas driven by high-tech. We will be accelerating our investments in China, especially in electronics."

The demand-side management officially put forward for China's economic road map has grabbed the attention of companies such as TE Connectivity, which manufactures connectors and sensors.

Reggie Lai, the company's vice-president and general manager in China, said premium industrial products, such as new energy vehicles and smart home appliances, provide a strong foundation for the country to boost domestic market expansion, but are also huge opportunities for companies, including TE.

"For instance, as the electronic vehicle industry continues to move from combustion engines to more sophisticated EV and autonomous driving technology, the value of TE's content in each car increases proportionally," he said.

Consumption upgrading is also changing the behavior of Chinese customers looking for good service and experience. As a result, the company has witnessed a surge in demand for telecommunication, remote education and online shopping in China, accelerating the construction of data centers and 5G networks.

Megarbane, from L'Oreal, said companies such as his are using the "marriage" of consumption and technology to better pamper customers with goods aimed at pursuing "a beautiful life".

The company is launching an initiative dubbed HUGE, through which global new product debuts, research and innovation center expansion, strengthened online-to-offline retail, and beauty-tech transformation are being advanced to navigate the Chinese market and serve local consumers.

Megarbane said better livelihoods and the stable employment rate in China, along with rising incomes, the increased willingness and power to spend, and burgeoning aspirations for a better life create huge market demand.

China's market size, diversity and pace of innovation have long served as launchpads for new business trials. These factors have spurred multinational confectionery company Mondelez International to roll out smart operations across the supply chain, from production to retail, over the next few years.

Joost Vlaanderen, president of Mondelez China, said, "This will enable us to better serve the Chinese and international markets, seamlessly align with the needs of e-commerce for flexible and personalized product packaging and transportation, and to continue providing diversified and high-quality products for Chinese consumers.

"Our 'local-first' strategy enables us to get closer to local consumers with a faster response to their new needs for snacks. We will also collaborate with our partners to unleash the full potential of the domestic market."

Business representatives also referred to other incentives－from China's carbon neutrality goal to pledges to protect intellectual property rights－as reasons to remain optimistic. However, the greatest emphasis is placed on the country's commitment to further opening-up.

Will Song, global senior vice-president and China chairman of Johnson & Johnson, said: "We are encouraged to see that the Chinese government continues to promote an open, fair, transparent and predictable investment environment. It not only boosts the confidence of foreign companies like Johnson &Johnson, but will also help economic recovery and growth."

Xu, from Airbus, said, "We always maintain an open mind for any potential cooperation, strive to establish a more stable and long-term partnership with China, and aim to be a leader in Sino-European Union economic and trade cooperation."

Covestro's Lei said: "The dual circulation system does not mean that China is closing its doors or turning inward. We believe China will continue to build an open economy with higher standards and better quality, thus providing a stronger driving force for global economic development as well as for multinational companies."