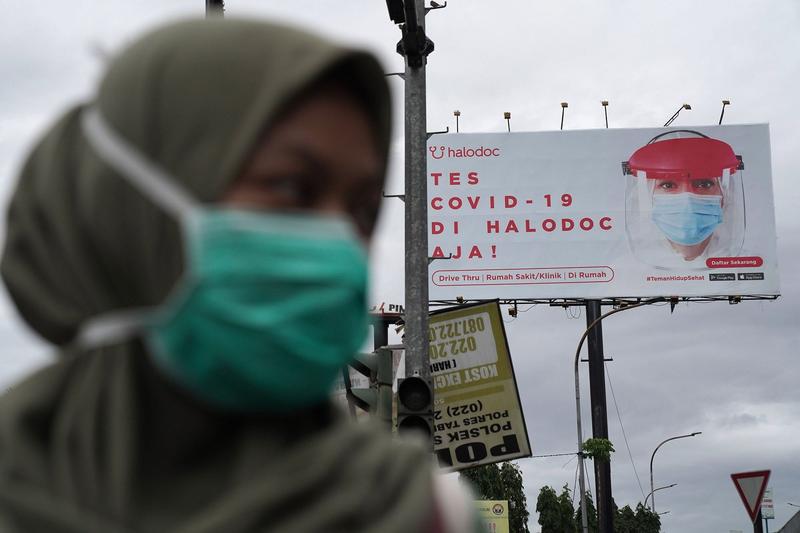 A pedestrian wearing a protective face mask walks past an advertisement for coronavirus tests in Bandung, West Java, Indonesia on Dec 10, 2020. (PHOTO / BLOOMBERG)

SYDNEY / NEW DELHI / BAGHDAD / JERUSALEM / TOKYO / YANGON / WELLINGTON / CAIRO / SINGAPORE / ANKARA / ULAN BATOR / MANILA / BANGKOK - Indonesia is planning to start vaccinating its population against COVID-19 this month and is seeking to deliver shots to 181.5 million people by March 2022, according to the Ministry of Health.

The initial phase of inoculations will target 1.3 million health workers and 17.4 million public employees nationwide during the first quarter of 2021, Siti Nadia Tarmizi, the ministry’s vaccination spokeswoman, said at a briefing on Sunday.

The health ministry is seeking to begin vaccinations no later than the third week of January following official approval from the food and drug regulator, Tarmizi said. Indonesia received its first batch of COVID-19 vaccine from China’s Sinovac Biotech Ltd last month and Kompas newspaper reported shots started being distributed on Sunday.

The New South Wales outbreak, which began around mid-December at Sydney’s Northern Beaches, now totals 148. There are also smaller clusters in Sydney’s west and south, which authorities fear could rise in coming days.

Victoria’s three cases on Sunday were all linked to the same Melbourne restaurant, though the source of the infection is still under investigation.

Victoria, which now has more than 30 active cases, has made masks mandatory across the state while limiting gatherings and shutting its border to NSW. 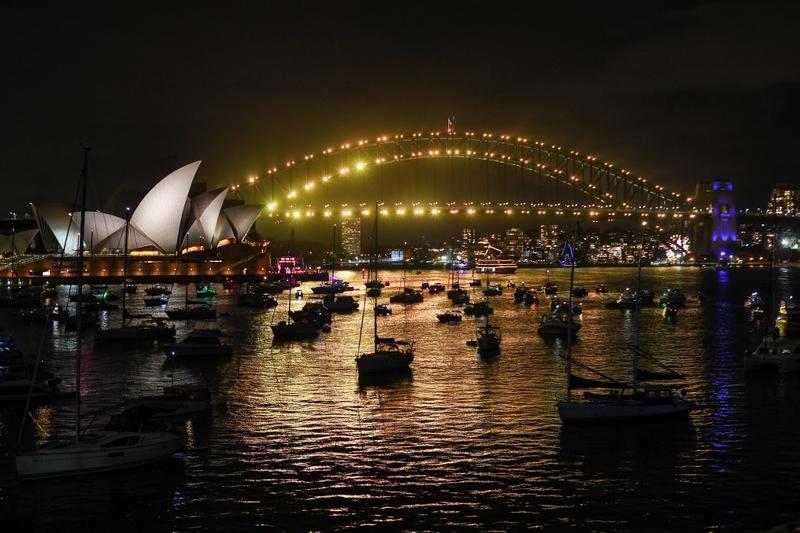 A general view shows the Opera House and Harbour Bridge hours before a fireworks show to celebrate the New Year in Sydney on Dec 31, 2020. (SAEED KHAN / AFP)

There are still 247,220 active cases in the country, while 9,927,310 people have been discharged from hospitals after medical treatment.

The ministry also reported five new deaths, raising the death toll from the infectious virus to 12,829, and 1,929 more recovered cases, bringing the total recoveries to 541,746.

The death toll from coronavirus rose to 3,391 after seven new fatalities were added, while the number of recoveries rose to 382,176 with 462 new ones. 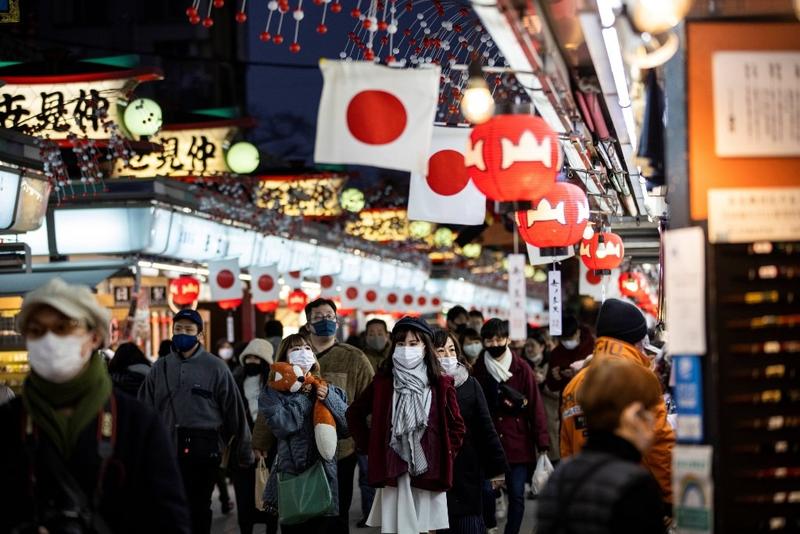 People wearing face masks to help prevent the spread of the COVID-19 coronavirus walk along Sensoji temple shopping street in the Asakusa district of Tokyo on Jan 2, 2021. (BEHROUZ MEHRI / AFP)

The Japanese government will consider whether to declare another state of emergency over the COVID-19 pandemic, Yasutoshi Nishimura, the minister in charge of Japan's COVID-19 response, said Saturday.

Nishimura's remarks followed a request from the governors of Tokyo and three neighboring prefectures with a local resurgence of infections that puts a mounting pressure on the medical system.

"We agreed that we are in a severe situation that warrants us considering the declaration of a state of emergency," Nishimura said at a press conference after a meeting with Tokyo Governor Yuriko Koike and the leaders of the Saitama, Chiba and Kanagawa prefectural governments.

Tokyo reported another 814 confirmed cases of COVID-19 on Saturday amid a rapid increase, with its cumulative total rising to 61,774, according to the metropolitan government. On the same day, 3,059 new cases were reported by local authorities nationwide.

Twenty-one more locally transmitted COVID-19 cases were recorded in Mongolia in the past 24 hours, bringing the national caseload to 1,263, the country's National Center for Communicable Diseases (NCCD) said Sunday.

"A total of 5,807 tests for COVID-19 were conducted across the country yesterday and 21 of them were positive. The latest cases were detected in the capital city Ulan Bator," said Amarjargal Ambaselmaa, head of the NCCD's Surveillance Department, at a press conference.

Myanmar recorded 574 new confirmed cases of COVID-19 and 14 more deaths from the coronavirus epidemic in the past 24 hours, according to a release from the Health Ministry on Saturday.

The latest figures raised the Asian country's total tally of COVID-19 infections to 125,616 with 2,711 deaths.

A total of 19 new COVID-19 cases were reported at the New Zealand border for the last three days, as the country announcing tightened border restrictions on Sunday.

The new cases were all detected in managed isolation while no new case was found in the community, said the Ministry of Health in a statement on Sunday.

The ministry's last media statement on the COVID-19 case numbers was on Thursday. 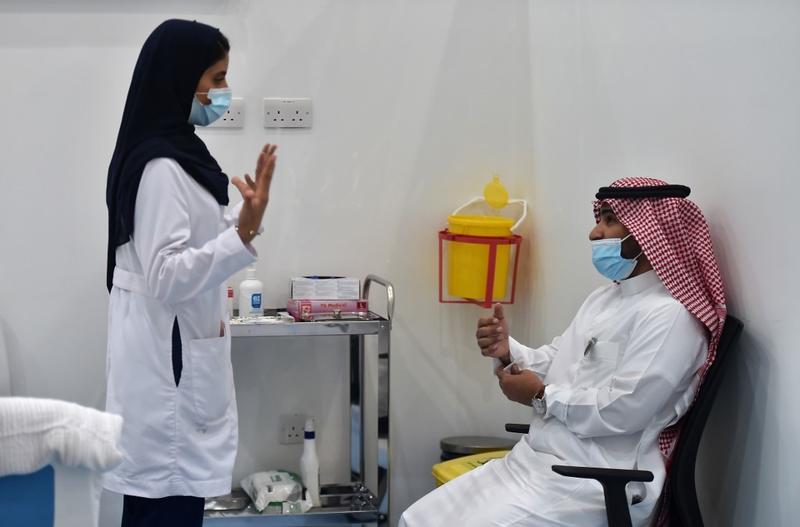 A nurse speaks to a man before administering the Pfizer-BioNTech COVID-19 coronavirus vaccine (Tozinameran), as part of a vaccination campaign by the Saudi health ministry, in Saudi Arabia's capital Riyadh on Dec 17, 2020. (FAYEZ NURELDINE / AFP)

Saudi Arabia said that entry to the kingdom by sea, land and air will be resumed starting Sunday after a ban that lasted two weeks amid fears of a new coronavirus variant, the state news agency reported on Sunday.

A ministry of interior official said that some restrictions including asking people coming from countries where the new variant spread such as the UK, South Africa and any others, to stay at least 14 days out of these countries before entering the kingdom.

Singapore strengthened regulations for workers in the maritime industry after two more COVID-19 cases were found in the last two days of December.

Shore-based personnel in the maritime sector who plan to go on board ships will need to take COVID-19 pre-departure test by Jan 8, according to a joint statement from the Maritime Port Authority of Singapore, Singapore Economic Development Board, Enterprise Singapore and the Ministry of Health. This will apply to more than 20,000 workers, the statement said.

Routine testing will also be made more frequent, with workers now to be tested every seven days instead of every 14. Those who don’t follow these rules won’t be allowed to board ships for work.

“Individuals and companies which are found to have violated these measures will be taken to task,” according to the statement. “Agencies will also review the need to enhance PPE and infection control measures in the sector.”

A marine surveyor and a harbor pilot tested positive for coronavirus on Dec 30 and 31, respectively, prompting the authorities to take steps to introduce the additional tightening measures. This followed a marine service engineer testing positive on Nov 26.

Singapore's Ministry of Health (MOH) reported 33 new COVID-19 cases on Saturday, bringing the total confirmed cases in the country to 58,662. 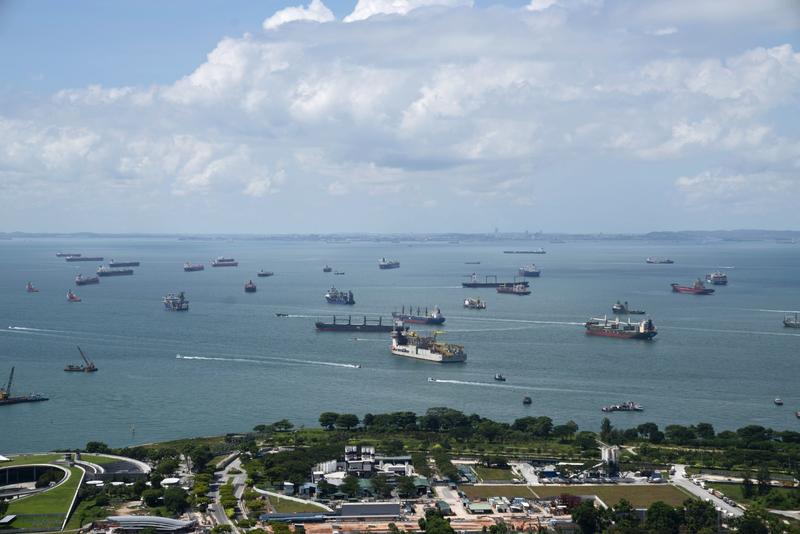 In this July 6, 2020 photo, ships and tankers sit off the coast of Singapore. (WEI LENG TAY / BLOOMBERG)

Thailand on Sunday confirmed 315 new cases of COVID-19, mostly domestic infections, according to the Center for the COVID-19 Situation Administration (CCSA).

The new cases included 294 local infections while 21 others were those in quarantine upon arrival from abroad, CCSA spokesman Taweesin Visanuyothin told a daily news briefing.

That brought the number of Thailand's total confirmed cases to 7,694, 5,650 of which were local infections while 2,044 others were those in quarantine, Taweesin said.

The Department of Health (DOH) of the Philippines reported 891 new confirmed COVID-19 cases on Sunday, bringing the total number in the country to 477,807.

In a statement, the DOH said the low daily tally of cases is "due to a decrease in the number of patients seen in COVID-19 laboratories during the New Year."

"The DOH reminds the public to be cautious in interpreting these numbers as an increase in cases in the coming weeks is still possible," the statement read.

The DOH said in the bulletin that the death toll climbed to 9,257 after four more patients died from the viral disease. It added 8,316 more patients recovered, raising the total number of recoveries to 448,258.

Turkey reported on Saturday 11,180 COVID-19 cases, as the total number of positive cases in the country reached 2,232,035, its health ministry announced.

The rate of pneumonia in COVID-19 patients stands at 3.8 percent and the number of seriously ill patients is 3,764 in the country, said the ministry.