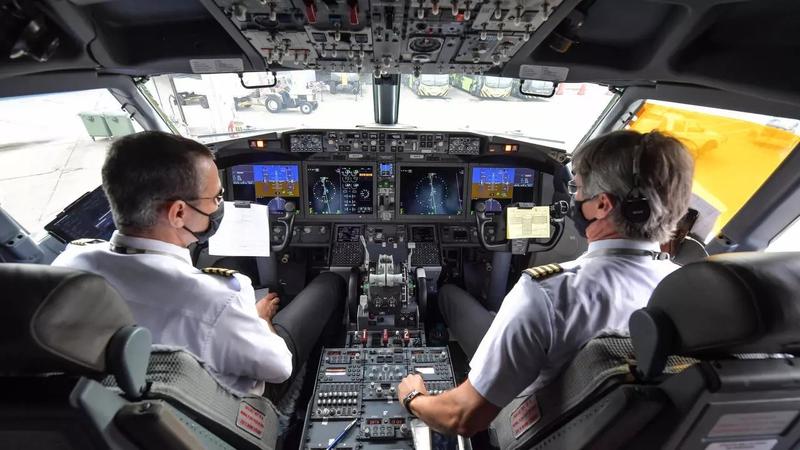 Pilots are pictured in the cockpit of a Boeing 737 MAX aircraft operated by low-cost airline Gol as it sits on the tarmac before take off at Guarulhos International Airport, near Sao Paulo on Dec 9, 2020, as the 737 MAX returns into use more than 20 months after it was grounded following two deadly crashes. (NELSON ALMEIDA / AFP)

A Boeing 737 Max carried paying passengers on a US flight on Tuesday for the first time since March 2019, when the plane was grounded worldwide after two deadly crashes highlighted safety problems.

American Airlines Flight 718 landed ahead of schedule shortly after 1 pm Eastern Time at New York's LaGuardia Airport after taking off from Miami around 10:40 am ET.

The airline is the first US carrier to return Boeing's jetliner to passenger use after the Federal Aviation Administration, or FAA, in November cleared the 737 Max to fly. Brazil and Mexico put the jet back into service this month.

"This aircraft is ready to go," American Airlines President Robert Isom said at a media briefing in Miami before the flight. The airline is confident in the safety of the aircraft, he added.

The Max's return came when the COVID-19 pandemic has pushed carriers into their worst crisis, with airlines parking hundreds of jets as US passenger demand hovers around 30 percent of 2019 levels.

With the grounding of the Max lifted, Chicago-based Boeing can resume deliveries of the jetliner, bringing in much-needed cash.

Southwest Airlines said in December it plans to fly passengers on the 737 Max again in March. The carrier had the largest active fleet of such aircraft before the pandemic because of an order for nearly 300 of the Max 8 and Max 9 variants. Now, only 35 will arrive at the airline in 2021.

United Airlines has the aircraft in its schedule for February. Alaska Airlines hasn't yet received its first 737 Max but plans to take its first delivery in January and start service in March on West Coast routes.

It's offering reluctant passengers several other options, such as rebooking on the next flight without fees, changing their itineraries to other airports or canceling their trips in exchange for credit toward future travel

For the next several days, American will use the aircraft for two flights each day, providing round-trip service between Miami and New York City. Starting next week, more aircraft will gradually be added to the schedule. American says it will build up to as many as 38 departures each day through mid-February. After that date, it plans to use the 737 Max for up to 91 daily departures.

American and Boeing have sought to reassure the public over the plane's safety. A CNBC reporter said the wife of the flight captain and the first officer's mother were both on board the flight of around 1,900 kilometers to New York.

American says it will accommodate any passengers who are worried about flying on the aircraft.

"If a customer doesn't want to fly on a 737 Max aircraft, they won't have to," the airline says. It's offering reluctant passengers several other options, such as rebooking on the next flight without fees, changing their itineraries to other airports or canceling their trips in exchange for credit toward future travel.

The 737 Max was grounded for some 20 months, after crashes in Indonesia and Ethiopia killed a total of 346 people. Investigators found that the pilots of both jets were unable to control them shortly after takeoff, as a flawed flight-control system forced the nose of the 737 Max down toward the ground.

The grounding was lifted by the FAA after Boeing agreed to software upgrades and new safeguards on a key flight-control system linked to both fatal crashes.