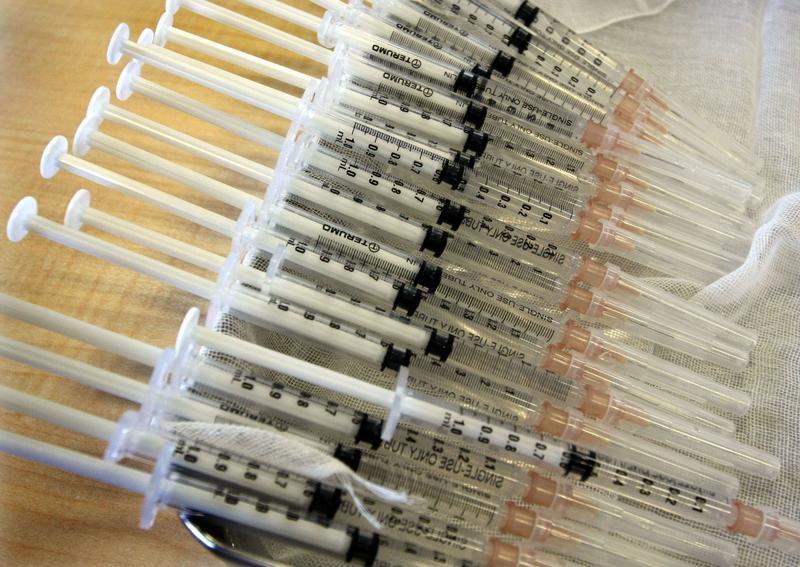 In this Oct 19, 2009 photo, doses of the swine flu (H1N1) vaccine are prepared at the Tsukuba Medical Center hospital in Tsukuba City, Japan. (TOSHIYUKI AIZAWA / BLOOMBERG)

With agreements to secure more coronavirus vaccines than it needs and legislation to distribute it for free, Japan may seem to have its inoculation plans in place. Yet a tense public history with vaccines and a cautious approval process has some concerned over how quickly the country can return to normal.

Ironically, Japan’s relative success in handling the pandemic means an urgent rollout of the shot is less of a priority. The country has avoided a second state of emergency, even as cases have increased to record levels

Japan has one of the lowest rates of vaccine confidence in the world, according to a Lancet study, which found that fewer than 30 percent of people strongly agreed that vaccines were safe, important and effective, compared with at least 50 percent of Americans. A recent poll by Japanese public broadcaster NHK found 36 percent said they didn’t want to take a COVID-19 vaccine.

The government now faces a tricky balancing act: Trying to move quickly to approve the jabs in order to restore the economy to full health, while avoiding creating the impression of a rush-job -- which might help turn an already-skeptical public off getting inoculated.

ALSO READ: As Japan moves to revive its countryside, pandemic chases many from cities

“Japan is very cautious about vaccines, because historically there have been issues about potential side effects,” said Haruka Sakamoto, a public health researcher at the University of Tokyo. “The government has been involved in several lawsuits related to the issue, which adds to their deep caution.”

The skeptical attitude pre-dates the more recent Western “anti-vax” sentiment that has thrived on social media, with its roots instead in past vaccine-linked events and legal rulings that encouraged the government to take a passive stance on vaccination.

And ironically, Japan’s relative success in handling the pandemic means an urgent rollout of the shot is less of a priority. The country has avoided a second state of emergency, even as cases have increased to record levels.

As a result, Japan’s rollout is set to be slower than some other nations, which has led to frustration among those counting on vaccines to eradicate the virus. Only Pfizer Inc. has so far applied for local approval of its coronavirus shot, even as the UK and the US have both administered more than half a million doses, mostly to the elderly and health-care workers.

Local media have reported that vaccines will be rolled out in Japan from late February, when the government aims to inoculate about 10,000 frontline health-care workers. The ministry is then preparing to vaccinate general medical staff, after which it will be gradually administered to the wider population. Japan hasn’t stated when it aims to complete its vaccination program.

While figures such as US Vice President Mike Pence and President-elect Joe Biden have gotten the dose, and leaders such as Indonesian President Joko Widodo are volunteering to be the first to receive it in their countries, Japan’s Prime Minister Yoshihide Suga has said he will wait his turn.

Japan’s Health Minister Norihisa Tamura said Friday that he has asked relevant bodies to prioritize the review of Pfizer’s application, but didn’t give a timeline for approval. A health ministry spokesman also declined to comment on the reported timeline. 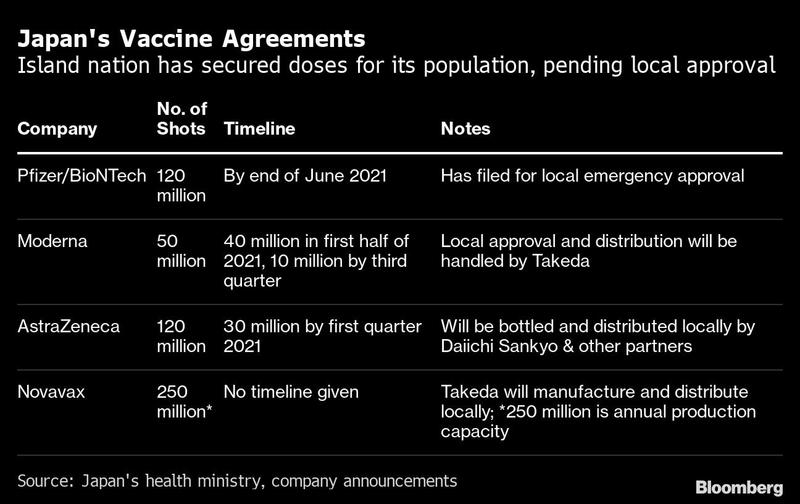 Japan’s modern vaccine unease has its roots in a measles, mumps and rubella inoculation that some suspected of leading to higher rates of aseptic meningitis in the early 1990s. Though no definitive link was established, the shots were discontinued, and to this day Japan doesn’t recommend a combined MMR shot.

Another catalyst was a 1992 court ruling that not only made the government responsible for any adverse reactions related to vaccines, but also stipulated that suspected side effects would be considered adverse events, said Tetsuo Nakayama, a professor at the Kitasato Institute for Life Sciences whose research focuses on vaccines. Two years later, the government revised a vaccination law, scrapping mandatory vaccinations.

These events helped send a message that inoculations should be taken at one’s own risk, and diluted the awareness of vaccination as a greater public benefit, said Mikihito Tanaka, a professor at Waseda University specializing in science communication.

“Japan has a strong health insurance scheme and an accessible medical system,” he said. “Compared to places like the US, that makes the incentive to gamble one’s health with a new vaccine very low.”

The handling of the human papillomavirus (HPV) vaccine also looms large in public memory. After media coverage on claims the vaccine’s side effects included severe headaches and seizures, the health ministry in 2013 withdrew its recommendation for the shot, which has proven safe and effective in preventing cervical cancer. While it remained available on request, the vaccination rate plummeted from 70 percent to less than 1 percent currently. That may have led to an additional 5,700 deaths, according to one study.

Japan’s drug approvals require clinical trials involving Japanese people, but an emergency authorization based on data from other countries is allowed. Vaccines for the 2009 H1N1 flu pandemic were given emergency approval after about three months review.

Still, the government will have to carefully manage how the public perceives a speedy approval process. The economic impact of the pandemic and the forthcoming Tokyo Olympics could prompt a faster approval, but also arouse suspicion over whether the shots have been thoroughly vetted.

How the public will perceive some typical side effects is also concerning, Nakayama said. Initial data from the vaccines show local pain in 80 percent of cases and fatigue and headaches in up to 50 percent, but “there has never been a vaccine in Japan that has caused reactions to these levels,” he said. Tanaka said he was particularly worried about the influence of variety news programs, known as “wide shows,” which serve as both news and entertainment and are hugely influential in shaping public opinion, which ultimately will decide the scale of the rollout.

“The final decision to receive the vaccine or not will be made by the people,” Health Minister Tamura noted on Friday.