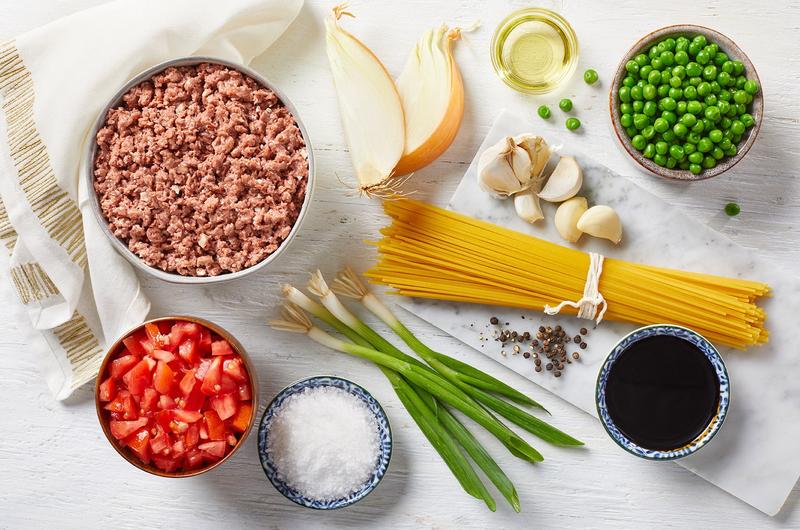 Beyond Beef, a product from US producer Beyond Meat, is used to make pasta, burgers and other dishes. (PHOTO PROVIDED TO CHINA DAILY)

At the end of this month, a plant-based meat substitute producer headquartered in the United States will complete construction of its first factory in China, which is due to start production early next year.

Beyond Meat is the first international plant-based meat substitute brand to open a factory in the country. Located in Jiaxing, Zhejiang province, it is one of the world's largest and most technologically advanced factories for such products.

I think the attraction of the Chinese market is that it has the speed of a rocket. For example, it takes a product from an international plant-based meat producer nine to 10 years to reach a major catering brand, but for Starfield, it only took about half a year for our first product to reach a major brand

The company plans to start building a second facility in Zhejiang next year.

As the name suggests, plant-based meat substitutes are made from plants and are especially designed to look, taste and cook like meat. These vegetable-based alternatives, which are growing in popularity, can be made into burgers, nuggets and sausages, for example.

Candy Chan, China general manager of Beyond Meat, said the company views Asia as a key region for long-term growth.

"With global meat consumption rising, there is a growing demand for more plant-based meat in China. This provides a unique opportunity for Beyond Meat, as Chinese consumers are becoming more conscious of the meat they eat," she said.

In addition to international plant-based meat alternative brands, more local startups have emerged this year, tapping into a growing market in China amid the rising consumer appetite for healthy and nutritious food.

From fast-food chains to Michelin-starred restaurants, and from supermarkets to online shopping platforms, more Chinese customers are being attracted to plant-based diets.

Chinese plant-based meat substitute brands are focusing more on customized and innovative products with a range of flavors.

According to a report published this month by research company MarketsandMarkets, the global plant-based meat market is estimated to be worth US$4.3 billion this year and is projected to reach US$8.3 billion by 2025.

Since entering the Chinese market in April, Beyond Meat has expanded nationwide. Coffee chain Starbucks added plant-based beef lasagna produced with Beyond Beef, a product made by Beyond Meat, to its menus, while two months later, fast-food chain KFC China launched trials of its first Beyond Beef burger.

In July, Beyond Meat launched its burgers in retail outlets, including Metro and Freshippo, while in November, Beyond Pork was released－a new product created especially for the Chinese market. 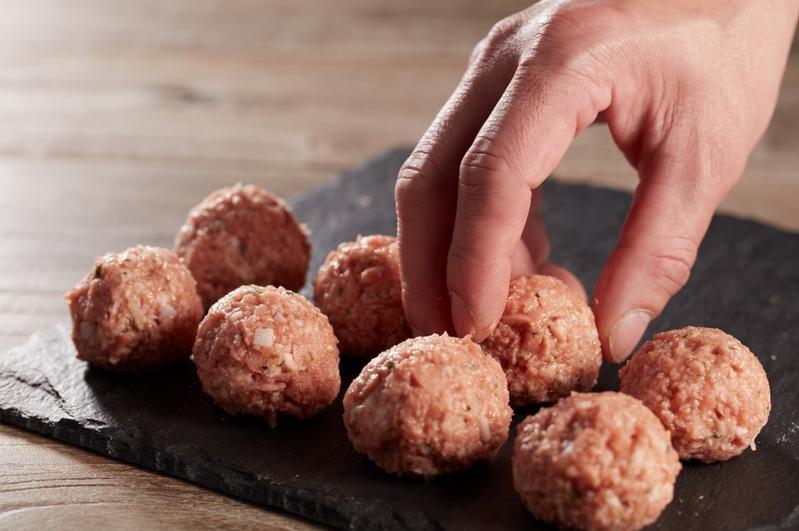 A customer samples meatballs made from OmniPork produced by OmniFoods, a meat substitute company in Hong Kong. (PHOTO PROVIDED TO CHINA DAILY)

According to Agricultural Outlook 2020, published by the Organization for Economic Cooperation and Development and the Food and Agriculture Organization of the UN, pork consumption in China last year reached 44.8 million metric tons, one of the highest rates globally.

"Beyond Pork is a global collaboration between Beyond Meat teams in Los Angeles and Shanghai, and we conducted multiple tests in China to get direct customer feedback to perfect the product."

Chan added that Beyond Pork delivers the meaty taste and texture craved by Chinese customers, but with about 50 percent less saturated and total fat than that found in typical minced pork. Ingredients such as rice and soybeans offer rich sources of protein, with 18.5 grams per 100-gram serving.

She said the company is targeting mainstream customers who love eating meat but are increasingly aware of associated health, climate, environmental and animal welfare concerns.

"Plant-based meats offer a host of environmental benefits, requiring less water and land to produce than meat derived from the farming of animals," Chan said.

According to a report published by Global Info Research in August, annual worldwide sales of luncheon meat are expected to reach US$3.9 billion by 2025, up from US$3.2 billion last year.

These achievements accompanied the launch of a plant-based sausage pizza by the restaurant to provide a meat-free choice for vegetarian customers. Details of the product were not placed on the formal menu, but were printed on a fryer hanging on a wall at the eatery. 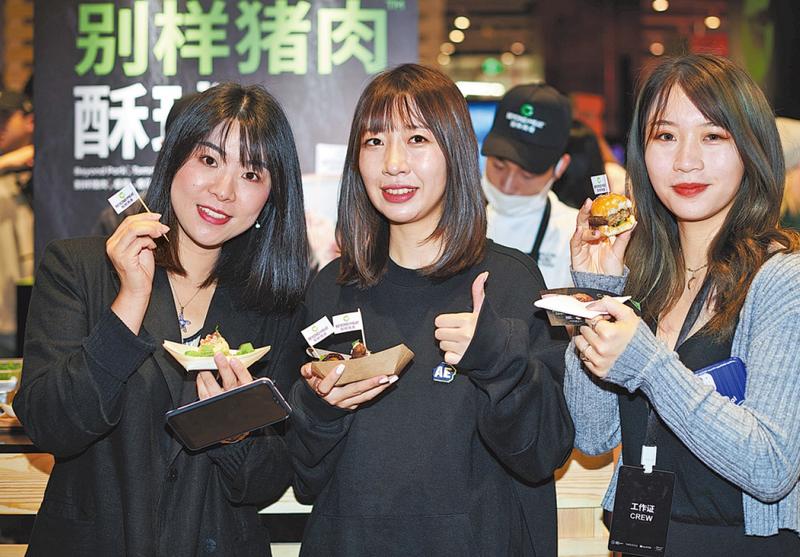 Beyond Meat holds a tasting event in Shanghai last month, at which a variety of foods made from plant-based meat was on offer. (PHOTO PROVIDED TO CHINA DAILY)

However, Nana Shinohara, co-founder of Bottega, said few diners order the new arrival "maybe because most customers who come to our restaurant are looking for (traditional) meat".

Shinohara said the restaurant team tried to find a vegan cheese to make a pizza, but such cheese is far too expensive.

After trying different plant-based meat, they decided to use minced pork from Z-Rou, a Chinese brand founded in Shanghai last year.

To date, Z-Rou only has two products－plant-based minced pork and ground pork. It uses soybean, konjac (a herb), coconut oil and shiitake mushrooms as its main ingredients.

Franklin Yao, the brand's founder, said minced pork is an iconic ingredient in Chinese cuisine, as it is used in many dishes, including mapo tofu, Sichuan noodles with peppery sauce and dumplings, as well as in Western cuisine such as pasta and pizza.

Netizen "Xiaoke'ai Liga" shared her experience of cooking minced Z-Rou pork on the social commerce platform Xiaohongshu, also known as Little Red Book. She said the flavor of beans could still be detected, so users should not be stingy in adding seasoning to the plant-based meat.

"To taste like traditional meat, it has to be fried, and I made fried meat steak with a black pepper flavor, which tasted good," she posted.

Plant-based meat products are more suitable for pan-frying or deep-frying at high temperatures to produce an authentic flavor, Li said.

"They are not that suitable for boiling, because the flavor of beans can be detected," he added.

Li said plant-based meat can be made into a range of creative dishes by chefs specializing in Chinese cuisine, which is rich in flavor that can mask the taste of beans.

China has a long history of making and eating meat substitutes made from soybeans, which are known as "vegetarian meat" in traditional Chinese cuisine.

While meat substitutes are nothing new to Chinese customers, plant-based meat startups are relatively new arrivals in the country－many of them founded only last year and collaborating with catering brands on a large scale this year.

Most entrepreneurs specializing in plant-based meat do not have their own facilities and are collaborating with traditional vegetarian meat factories.

According to Beijing Daily, the restaurant's purchasing costs for Zhen Meat's products are about the same as those for regular frozen beef. They are also three to four times lower than those charged by international brands Beyond Meat and Impossible Foods.

Customized and innovative products are the highlight for Chinese plant-based meat startups. 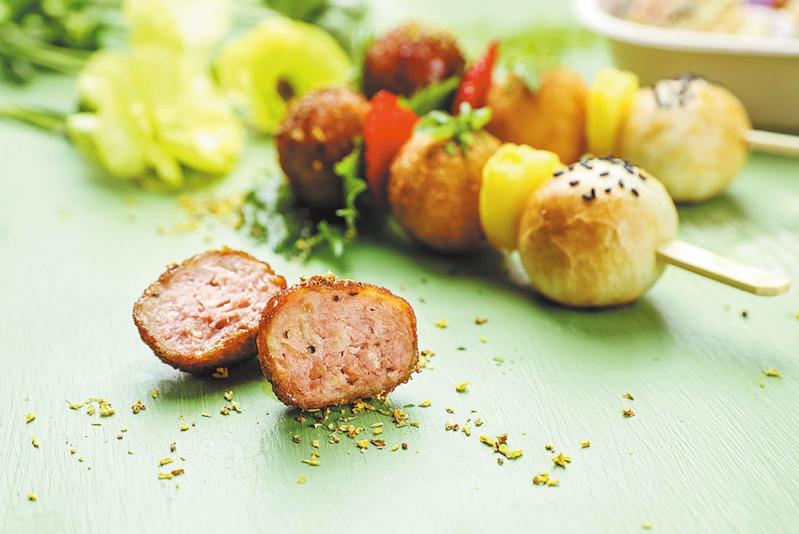 Tomacado, a restaurant chain in Beijing, makes meatballs in three flavors using plantbased meat and pairs them with strawberries and pineapples. (PHOTO PROVIDED TO CHINA DAILY)

Starfield, a Chinese company producing such meat in Shenzhen, Guangdong province, is popular for its customized items made in collaboration with restaurants featuring different styles of cuisine.

Starfield's co-founder Liu Shuman said that on the first five days, more than 100,000 of the burgers were sold.

Liu used to run a WeChat account to popularize knowledge and information about vegetarian diets.

She also ran a vegetarian restaurant in Dali, Yunan province, in 2017, but the business failed to attract enough diners.

"I think that in running a restaurant, I failed to fulfill my goal of making a large social impact on vegetarian diets," Liu said.

"However, when I learned about plant-based meat, I realized this could provide an opportunity to start changing people's diets."

Liu joined Starfield in October last year, and the first product was launched later that month.

She said Starfield's research and development department comprises more than 30 experts, including scientists specializing in vegetable protein and flavors, senior food engineers and chefs devoted to Western and Chinese cuisine.

"One of our aims is to make plant-based meat more delicious," she said.

"We use molecular sensory technology to imitate the flavor of chicken or beef," she said, adding that the main ingredients of the meat include soybeans, coconut oil, red beets and wheat.

Liu feels that the development of plant-based meat products is still in its infancy and that there is plenty of room to improve products currently on the market.

She believes there are two research and development goals for such products. One is to imitate a certain type of meat, while the other is to create products with a more authentic meat-like experience for customers.

Starfield has attracted three rounds of financing within a year, receiving more than 100 million yuan in one of them during September. According to Liu, the company is also building its own production factory.

"I think the attraction of the Chinese market is that it has the speed of a rocket. For example, it takes a product from an international plant-based meat producer nine to 10 years to reach a major catering brand, but for Starfield, it only took about half a year for our first product to reach a major brand," she said.

Starfield products are sold in more than 4,000 restaurants in China, and the company is aiming to collaborate with over 90 percent of all major catering brands by 2023.

"The potential of the Chinese market is huge and we have already made some inroads to vegetarian diets. We are not obsessed with vegan or vegetarian, but aim to provide the public with a meatless choice," Liu said.

Starfield is working mostly with restaurants. However, Liu said that when customers start to notice plant-based meat is on the menu and want to try to cook it at home or buy some ready-to-eat products, then it will be time to enter the retail market.

According to Kong Jie, who owns Tomacado, a restaurant chain in Beijing, the pandemic has reminded people of the importance of sustainable development.

With this in mind, on March 12, her team decided to introduce plant-based meatballs to the menu to mark Arbor Day, urging diners to eat less meat to help reduce carbon emissions. The meatballs are produced in collaboration with Starfield.

"We launched the meatballs in three flavors and paired them with strawberry and pineapple to represent the spring, with the aim of bringing more joy and hope to our customers," Kong said.

She added that the meatballs have been relatively popular, with nearly half the customers ordering them on launch day.

"Our customers are mostly female office workers, who are willing to embrace sustainable development, low-carbon environmental protection and modern technology. They have taken to the new product quite well," she said.

Kong thinks the catering industry is moving in a more healthy, sustainable direction.

"Plant-based meat in China has a new role on the dining table. It still needs perfecting in many respects, including safety, stabilization and flavors. As restaurateurs, we should observe and think from the customers' viewpoint and try to push technical improvements for diners," she said.