Leaders to act on climate change

By Chen Weihua in Brussels and Karl Wilson in Sydney 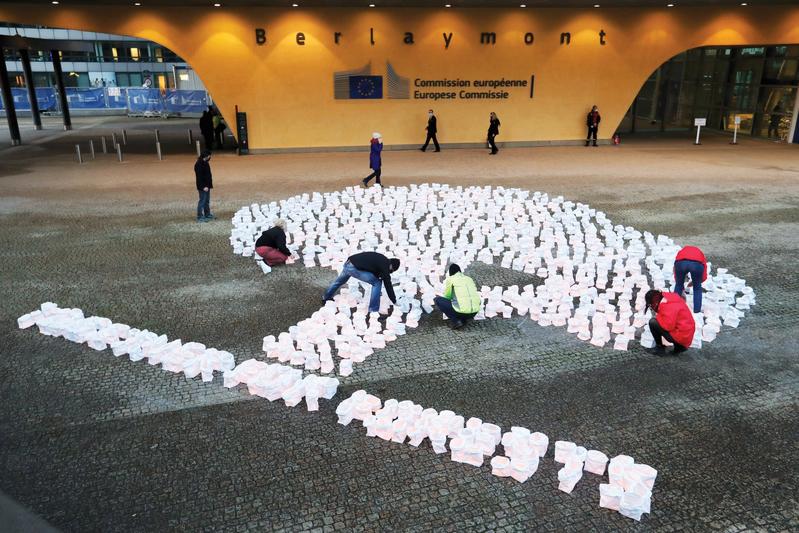 Environmentalists stage a tree design with candle-holding paper bags in Brussels on Dec 14, urging people to come “together for forests”. (ZHENG HUANSONG / XINHUA)

Opening the Climate Ambition Summit 2020 on Dec 12, Guterres, stressed that since the Paris Agreement, “we are still not going in the right direction” and that “carbon dioxide levels are at record highs”.

“I call on all leaders worldwide to declare a State of Climate Emergency in their countries until carbon neutrality is reached,” he said, noting that some 38 countries have already done so.

A 2019 report from the United Nations Environment Programme said that “if we rely only on the current climate commitments of the Paris Agreement, and they are fully implemented, there is a 66 percent chance that warming will rise to 3.2 C by the end of the century”. The target is to keep the rise below 1.5 C.

To mark the fifth anniversary of the Paris Climate Agreement, the one-day virtual gathering jointly hosted by the UN, the United Kingdom and France, and in partnership with Chile and Italy, undoubtedly marked an important step forward for efforts to reduce carbon emissions. The Summit brings together leaders of both developed and developing countries, as well as international organizations, representatives of NGOs, and business leaders.

Despite the pandemic-induced lockdowns, climate change continued its relentless march this year, with 2020 on track to be one of the three warmest years on record.

Atmospheric concentrations of greenhouse gases have kept rising, according to the State of the Global Climate 2020 report released by the UN’s World Meteorological Organization earlier this month.

“The average global temperature in 2020 is set to be about 1.2 C above the preindustrial (1850-1900) level,” WMO Secretary-General Petteri Taalas said in a statement.

“Although we welcome all the recent commitments by governments to reduce greenhouse gas emissions, we are currently not on track and more efforts are needed.”

This year is very likely to be one of the three warmest years on record globally. The WMO’s data sets place 2020 as the second warmest for the year to date, following 2016 and ahead of 2019, according to a news release from the UN agency.

The report said 2011-20 is expected to be the warmest decade on record, with the warmest six years taking place from 2015.

Ocean heat is at record levels and more than 80 percent of the world’s ocean mass experienced a marine heat wave at some time in 2020.

The report, which is based on contributions of dozens of international organizations and experts, shows how high-impact events including extreme heat, wildfires and floods, as well as the record-breaking Atlantic hurricane season, affected millions of people. These events have compounded the threats to human health and security and economic stability posed by the COVID-19 pandemic.

The UN virtual summit will put the world on a path to make substantial reductions in global greenhouse gas emissions ahead of the UK-hosted 26th UN Climate Change Conference of the Parties (COP26) next November in Glasgow.

The secretary-general noted that more countries are committing to zero emissions and mindsets are shifting in the right way.

“On the path to COP26, I urge everyone to show ambition, stop the assault on our planet and do what we need to guarantee the future of our children and grandchildren,” he said.

China sent a strong signal of its willingness to step up its measures on climate change as President Xi Jinping announced more commitments by the country to tackle the global climate challenge. Speaking via video link, Xi said that by 2030 China will lower its carbon dioxide emissions per unit of GDP by over 65 percent from the 2005 level and increase the share of non-fossil fuels in primary energy consumption to around 25 percent.

China will also increase its forest stock volume by 6 billion cubic meters from the 2005 level, and bring its total installed capacity of wind and solar power to over 1.2 billion kilowatts, he said.

UK Prime Minister Boris Johnson said that this difficult year ends with a note of optimism, due to the unprecedented speed with which a vaccine has been produced, thanks to international efforts.

Johnson said: “Together we can use scientific advances to protect our entire planet, our biosphere, against a challenge far worse, far more destructive even than the coronavirus. And by the promethean power of our invention, we can begin to defend the earth against the disaster of global warming.”

Earlier this month, Johnson announced new Nationally Determined Contributions, committing the UK to reduce greenhouse gas emissions by at least 68 percent by the end of the decade compared to 1990 levels.

“Today, we’re putting our foot to the accelerator, in a carbon-friendly way of course, with a Ten Point Plan for green industrial revolution. We want to turn the UK into the Saudi Arabia of wind power generation. Enough wind power by 2030 to supply every single one of our homes with electricity,” he said.

French President Emmanuel Macron on Dec 12 hailed the efforts of the European Union and China in the past few years to advance the Paris Agreement and welcomed “back home” the United States in this global endeavor for which “action must be immediate”.

“I really want to hail the European mobilization and the formidable cooperation during these years with China,” added the French president.

“We have continued to go forward, to work together despite the American choice,” Macron said.

He referred to the decision made in 2017 by outgoing US President Donald Trump to pull out of the legally binding Paris deal adopted in 2015 with an aim to strengthen the global response to the threat of climate change.

Macron also welcomed the decision of US President-elect Joe Biden to rejoin the Paris Agreement. “Welcome back, welcome home!” he said.

“We do not have a lot of time ahead of us and the action must be immediate,” Macron noted. “We must give ourselves a path and credible means to achieve carbon neutrality by 2050.”

The Climate Ambition Summit is open to leaders who are ready to showcase ambitious new commitments, including Nationally Determined Contributions to reduce greenhouse gas emissions, strategies to reach net-zero, climate finance pledges and innovative plans to adapt and build resilience to climate change.

At least 24 countries have announced new commitments, strategies or plans to reach net-zero or carbon neutrality. Guterres said that “commitments from EU countries, the United Kingdom, Canada, China, Japan, the Republic of Korea, and today Argentina and the incoming US administration are establishing a clear carbon neutrality benchmark for G20 countries.”

But he also warned that for the world, “there’s still a long way to go”.

Xinhua and Wang Mingjie in London contributed to this story.