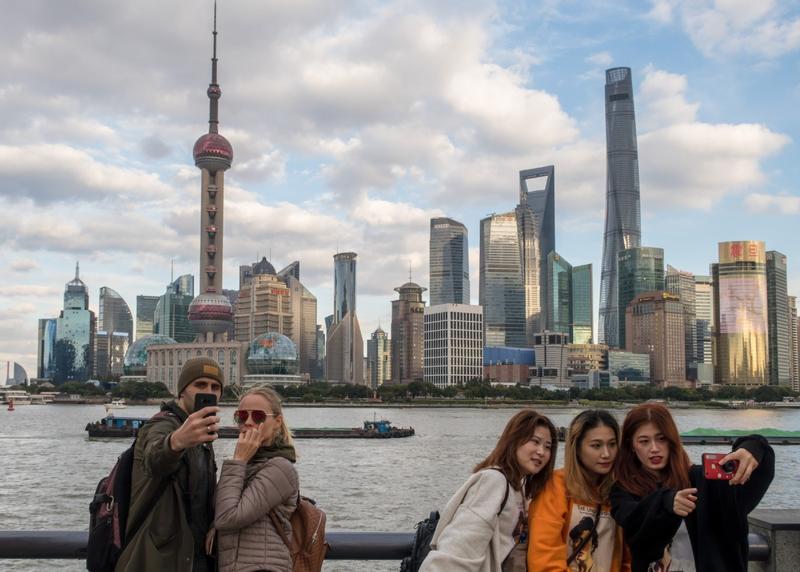 This undated photo shows tourists pose for photographs on the Bund, a major scenic spot on the Huangpu River in Shanghai. (WANG GANG / FOR CHINA DAILY)

China's dual-circulation development pattern is a strategic response to the specific historical phase of the Chinese economic growth and economic globalization.

China has completed most of the peak stage of its rapid industrialization, which was accompanied by a massive trade surplus.

Last year, the manufacturing sector contributed 27.2 percent to the GDP of China. The services sector accounted for 53.9 percent of the GDP, and the percentage will increase further.

China's goods trade surplus fell from US$578.1 billion in 2015 to US$462.8 billion in 2019, according to data released by the State Administration of Foreign Exchange.

In the next 10 years, the country will gradually shift from a trade surplus to a trade balance, with its current account surplus continuing to decline steadily.

If China achieves balance of payments equilibrium around 2030, the contribution of trade surpluses to GDP will decrease gradually. Trade surpluses played a diminishing role as a driver of economic growth over the last 10 years.

It is at this historical phase that trade protectionism and the de-globalization trend represented by the Trump administration have been on the rise. The US raised tariffs on Chinese imports, reducing its demand for Chinese products to a certain extent, and stopped some key technology exports to China.

Facing protectionism in terms of supply and demand, China will promote dual-circulation, which takes the domestic market as the mainstay. This is a strategic response to protectionism, rather than an act of cutting off China from the outside world and refusing to open up.

China's decision-making mechanism for investment is very mature, but the mechanism for stimulating consumption is not mature enough compared with that of the western countries. As a result, it is natural for the Chinese government to put greater emphasis on investment when the country is facing economic slowdown.

To tackle the COVID-19 pandemic, China announced that it plans to issue 3.75 trillion yuan (US$573.1 billion) of special-purpose local government bonds this year. The funds raised through these bonds should primarily be used to invest in major sectors and major projects, according to the Ministry of Finance.

It is estimated that government-led infrastructure investment, real estate investment, and corporate investment in facilities and equipment may drive more than 80 percent of China's GDP growth this year.

When it comes to expanding consumption, however, China's decision-making mechanism and efficiency still need to improve. For example, if someone proposes allocating 3 trillion yuan to middle-and low-income earners, the proposal is hard to get approved by China's leading policymakers. Many would worry that ordinary folks will save the money rather than spending it.

In my opinion, China needs to take more effective measures to expand consumption. Apart from using fiscal policy to boost consumption, such as allocating money to low-income earners, China should make a difference by using monetary policy, such as lowering interest rates at the proper time. Not cutting interest rates will encourage saving.

As the pandemic wanes, the social order of most Chinese regions has been restored to normal but consumption has not yet recovered fully.

Data from the National Bureau of Statistics show that total retail sales of consumer goods fell 1.8 percent year-on-year to 3.35 trillion yuan in June. This has a lot to do with insufficient measures to boost consumption.

In the first nine months of this year, total retail sales of consumer goods declined by 7.2 percent year-on-year to 27.33 trillion yuan. Compared with 41.16 trillion yuan in 2019, there is a huge gap that can be hardly filled in the last three months.

If there is a contraction in the total retail sales of consumer goods this year, it would be a negative annual consumption growth for the first time since China started the reform and opening-up process. Therefore, from a short-term policy perspective, stimulating consumption should become the top priority to expand domestic demand.

It is not enough to boost consumption simply via fiscal subsidies and interest rate cuts. China still needs to promote deeper-level reform, including reform of income distribution.

Fostering the middle-income group would be a long-term solution to bolster consumption. The government should cut excess profits made by monopolies in the financial sector and land monopolies, and increase the earnings of workers, technical staff and managers during the primary distribution of income.

In the future, China's economic growth will be mainly driven by domestic demand but exporters should still have a global vision, rather than striving for domestic sales of goods originally produced for export.

Domestic circulation and international circulation are mutually reinforcing each other. The new economy refers to new, high-growth industries that are on the cutting edge of technology, including 5G, artificial intelligence, big data and the internet of things. Such fields are believed to be the driving force of economic growth, and will take an increasingly large part of the economy.

In 2019, the value added of the tertiary industry accounted for 53.9 percent of China's GDP, according to the National Bureau of Statistics. The number may increase to 70 percent or even higher.

As a rising developing country, China will continue to make contributions to globalization and free trade. Meantime, the nation should also build a more balanced trade structure by relying less on exports to the US and increasing exports to member countries of the Association of Southeast Asian Nations, as well as countries and regions involved in the Belt and Road Initiative.

Moreover, China should accelerate efforts to improve its science and technology research, development capacity, and its ability to promote domestic circulation in major industrial supply chains. It will also continue to play the role of a stabilizing force in global financial markets.

The writer is director of the WANB New Economy Research Institute. The views don't necessarily reflect those of China Daily.