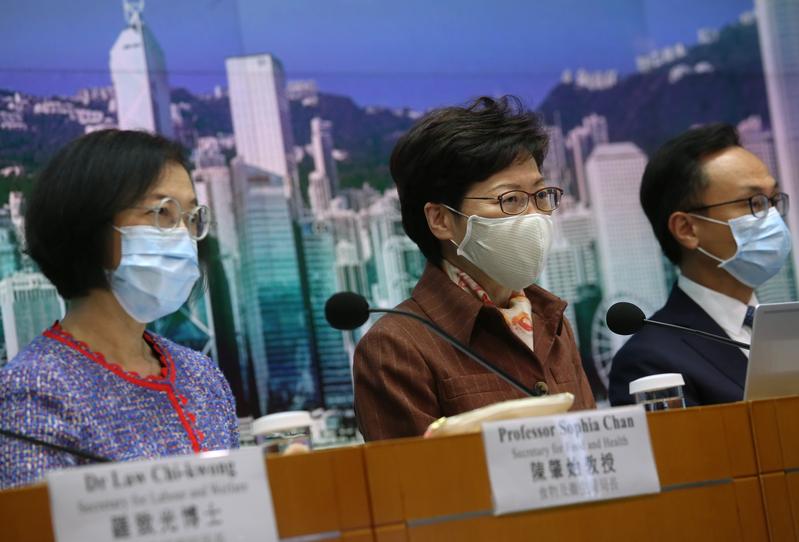 Describing as a “breakthrough” in the city’s vaccine procurement, Lam said at a news briefing that the government has reserved 7.5 million doses from Beijing-based Sinovac Biotech and another 7.5 million doses jointly developed by BioNtech and Pfizer.

The government is planning to provide free COVID-19 vaccine for all its 7.5 million residents and hope to vaccinate most of them in 2021, Lam said. Health workers, senior citizens, care center workers and people with chronic diseases will get priority access to the vaccine. She iterated that the government would purchase vaccines at least twice the size of Hong Kong's population.

Speaking at the same briefing, Secretary for the Civil Service Patrick Nip Tak-kuen said that starting Dec 22, arrivals from foreign countries and regions will need to undergo a 14-day quarantine at 36 designated hotels. The government will arrange special shuttle buses to transfer them from the airport to the hotels.

Nip estimated that the 12,000 hotel rooms enlisted across the city can meet the demand of inbound travelers.

The cluster linked to a Yata supermarket in Sha Tin saw two of its employees and three of their close contacts confirmed infected. The group now has 17 patients.

Two new patients on Friday were linked to the dance cluster - the city’s largest cluster so far with more than 700 confirmed cases.

One new patient is a resident of Block 6 of Richland Gardens in Kowloon Bay. Eight of the 22 environment samples collected from the block tested positive for the virus, Chuang said. All residents of the block had been ordered to undergo mandatory testing.

New clusters also emerged in other residential blocks. Three new patients were residents of Lung Poon Court in Wong Tai Sin, five at Kwong Fuk Estate in Tai Po and seven at Po Tat Estate in Kwun Tong, according to Chuang. Residents at the affected estates will be tested for the virus.

As of 9 am Friday, a total of 1,148 confirmed patients were being treated in hospitals, including 44 in critical condition and 65 in serious condition, Hospital Authority’s Chief Manager Sara Ho said.