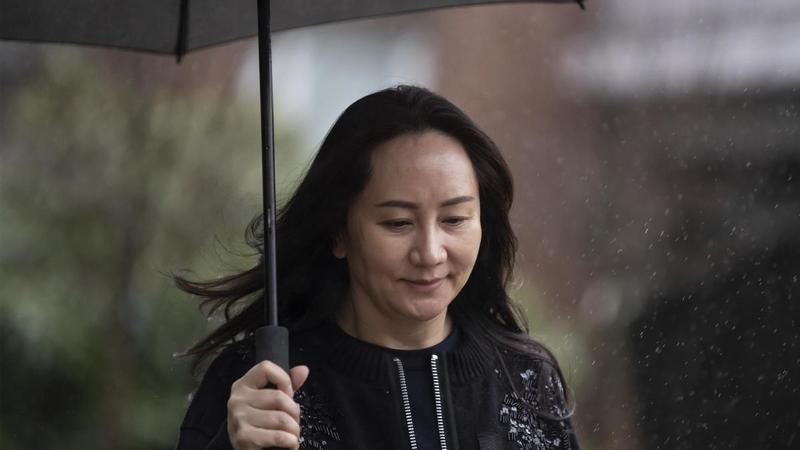 Meng Wanzhou leaves her home to attend a hearing in Vancouver on Tuesday. (DARRYL DYCK / THE CANADIAN PRESS / AP)

Chinese Foreign Ministry spokeswoman Hua Chunying said on Friday that Huawei Chief Financial Officer Meng Wanzhou has not committed any of the crimes of which the United States and Canada have accused her, that she is the victim of political persecution and that the US is using the case to contain Chinese companies.

"We urge Washington to drop the extradition warrant and arrest order on Meng," Hua said. "We urge Ottawa to release her and allow her to return to her home country as soon as possible."

We urge Washington to drop the extradition warrant and arrest order on Meng. We urge Ottawa to release her and allow her to return to her home country as soon as possible.

Hua's remarks came after the Wall Street Journal reported, citing a person familiar with the matter, that US prosecutors are discussing a deal with lawyers for Meng to resolve criminal charges against her. The deal could signal a potential end to the case that has strained ties between the United States, China and Canada.

Negotiations between Meng's attorneys and the US Justice Department picked up after the US presidential election a month ago, the person said, but it is still unclear what kind of deal could be struck.

US Justice Department spokesman Marc Raimondi declined to comment, as did Huawei and a spokeswoman for Canadian Foreign Minister Francois-Philippe Champagne.

Meng was arrested at the airport in Vancouver in December 2018 on a US warrant. The 48-year-old faces bank fraud charges for allegedly misleading HSBC about Huawei's business dealings in Iran, which was subject to US sanctions. Both Meng and Huawei denied the claims. The case has plunged Canada-China relations into crisis.

Further negotiations are expected to take place on Friday, the person cited by the Journal added.

Under a "deferred prosecution agreement" with the US Department of Justice, Meng would admit to some of the fraud and conspiracy charges related to the alleged violations by Huawei, the Journal said on Thursday.

Both sides are hoping to reach an agreement before the end of the administration of US President Donald Trump, although Meng is reluctant to agree to a deal that would see her admit to wrongdoing, the Journal said.

Meng's lawyers have so far tried to derail the extradition procedure by arguing that her rights were violated during her arrest.

The US has placed heavy sanctions on Huawei that bar foreign semiconductor makers from selling chips made using US technology to the firm.

Several Western countries have banned, or are considering pulling, Huawei equipment from their 5G networks due to concerns over so-called Chinese espionage.

Huawei officials have said the attacks are motivated by a US desire to bring down a successful business rival. Meng is due back in the British Columbia Supreme Court on Monday, as she fights extradition to the US.