By Zhou Mo and Chai Hua in Shenzhen 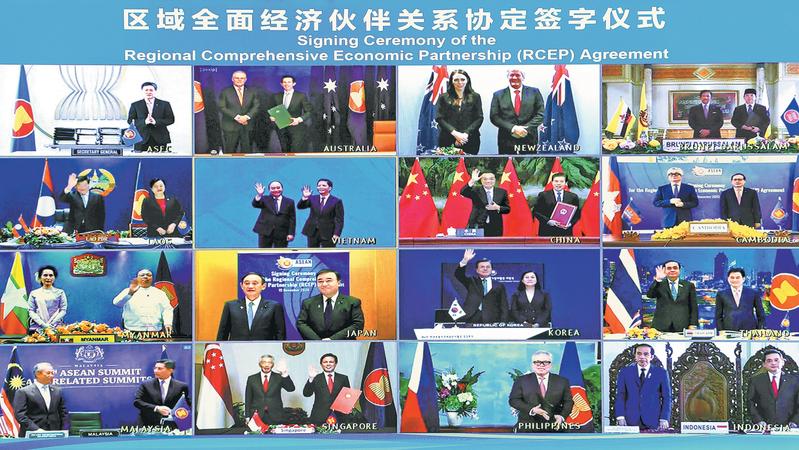 Leaders and trade ministers from ASEAN and the other five Regional Comprehensive Economic Partnership countries pose for a group photo at a video conference hosted by Vietnam on Nov 15. (ZHANG LING / XINHUA)

The Guangdong-Hong Kong-Macao Greater Bay Area can expect a big leap in its bid to become a modern-industry hub and global center for innovation and technology, propelled by the world’s largest free-trade zone.

Business leaders and experts say the Regional Comprehensive Economic Partnership, inked on Nov 15 by 15 Asia-Pacific nations, including three of Asia’s four largest economies with the exception of India, will create new growth opportunities for various sectors in the region.

The pact was signed at the virtual summit of the Association of Southeast Asian Nations in Hanoi, capital of Vietnam, by the 10 member states of the regional grouping, as well as China, Japan, South Korea, Australia and New Zealand, which together account for nearly 30 percent of the world’s population and 30 percent of global GDP.

The effects of the trade pact will be mainly seen in two aspects — trade and investment — said Mao Yanhua, professor at the Institute of Guangdong, Hong Kong and Macao Development Studies and associate dean of the Institute of Free Trade Zones at Sun Yat-sen University in Guangzhou.

“From the trade perspective, the RCEP, which will greatly promote international trade, will help strengthen the Bay Area’s position as an international trade and shipping center. From the aspect of investment, more foreign investors will venture into the Bay Area under the agreement, creating increased opportunities in the region’s manufacturing industry,” he said.

The deal will also help the region in building itself into a global technology and innovation hub.

“Through the agreement, the Bay Area could give better play to its unique advantages to attract outstanding technological enterprises and talents in other member countries to the area. This will require further liberalization of cross-border trade in services so as to facilitate cross-border flow of high-end technological and innovative resources,” he said.

In the first 10 months of this year, ASEAN was Guangdong province’s largest trading partner, according to Customs statistics. Foreign trade between the two sides reached 865.14 billion yuan (US$131.6 billion) — up 7.3 percent year-on-year.

Zhang said setting up a coordinated mechanism is the core for the Bay Area to further tap the huge market, and major cities in the region should give full play to their specialties, such as Hong Kong’s financial sector, Shenzhen’s innovative technology and Guangzhou’s service industry.

The first step is to study the business environment of RCEP member countries and promote the export of products, services and digital innovations, he said.

“After we’ve learned the local environment and business relations through research and trade, we could start investing in the entire industrial chain and establishing the real economy,” he added.

But he pointed out that the signing of the free trade deal has also presented new challenges. Japan, South Korea, Singapore, Australia and New Zealand have strong capabilities in scientific and technological innovation, advanced manufacturing, modern services, trade and shipping.

Foreign companies, a large component of the Bay Area economy, should adapt to the changes quickly as new business models and demand will emerge, he said.

“Manufacturers should speed up intelligent transformation and companies that are targeting the domestic market also need to keep up with the actual demand of high-quality development,” Zhang explained.

Businesses from various sectors are equally upbeat about the Bay Area’s future under the new agreement, with some planning to increase input into the region.

“With its impressive speed of new technology adoption and favorable policies from the (central) government, the Bay Area will play a pivotal role in the RCEP to help further lower transaction costs and improve logistics efficiency among its 15 partnership countries,” said Henry Ko Hok-han, managing director of Flexport Asia Ltd, a digital freight forwarder.

So far, about 80 percent of the company’s shipments are from Asia.

More importantly, Ko emphasized they could do this by setting up and “exporting” new standards, models and services, such as cross-border e-commerce, data-driven distribution, smart delivery systems and green technologies in logistics for sustainability.

Eyeing the new investment and growth opportunities created by the RCEP, Ko said Flexport Asia has decided to continue doubling down on the intra-Asia lanes and investing further in its data science and technology unit in Shenzhen.

The company also plans to expand its staff base by about 50 percent in the Bay Area, Shanghai and Singapore next year.

Song Guoxin, president of China Cold Chain Industry Investments Group, said the reduction in tariff rates under the agreement is expected to cut the costs of imported frozen products by 5 percent on average within one or two years, potentially lifting the trade volume by 50 percent.

Song noted that his company is a newcomer to the cold chain industry with only several years of history, which makes it hard for it to take a dominant position in the market. But the signing of the RCEP will change the business landscape and offer fresh opportunities.

“We will grasp the historic opportunities to gain a bigger share in the expanded market,” he said.

Placing high hopes on the Bay Area’s prospects, Song said they will pour more resources into the southern region. “Guangdong accounts for roughly 25 percent of the country’s total food imports. Shenzhen, meanwhile, takes the lead in innovative development of supply chain finance. The region will be the focus of our business in the future,” he said.

Zhu Yanjun, general manager of Shenzhen Tomax Supply Chain Management, highlighted the role the government and business associations will play in the process.

“We hope the government and business associations could serve as a bridge between Chinese and foreign enterprises and build a platform to link them up, to help them better understand each other and enjoy the benefits brought by the trade pact,” he said.

Li Gang, president of the Shenzhen Food Importers and Exporters Association, said the RCEP will have a profound impact on the flow of food products, brand building and agricultural development in member countries.

The association will be more proactive in helping Chinese industry players expand their presence in other RCEP member countries by launching promotion activities and organizing meetings, he said.