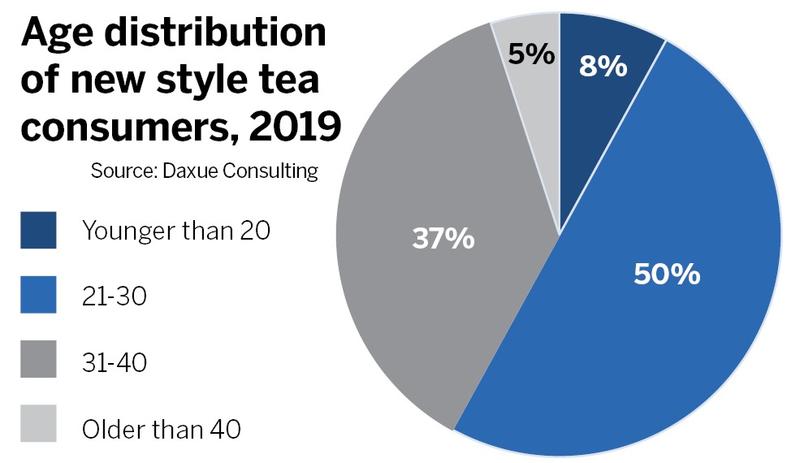 While China’s growing coffee culture may have disrupted a millennia-old tradition of drinking tea and forced some shops out of business in the process, the once staid drink has gained a new lease on life with innovative milk tea flavors taking the country by storm as the beverage of choice for bright, young things.

There is certainly strength in numbers.

Once the Chinese economy fully recovers from the pandemic, it will not be surprising to see middle-class Chinese consumers going back to their premium bubble tea consumption routine, same as they would for resuming traveling once the pandemic is truly controlled

Avid young consumers rave about the “life-saving beverage” online, with some saying “there’s nothing you can’t handle with a cup of milk tea. If there is, then take two cups.”

“Milk tea is far more than just a drink,” said Yang Lu, a 29-year-old project manager at a Beijing-based telecommunications company. “For me and most of my friends and colleagues, it is an essential item, something we often order as a feel-good treat or afternoon snack to survive a hectic day at work.”

With more than 140.5 billion yuan (US$21.36 billion) in sales in last year, the runaway success of milk tea in China is well-proven. The super sweet market today is on pace to mint millions of new style tea chains and would-be listed firms such as Shenzhen-based Naixue’s Tea and Heytea, a brand originating from Guangdong province.

Their cold-brewed teas served with fruit, topped with cheese, and sold with a soft “euro-bake” pastry have bewitched Chinese consumers. People will wait in line for hours to get a cup or pay twice the price for those who provide wait-in-line service for others. The nationwide milk tea fad is changing perceptions about a drink traditionally consumed by older generations.

“Monthly consumption of new style tea drinks reached a new high in 2019,” according to 36Kr, a publicly traded database and market research venture that tracks and advises startups. Consumer surveys reveal “that 83 percent of drinkers purchase five to 14 cups of freshly brewed tea every month, and 72 percent of customers spent 200 yuan on their monthly tea fix,” according to 36Kr’s consumption white paper released in February.

Females are the core clientele across all age groups, contributing more than 70 percent of purchases, followed by post-90s males (aged 21-30).

“In China, new style tea drinks are driven by the pursuit of health and a more sophisticated taste in bubble tea,” said Peter Wong, an analyst at market research provider Euromonitor International. “Before the boom of new style tea beverages, there had already been a great deal of street shops selling traditional bubble tea.”

Overall, demand for bubble tea was rising, and shops, such as CoCo and Mixuebingcheng, tended to focus on medium- and low-income consumers, Wong said. Nevertheless, as disposable incomes increased, taste and demand among Chinese consumers rose. Key players such as Heytea and Naixue’s Tea have energized demand via cheese tea and fruit tea and with the introduction of reduced-sugar options, he noted.

“These banners brought not only a more complex taste, but also an element of health and wellness to consumers. Likewise, their Starbucks-like stores present a comfortable ‘third place’ for customers,” Wong said “Therefore, even though both are high-end beverages, consumers are still willing to pay a premium for them. Consumers have steered their bubble tea consumption toward greater sophistication, trading up from street stalls to salubrious cafes.”

According to Euromonitor International, Heytea and Naixue’s Tea in China grew at compound annual growth rates of 53 percent and 368 percent, respectively, in 2015-19.

The booming bubble tea industry “should serve as a prime example of the country’s consumption sophistication across wide-ranging industries,” Wong said.

From the mass offerings of roadside stores like CoCo and Mixuebingcheng to the roaring success of Heytea and Naixue’s Tea, with the meteoric rise of the Chinese economy, “the entire bubble tea consumption trend has been enhanced, in a sense that sophisticated consumers will now have greater demand for bubble tea and bubble tea shops, from pursuing different tastes in their beverages to having an ambience for their drinks”, he said.

For years, the dizzying growth of the world’s second-largest economy has given birth to a new breed of “super consumers”, who have gone beyond mimicking the patterns of the more sophisticated Western shoppers to being trendsetters and innovators.

To be sure, it’s by no means an easy task to understand these super consumers. Peng Chaoman, a franchisee of milk tea chain Yi Dian Dian in Chengdu, Sichuan province, highlighted the concept of “punk wellness” among young people — a madly popular concept referring to youth who want to be healthy, but still indulge and stay up late.

“There are an awful lot of research findings warning that a cup of milk tea can contain a meal’s worth of calories or caffeine equivalent to eight cans of Red Bull,” Yang said. “Our attitude is: Stay calm and drink on. Then let’s work out in the gym.”

“When we develop new products, a delicate balance must be struck between consumers’ pursuit of wellness and their desire for a taste flash and having fun,” Peng said.

Though critics may argue that the highly sought-after milk tea brands are just a product of well-crafted “hungry marketing” and whimsical branding, it cannot be denied that they have been successfully riding on the rising wave of social media influencers and online lifestyle publications, fitting in well with the “camera eats first” and “pretty is power” culture in an aesthetics-driven era.

“For a new generation of fad-hungry, selfie-snapping customers, bubble tea becomes more of a new form of social networking,” Yang said. “The latest fads and most trending news about the sparkling drinks and promotions always allow me to pick up the threads with ease in daily conversations.”

The traditional beverage has been reinvented for a new generation of fans, as a pretty cup to carry around, a delicious drink to share with intimates and a perfect theme for an online post. More importantly, just like Starbucks took off in China by combining convenience with a desire to denote cosmopolitanism, phenomenally popular milk tea brands also look to sell an appealing urban lifestyle.

For Yang, the welcoming lounge space in Heytea and Naixue’s Tea, located in upmarket malls and resembling an opulent coffee shop, makes it a hip place to socialize over drinks — although the real issue is getting a table in the store, which is not easy. Heytea’s minimalist concrete interiors, neon signs and decorative details with industrial style are must-use selfie background imagery for social media posts.

The major conclusions that can be drawn from the soaring popularity of bubble tea in China is that Chinese are still tea drinkers, according to the latest report from market research company Daxue Consulting released in April.

Despite so much talk about China becoming a realm of coffee, tea remains a staple among its people. Overall annual tea consumption in China far exceeds that of coffee, with figures expected to reach 669,500 tons for tea, and 80,718 tons for coffee in 2020, according to Statista.

The time-honored tradition dates back to the Tang Dynasty (618-907), when tea became a mainstream drink in the nation, and the trendy beverage of bubble tea has its historic roots in ancestors’ practices where black tea was often drunk with butter, cream, milk, and other additives like salt and sesame.

As China’s consumers thirst for milk tea is unquenchable, some are betting big on the country to incubate its own food and beverage giant like Coca-Cola. But Wong says there is a still long way to go for that to happen.

“Currently, Heytea and Nayuki (Naixue’s Tea) aside, we are seeing a great deal of Chinese food and beverage companies such as Tsingtao that have regional reach in their respective industries like beer, but none of these has the scale of Coca-Cola,” Wong noted.

The success of Coca-Cola, he pointed out, lies in its century-long brand building and formula forming efforts as well as in the rise of American power. When the United States succeeded in leading the world in the 20th century, its companies prospered in a sense that corporate America set an example for companies in other parts of the world to follow.

“Therefore, with the continued rise of Chinese power, Chinese companies will be gradually able to set rules and yield greater influences over the corporate world in the future,” Wong said.